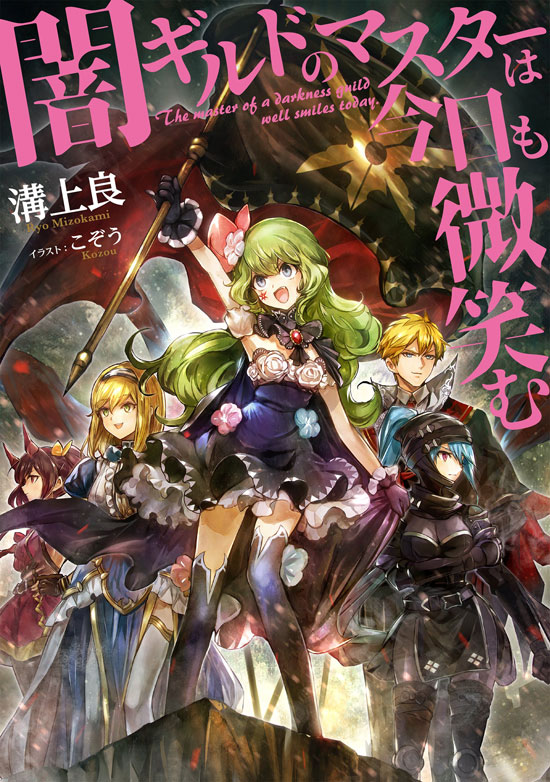 One entry per line
Syosetu
TO Books

I am the master of a certain dark guild.

Including me, there are only 10 other consistent members in this guild. However, all of them are like daughters to me… is what I think.

Since this is a dark guild, we act without standing out too much. However, it seems like everyone has been acting a bit too weird recently.

These are recommendation lists which contains Master’s Smile. You should give them a visit if you're looking for similar novels to read. Alternatively, you can also create your own list.
More Lists >>>

Normally, I despise a MC this dense, but here I can't help but feel like his denseness is keeping the world from being destroyed. I also appreciate that half the story (?) thus far has been him going around and patting cute girls. Can't help but look forward to more!
30 Likes · Like Permalink | Report

I'd been extremely hopeful given all the positive reviews this series has, and the translation appears to be great (I can't read Japanese so I can only assume) - but I was ultimately disappointed by this series. 10 chapters in and the story just appears to be a tr*shy harem version of overlord: The key characteristics of this are: - Incredibly OP characters - All of whom are girls and in love with the MC This series is for you if you want to read about edgy girls c*ckblocking each other over a dense MC
25 Likes · Like Permalink | Report

I didnt like this. You are thrown into the story without any background. I read up to 15 chapters, and it is literally all the guild members fawning over the master, and the master not wanting to understand. If you're into those things with zero world building, and ZERO background, by all means go for it. But this isnt for me. All you really know is their name, some character attributes and that they are all OP. Nothing progresses.
19 Likes · Like Permalink | Report

This is one underrated story. Why? Because people dropped it in the first 3 chapters that's been translated by that meowmeow maniac. If you want to have the serious translation start reading from Daoist. Although it resembles overlord a bit it has a unique charm that would make you want to continue reading it. But if you're not a fan of mildly dark novels I can't blame you.
15 Likes · Like Permalink | Report

Just. No. This is basically a lesson on how not to begin your novel 101. This may quite possibly be the worst introduction to a novel I've ever read. Not only is there absolutely no context to begin with, but the first 7 chapters ARE LITERALLY THE EXACT SAME. No seriously, it's like the author copy and pasted the same chapter 7 times but with the names slightly altered. You don't know who these characters are, you don't care about any of them, and yet the author seriously thought it... more>> was a good idea to show them "being op" and cutting down random mob characters for 7 chapters straight. And here's another thing; THERE'S WAY TOO MANY CHARACTERS INTRODUCED AT ONCE. In the span of 7 chapters, the author throws 8 or 9 characters at you and they all do the exact same thing each chapter. There's differences in powers and appearance, but they may as well all be the same character. You can't just throw a bunch of names without any context at the readers and expect them to be able to follow. This novel may get better or it may not. Quite frankly, I don't have the motivation to go any further after the author botched the beginning that hard. <<less
14 Likes · Like Permalink | Report

Super cute yet mildly disturbing at the same time. Would reccommend
10 Likes · Like Permalink | Report

Since I dont have anything to read anymore, I tried this with "meh" MC is basically a di*do, a herbivore di*do that somehow talks Well if you dont mind some quite edgy girls that have their own characteristics fighting over some braindead MC (I'll consider him braindead because atleast upto 13th chapter, he haven't show some atleast a proper attitude for a master of a guild) then youre good Heck, how would even the MC didn't notice that they are already a dark guild if he is doing the paperworks, negotiation? Nah, if... more>> he is that one managing that, he could do more than just being stup*d This might be judging too early but I lost my energy to read after the interactions with the girls, he cant show atleast a little bit of his authority because they are like his daughters, he'll just runaway. By the flow of things, I bet all he can do is paperworks, be treated like a d*ldo, being a battery, and down himself to the earth <<less
8 Likes · Like Permalink | Report

One sentence summary: Overpowered girls who are in love with their guild master keep slaughtering other people for world domination. Basically similar development for each chapter with no surprise or strategy elements. Characters are not impressive. Novel dropped.
7 Likes · Like Permalink | Report

I'm giving this 2 stars, but one of these stars is for the translator because they are the only reason I kept reading it so long. I'm not really sure how to explain this, because it's basically the plot of a p*rn novel without the p*rn.
Little to no information about the world or characters. We get introduced to random female characters with basically their name and how strong they are and that is about it... oh and of course they all love the main character. We get some random fights here... more>> and there. Shoot I would even settle for a p*rn scene and we don't even get that since half the time the girls are fighting each other. <<less
6 Likes · Like Permalink | Report

Not bad, it's pretty much just a story about a lot of girls who couldn't possible love the MC more fighting eachother and protecting their master from everything and anything. Even though they know he's super OP, they won't even allow anyone to get close to him. The MC is a super old human easily quite a bit above 100 years old and with extreme powers. However, he's also ridiculously dense when it comes to his "daughters" and even his own powers. He seems to believe himself to be quite weak,... more>> at least far weaker than the girls who are extremely powerful. The girls, on the other hand, seems to know of his real prowess and that he's far more powerful than they are. So, he's just sitting around being protected by the girls while not even being that concerned with anything, the girls won't even let him go out on jobs. It's not bad, it gets more interesting as it goes along. The first 18 or so chapters (can't remember the exact amount) aren't that interesting because it's just a kind of introduction/description of all the girls, first from their perspective as they're fighting off some people who wants to get to the MC and then from the mc's perspective as he goes through his castle and meets all the girls, one by one. After that, the "real" story starts and it finally gets more interesting. Not anything revolutionary, but it's a good waste of time. <<less
6 Likes · Like Permalink | Report

Too early to make an substantial opinion on the story but has started out very nicely. I am interested to see how the interaction between the various yandere characters will play out, and I sincerely hope that the grade of this novel won't fall after the initial disturbingly cute factor has worn off. Although the first translators "meows" were a little annoying, I find it hardly fair to judge the story and translator by such an addition. "Daoist", the second translating group has laid off on using "meows" and the translation... more>> flows fairly well, with little to no obvious grammatical or usage errors. I just wish that the translations would go faster so I can read the rest of the story. As can be discerned from the synopsis and the tags, the story is about a guildmaster and his yandere guild members, all of whom are girls. The guildmaster's charm might seem a little off putting, especially since no reasoning has been given to why he's so attractive, however the guildmaster looks to be super dense so any romantic portion of the story might take a while. Read only if you like sort of fluffy, bordering on creepy yandere and a dense MC. I have a feeling that the plot will be fairly lacking and the story will just focus on the yandere interactions between the MC and his rather sizable following. <<less
4 Likes · Like Permalink | Report

this is a thing you can read, I guess, if only for its weirdness. I think most of us still love this kinda tr*sh even though it's godawful. Ultimately, I don't think you can make a whole +300 chapters novel out of this, like, dense protagonist + harem + misunderstandings kinda cancel each other out. Most of the chapters consist of the girls bickering with each other back and forth and being horny on main while the dude pretending he doesn't see anything even though he's some immortal eldritch skinwalker... more>> or something. Basically, it's coomer bait with filler between the cooming <<less
3 Likes · Like Permalink | Report

chap 58 really got me it's getting irritating at that point he's OP but looks down on himself too much, he's so wimpy in his attitude that it's irritating ... more>>
Spoiler

here we have a strong MC (at least it's what it seems to me), so strong that all the higher ups across the land has come to fear him, wants to cut off his arms just to get out of a hold of some small fries (he was "taken hostage"). It should be pointed out that he's gonna dismember himself infront of one of his supposed daughters (just OP guildmates he raised) that loves him very much (ahem yandere). He's gonna mentally scar someone he's supposed to protect (cause she might "sacrifice" her dignity for his freedom)

[collapse]
I'm gonna say it again, he looks down on himself too f*cking much, yeah I get the trope where the MC is dense about his OPness but come on it has to have to some limit, all I can say is that in this novel, it wasn't done right it's not funny, it's just irritating <<less
3 Likes · Like Permalink | Report

They weren't able to give the world to MC due to unseen circumstances. Lol. Its not even harem, since only the girls fawns over MC, while MC only sees them as family

I found this scenario where all the yandere girls are demonstrating their sexual desire for the protagonist at the same time that he basically sees them as his daughters quite amusing. one criticism I would make is the fact that the protagonist underestimates his own abilities to an absurd level, because the moment he realizes that his daughters' lives are in danger he gets involved to save them and easily defeats the opponent he was giving difficulties for his daughters and yet he thinks he is weak.
1 Likes · Like Permalink | Report

This is good harem, I love yanderes. Hope someone picks this up and completes it, cause it seems like some groups just mass translate for a week and then drop it until another group picks it up months later. Reason its not 4 stars is cause MC has no sexual attraction to any girl, he also doesn't know how op he really is.
1 Likes · Like Permalink | Report
Leave a Review (Guidelines)
You must be logged in to rate and post a review. Register an account to get started.