Novel Updates
RegisterLogin
Theme
Search
Your changes has been saved.
Advertisements
Magic? Muscle Is Much More Important Than Such A Thing!

Home >
Novel >
Magic? Muscle Is Much More Important Than Such A Thing! 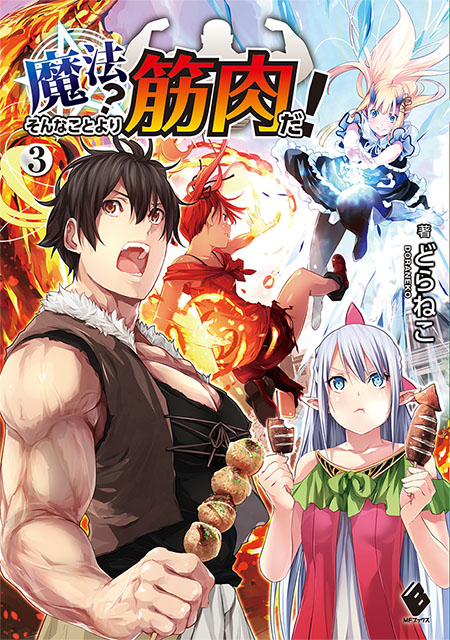 One entry per line
Rerushi

There was a youth who lived deep inside a Forest, his name was Yuri.

After he trained his body for long, he achieved a special trait which made his body able to withstand almost every kind of magic.

One day, there was a beautiful elf named Firia, who got lost and arrived at his house.

Yuri, who was attracted to see the world, together with Firia, they set out on a journey around the world.

“Yuri-san, can you use magic?”

“Of course I can. It’s called muscle magic.”

“In exchange of magical energy, I use my muscles to emit a powerful magic.”

“That isn’t magic but simply a feat of strength.”

This is the tale of a youth who chose to polish his muscles and journey around the world together with a peerless beautiful elf.

These are recommendation lists which contains Magic? Muscle Is Much More Important Than Such A Thing!. You should give them a visit if you're looking for similar novels to read. Alternatively, you can also create your own list.
More Lists >>>

One chapter so far, while I may not usually judge a work so soon, I feel justified with this novel. I feel like it is going to be really generic, we already got a op jap MC, with a cute waifu elf girl who exchanged long dialogues with MC that ultimately mean nothing but to make the waifu look moe. We already got reaction chapters of amazement towards our op MC. The only thing that is different is the comedic aspect of "muscle magic". Which just really means our MC is... more>> strong and immune to all magic <<less
19 Likes · Like Permalink | Report

MUSCLE! ALL THAT YOU NEED IS MUSCLE! I love this novel. The characters are funny, although the story is the usual web novel pace. It goes quite fast, without much though, but it's nice and the comedy is good, so you migh as well enjoy the ride. If you came here expecting a tragedy story with twists and turns, this is not for you.
12 Likes · Like Permalink | Report

Grammar: 2/5
Story: 2.5/5
Writing: 2~2.5/5 First of all, the grammar is quite bad. The tenses jump between past/present tense in almost every sentence. The entire thing is rife with mixed word usage, awkward wording/phrasing, misspelling, and the above noted tense intermixing in practically every sentence. The story while slightly original in it's premise also seems to lean extremely heavily on the usual fantasy OP MC with a witless Female lead who follows the MC everywhere being amazed at his OP-ness (pun intended). The writing... I can't really get a grasp... more>> for the author's style since the grammar is difficult to muddle through. It's possible the original author had written this with a very humorous style of writing with witty commentary and the like, but currently nothing seems to really come through other than a rather ordinary story about some OP-guy pulling ridiculous stunts while amazing a rather lack luster female lead. All in all, not really worth the read unless you don't mind the grammar, in which case it might work as a comedy piece. <<less

It's the usual overpower protagonist and cute heroine tale except for one thing.
Our hero is a muscle pervert who only wants to use muscles, train muscles, and admire muscles. And honestly that saves the whole thing from being plain generic.
So read if you want a muscle maniac hero.

Phew~ Found this just today, and finished it to last chapter in one go. My impression so far is it has quite unique feeling, with templates here and there, but still feel good and not kind of forced to be there, like, it's not your everyday story where the MC is a muscle daruma that can transform like a hulk. Character wise, it was quite unique (like I said above), and while the heroine is a bit template tsundere-airhead-beauty, she not that template and have her own personality than most JP... more>> LN/WN heroines. While the comedy is not there (yet?), I quite enjoy the MC and heroine exchange. <<less
3 Likes · Like Permalink | Report

This is a comedy! Going into this nonsense for any other reason than "Haha muscle man and narcissist elf do funny thing" is unreasonable. You're barely going to find plot here. You're not going to find characters here. Hell, you'll barely even find moe here. If you let yourself laugh and imagine the scenarios laid out then you'll probably laugh.... more>> This isn't even a face-value isekai, it barely constitutes the genre other than the obvious fact that Yuri is probably Japanese. This thing has a manga too. If you can't deal with the (admittedly poor) translation quality and you think the premise is funny you should check it out. Otherwise, the people trying to judge this as a real story are ridiculous. <<less
1 Likes · Like Permalink | Report
Advertisements
Leave a Review (Guidelines)
You must be logged in to rate and post a review. Register an account to get started.