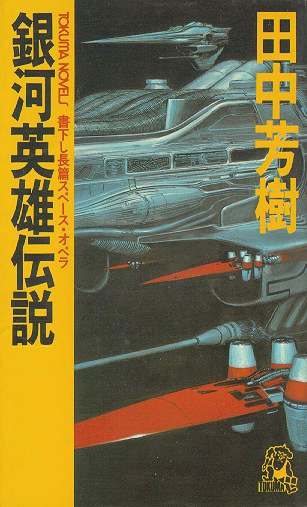 One entry per line
Tanaka Yoshiki

Status in Country of Origin. One entry per line
10 Volumes (Complete)

One entry per line
Tokuma Shoten

One entry per line
Viz

The story is staged in the distant future within our own Milky Way Galaxy, approximately in the late 36th century. A portion of the galaxy is filled with terraformed worlds inhabited by interstellar traveling human beings. For 150 years two mighty space powers have intermittently warred with each other: the Galactic Empire and the Free Planets Alliance.

Within the Galactic Empire, based on mid 19th century Prussia, an ambitious military genius, Reinhard von Müsel, later conferred Reinhard von Lohengramm, is rising to power. He is driven by the desire to free his sister Annerose, who was taken by the Kaiser as a concubine. Later, he wants not only to end the corrupt Goldenbaum dynasty but also to defeat the Free Planets Alliance and to unify the whole galaxy under his rule.

In the Free Planets Alliance Star Fleet is another genius, Yang Wen Li. He originally aspired to become a historian through a military academy, and joined the tactical division only out of need for tuition money. He was rapidly promoted to an admiral because he demonstrated excellence in military strategy in a number of decisive battles and conflicts. He becomes the archrival of Reinhard, though they highly respect one another. Unlike Reinhard he is better known for his underdog victories and accomplishments in overcoming seemingly impossible odds and mitigating casualties and damages due to military operations.

As a historian, Yang often predicts the motives behind his enemies and narrates the rich history of his world and comments on it. One of his famous quotes is: “There are few wars between good and evil; most are between one good and another good.”

Besides the two main heroes, the story is full of vivid characters and intricate politics. All types of characters, from high nobility, admirals and politicians, to common soldiers and farmers, are interwoven into the story. The story frequently switches away from the main heroes to the Unknown Soldier fighting for his life on the battlefield.

There is a third neutral power nominally attached to the Galactic Empire called the Phezzan Dominion, a planet-state (city-state on a galactic scale) which trades with both warring powers. There is also a Terraism cult, which claims that humans should go back to Earth, gaining popularity throughout the galaxy. Throughout the story executive political figures of Phezzan in concert with the upper-hierarchy of the Terraism cult orchestrate a number of conspiracies to shift the tide of the galactic war so that it may favor their objectives.

These are recommendation lists which contains Legend of Galactic Heroes. You should give them a visit if you're looking for similar novels to read. Alternatively, you can also create your own list.
More Lists >>>

Review after watching the anime adaptation, which I was told quite faithful to the books. If I can only recommend one novel for people to read, it would be Romance of the Three Kingdoms. If I can only recommend one anime for newcomers to watch, it would be Legend of Galactic Heroes. This is an epic tale of two men with a supporting cast of dozens crossing paths over and over again in far flung future where mankind has colonized the galaxy, split between two factions. The Galactic Empire is a decadent,... more>> decaying force, corrupted from within. Opposing it is the Free Planets Alliance, a network of like-minded planets driven by the democratic ideals of its founder who escaped from the empire long ago, now bogged down by selfish bureaucrats. As the show says, “The Empire which is run by bad men, and the Alliance which is badly run”. When the story opened, the two factions have been fighting each other for hundreds of years. Millions of lives spent as fleets of tens of thousands ships lined up in formation and blasted away at each other, the wasteful death and destruction punctuated by a genius or two on either side over the course of history who tipped the scales slightly one way or the other, never to find ultimate victory for their faction. There are two main characters in the series, both can be great character studies. Yang Wen-li is the reluctant hero of the FPA, a person who only joined the military to pave the way for his scholarly interests. His counterpart is Reinhard von Lohengramm, a genius driven to join the Empire’s forces to gain recognition and allow him to take revenge on the old emperor who had taken his beloved sister as concubine. Along the way, both men would rise in their respective faction, offending the established nobles and politicians who are irritated at these heroes. There is even a third player in the galactic stage, the fanatical remnants from Earth who decried the lack of importance the galaxy has placed on their original homeworld. Thus they had to resort to sabotage, political machinations and assassinations to keep the two major players fighting each other. What you’re going to encounter in this series are tactical fleet battles, involving anywhere from a dozen ships to tens of thousands, moving in formation in the vastness of space, maneuvering to take advantage of flanking and surprise attacks. You have read legions of men doing the same thing in Romance of the Three Kingdoms, now you can read something similar set in space. Instead of horses, you have spaceships. Instead of arrows or musket fire, you have laser beams. Instead of artillery, you have planetoid-sized beam cannons. Instead of valiant knights charging at the front, you have brave ship captains and admirals seizing opportunities to distinguish themselves. There will be politics, history, strategies. People discussing the ideals and philosophy, debating the pros and cons against each other, taking advantage of the huge cast and the many different opinions each of them have. Long before Games of Thrones, Legend of Galactic Heroes have always been the worthy successor of the shadowly politics and grand strategy that I have read about in “Romance of the Three Kingdoms”, or the Japanese equivalent set in the Sengoku Jidai, “Taiko”. It is easy to read about important characters dying, it is a current trend now for authors to kill off their characters. But it’s not easy to care about how characters lived, and for me LoGH will forever be an example of a great story who is able to do it. <<less
21 Likes · Like Permalink | Report

Reinhard von Lohengramm and Yang Wenli - two unforgettable characters on opposite ends of the battlefield. If given choice between a benevolent dictatorship or a corrupt, inefficient democracy: which is preferable? Legend of the Galactic Heroes shines in that it doesn't attempt to force an answer upon the reader. There is no black or white in this novel; neither faction is painted as 'good' or 'evil'. Characters in both the Galactic Empire and Free Planets Alliance are well-developed, their motivations explored, their actions realistic. About Reinhard & Kircheis: ... more>>
Spoiler

Many deaths occur in LOTGH, but the one which stood out most to me was not Yang Wenli's, not Reinhard's, but Kircheis. Kircheis's death occurred so early in the novel that it completely blindsided me. I think that was when I first began to realise that this was a novel with no holds barred: the author will not attempt to contrive a happy ending if it did not go with the flow of the story.

But beyond that, Kircheis death was the first turning point in Reinhard's life. He left behind a gap that never truly went away. The contrast between Reinhard and Yang Wenli is stark in the depiction of their personal lives. Yang Wenli is constantly surrounded by people he loves, and who loves him - his friends, family and wife. Whereas with Reinhard, we get the picture of a man standing at the very top - so powerful, in complete command over the Galactic Empire, but so alone.

The death of Kircheis was not simply the death of Reinhard's only friend. It was really the beginning of Reinhard's solitude in his entire journey to conquer the known galaxy. With Kircheis's death, Annerose left. Yes, Reinhard has many capable subordinates - Reuenthal, Mittermeyer, Bittenfield - but it is very different from the warm camaraderie enjoyed between Yang Wenli and Cazellnu, Attenborough, etc. I think perhaps this is why I am more sympathetic towards Reinhard. If even I, as the reader, deserts him, then he will truly be alone in this journey.