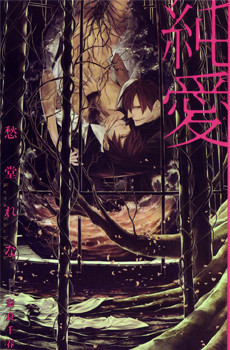 One entry per line
Shuhdoh Rena

One entry per line
Nara Chiharu

Status in Country of Origin. One entry per line
1 Volumes (Complete)

One entry per line
Libre

On his way to work, Shimizu, a systems engineer, faints at a train station because of his strenuous job. As everyone pretends not to see him, the only person to call out to him is his elementary school classmate, Suzuki. But when Shimizu wakes up for the second time, he discovers that he has been imprisoned in a strange place and has been undressed and violated by Suzuki, who he expected to be humane!

“Looks like you get more excited when you’re tortured.”

Inside this cell, day by day he drowns in sex…his nipples and as*hole are toyed with; his body – molded into something corrupt. Shame turning to pleasure.

One entry per line
純愛

These are recommendation lists which contains Junai. You should give them a visit if you're looking for similar novels to read. Alternatively, you can also create your own list.
More Lists >>>


Write a Review
9 Reviews sorted by

A somewhat mystery/ supernatural-like novel which change into psychological genre. When I started reading this novel, I really think Suzuki is a vampire/demon. There’s this supernatural vibe in this novel, especially with that cover. So I expect the plot to take magic development to explain what happened to the protagonist. Turns out I was wrong. As for the story, I believe ‘Stockholm syndrome’ and ‘brainwashing’ tag is already a dead giveaway. The mystery about Suzuki identity is nicely done, and I really like the art. The story is rather standard. Smutty, but... more>> otherwise standard. <<less
5 Likes · Like Permalink | Report

Ok, so. I just skimmed the whole thing so I don't think I can say much, but I did get the general gist of it. It was pretty ok. The translation was stellar, and they even formatted the whole thing to be downloaded as a PDF complete with illustrations. Shimizu... did he purposely lack a backbone? He's so easily swayed by "beauty" it kind of turns dumb onwards? Like, what if "Suzuki" ain't hot? Is he going to emphasize on some other trait or...? And Shirai, my man, he deserves much... more>> better. I'd marry him if I were a guy, honestly. What does he even see in Shimizu? I get that he may fancy him on some level, but this kind of dedication? Woah, just how hard did he fall for this chicken. I'm wholeheartedly berating Shimizu here, but I'd like to notice our token stalker-kun, Suzuki. Kudos to him for having a mind-f*ck level of hypnosis. You do you, girl. Summary: Translation - 1 2 3 4 5 Plot - 1 2 3 4 5 Characters - 1 2 3 4 5 Enjoyment - 1 2 3 4 5 <<less
3 Likes · Like Permalink | Report

I like this story. Like a lot. The plot was just so awesome. To me, I like stories with Stockholm syndrome and I like how it was applied here. I love Suzuki's character, he may be manipulative (the fact that Shimizu was still doubting him at the end but then still gave in) but still I love him. It was nicely done. Great writing. Good translation. Everything is good. Love it!
2 Likes · Like Permalink | Report

The story is amazing and I love it so much! The translators did such an amazing job and they even included pictures in the pdf file. The author managed to give the characters depth despite it being short. You'll get to know the MC's personality and see how "weak-minded" he is. Maybe that's how he got brainwashed so easily...
2 Likes · Like Permalink | Report

I am disappointed with the story a little, the smutty part is okay but the plot is pretty standard I wanna see some relationship between Shimizu and Suzuki (more than just sex). Also I don't like the protagonist that lost and depress. It's doesn't suit my test.
2 Likes · Like Permalink | Report

personally... I love this story...I love the element of unexpected twist and turn. The possessive love that know no bound. I feel sorry for the supporting male lead but I know he find someone who deserves his love. As for the protagonist and ML. I like them. There's so much thrill during their moment of separation I feel like they would be part forever. I love the element of unexpected twist and turn.😍 This is fresh and new for me. Unlike those cliche story... ☺️ It's fun to read...
1 Likes · Like Permalink | Report

The lack of link between both of them has been highlighted by them not being in an actual relationship yet the victim acknowledging the existence of the relationship. It was pretty effective - after all, the only thing that made him feel anything was those times at the beginning. The genuine him is the doubts put throughout (especially towards the end), and while he is probably no longer hypnotized, the brainwashing was successful - pushing aside his doubts, with no reason, he simply desired this man. This is also symbolized by him not knowing his real name until the end, and so he finally falls into the darkness willingly, knowing that only in it can he seek comfort.

[collapse]
While the "fall into the darkness" theme has been around, it's both beautiful and dangerous at the same time... and can be twisted and tragic as well. While one sometimes can't understand how their minds work, it seems to make so much sense to them, and reading their perspective makes one susceptible to whatever darkness they have... like a magnet. Well, of course in the end they're fictional, so I can still extricate myself... I don't want to dare imagine it in real life, though.
1 Likes · Like Permalink | Report

Hmm... intriguing idea, but I was a bit bored with the story and characters here. I would've liked more eerie vibes, highlighting suspense by constantly tricking the reader into questioning whether it was his dream or reality, whether he was willing or was still hypnotised. In the end though, it just seemed like a dude whose psyche is shaken by the r*pe and falls in lust with his kidnapper.
0 Likes · Like Permalink | Report

Rating: 2 - 2.5 / 5 To be honest, I don't know what to think. In the end, we don't know if what the protagonist is feeling is real or forged by Suzuki, or what he had experienced is real or not. Although the protagonist "loves" (we don't really know) Suzuki, Suzuki raped him. It's clearly a stockholm syndrom case that's why I don't know what to feel; but I admit the plot was something I have never seen before.
0 Likes · Like Permalink | Report
Leave a Review (Guidelines)
You must be logged in to rate and post a review. Register an account to get started.