Novel Updates
RegisterLogin
Theme
Search
Your changes has been saved.
Advertisements
Hagakure Sakura Does Not Lament 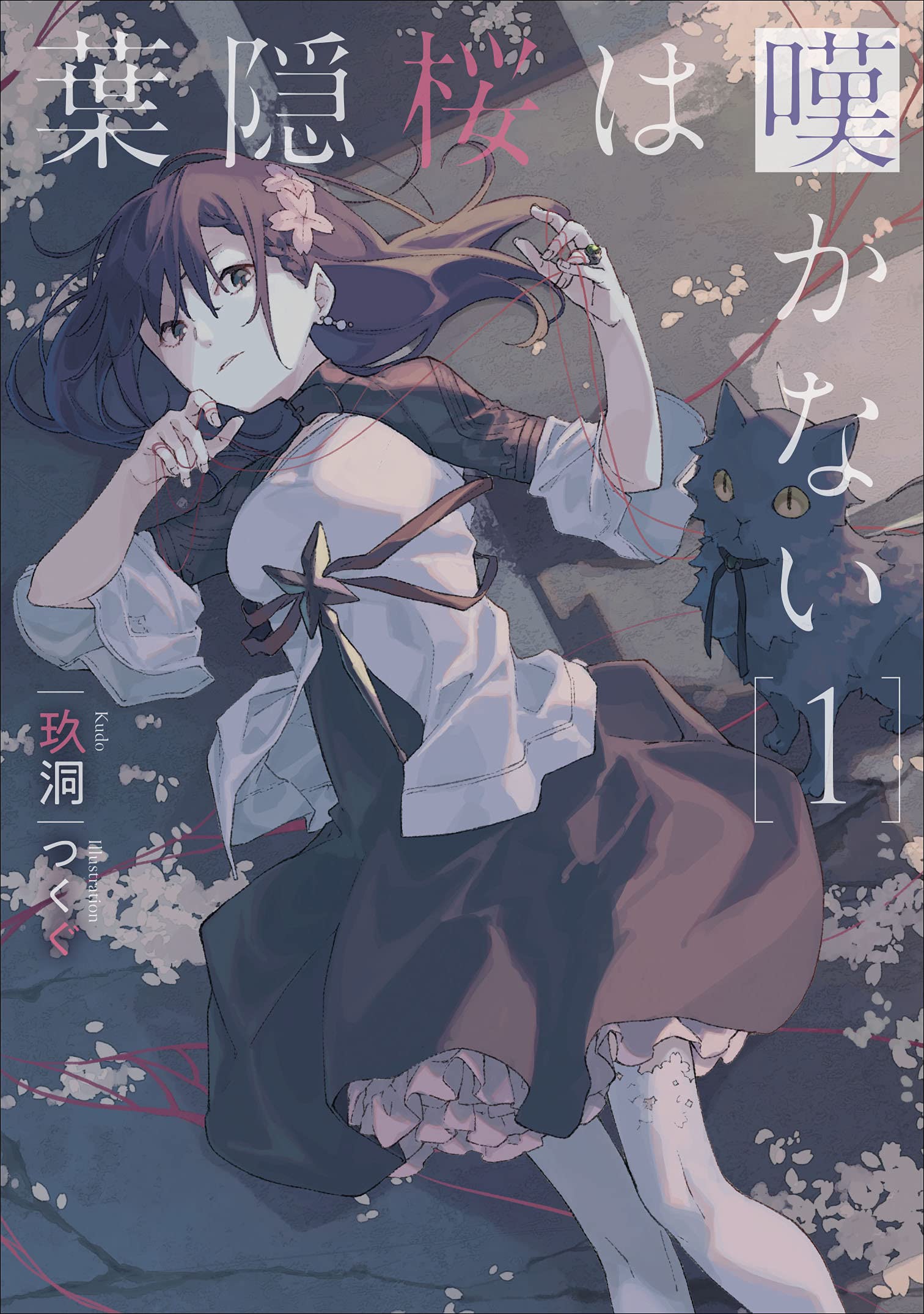 Status in Country of Origin. One entry per line
WN 164 (Ongoing)
LN 1 (Ongoing)

The world changed the day that cracks appeared in the sky– suddenly monsters named『Demonic Beasts』appeared and began to rampage, attacking people.

–but when there is light, there is also darkness.

In the corner of an alleyway, a boy who had been attacked by a demonic beast was dying. His voice begging for help did not reach anyone and his body refused to move.

Looking into the boy’s face, a black cat began to speak to him.

The boy nodded firmly to the devilishly sweet invitation, in response the black cat mocked him.

—on that day, a『Magical Girl』was born in a place that no-one knew.

『She』never laments, no matter what the future may bring.

These are recommendation lists which contains Hagakure Sakura Does Not Lament. You should give them a visit if you're looking for similar novels to read. Alternatively, you can also create your own list.
More Lists >>>

I gg translated this till chapter 105. Missing out on a lot of info, but I still find the novel interesting nonetheless. To be honest, I don't like the magical girl theme in any of my reading novels, but this novel sculpts another side of that kind of shine and sunny theme and keeps me hooked. For the detail, I will list some aspects of this story over 105 chapters, enjoyable or not, please decide before digging in:
19 Likes · Like Permalink | Report

I don't know whether the TL is still doing translation or not since there have not been any updates since February 2021. It would be a shame if the TL for some reason stopped doing translations because from what I've read so far the quality of the translation is decent. There's not much to say about the story as of chapter 7, but I think the premise is interesting enough for me to put this on my reading list. For now, I might try reading this through MTL, for there's over... more>> 100 raw chapters to read. I sincerely hope the TL doesn't abandon translating this WN. I will check this page once a month to see if there's any updates available. <<less
8 Likes · Like Permalink | Report

Good story, good writing, good translation. Author avoids the common pitfall of genderswap stories by keeping the MC under constant stress. It's not unbelievable that he doesn't abuse his female form because he's constantly juggling school and fighting and protecting his family. The characters generally act like people and do things that make sense. The action scenes are well thought out and described. Uploader does not always update Novelupdates, at time of writing recent chapter was 84 in NU but on the translator's website he had up to 93 finished
5 Likes · Like Permalink | Report

First of all I do not agree that under the circumstances Japan or any country will be isolated, reason first the scientific curiosity in the current age, is way way bigger than religious beliefs, mosters appearing out of nowhere than vanishing, a big crack, scientist all over the world would go crazy to figure that out (normal people would want to figure out how as well), these things are literally unprecedented and breaking the laws as we know it, second is the threat the situation poses, since japan was... more>> invaded out of nowhere, and no one knows how the first common sense is to figure out how, cause no other country knows if they can be next, so best figure things out while some one else's house is being wrecked, so if anything I think japan would flooded with different countries teams, ofcourse some country might ban their normal civillian from travelling their, isolated dimoly not logical, that was just my thoughts on the basis of the novel, otherwise novel is great so far. <<less
4 Likes · Like Permalink | Report

Hagakure Sakura wa Nagekanai is a story about Tsugumi Nanase and his magical girl persona Hagakure Sakura. Like the synopsis said, Tsugumi involved on stray boundary accident. A rare case where person get dragged into special space where magical girl and demonic beast having a death match. Got hit by stray attack from demonic beast and heavily injured. Long story short he accept the contract with God to save himself and now he need to fight demonic beast as magical girl to fulfill the contract. Tsugumi himself described as ordinary guy. If... more>> theres anything special, its his tolerance. He accepted everything as long it isnt harmful to him and his sister, Chidori. Hence he could befriend Yukitaka, who hated by everyone for various reason. The plot so far is about Nanase Tsugumi growth and unraveling the truth about the big fire accident that resulted on the siblings losing all their memories aside from their name. About Tsugumi past
Spoiler

He was raised by his sister, Shirakabe Sakura, as vessel to contain Evil God. Thats why he is tolerance towards evil (Baal, his contract God. Lucifer, or known as Shirakabe Sakura. Satan, known as Yukitaka). During Advent of God ceremony, Lucifer that grow attached to Tsugumi find out Tsugumi self would be eaten by the Evil God that was called. Refusing that to happen, she failing the ceremony, resulted on big fire accident and assimilate her soul with Tsugumi to protect his ego, hence his memory sealed and his magical girl form looks like Shirakabe Sakura. For Chidori, she is substitute vessel that was kidnapped and assigned a role as Tsugumi's sister. Her memory is sealed by Yatagarasu in consideration of her mother contribution as the first magical girl, Sakura Akane.

[collapse]
There might be some mistake because im reading raw mtl. Although theres a lot of girl that has interaction with MC. There is no harem or even romance so far. Theres only familial love between him and Chidori. And other girl remain as friends. For fellow magical girl, he treat them as comrade and respect them, considering himself as someone new in this dangerous occupation. Enough with summary. My rating might be biased because: <<less
4 Likes · Like Permalink | Report

Translation: Travis Translations. Feels like an MTL, there are a couple sections that are clearly unedited or wrongly translated, and combat scenes can be disorienting to read through. Hagakure Sakura Does Not Lament so far explores similar topics to Madoka Magica, with Magical Girls that make contracts with otherworldly beings in order to fight monsters. Yes, Magical Girls die fighting monsters. But in every other aspect it's uncomparable with Madoka Magica. While it's admittedly early to have a deep opinion on the novel, there are no signs of interesting characterization or... more>> intriguing conflicts to explore. Plotwise, it does set up a couple of mysteries that add some depth to the story but there are a few red flags that make me apprehensive:
Spoiler

Gluttony skill: I've read too many poorly written novels where the main character becomes too powerful because of some sort of Gluttony skill that powers them up. It would be nice if this novel had some drawbacks or some kind of dark side associated with the skill. There are a couple clues that there is a deeper connection, but I don't have high hopes.

No established goal: Or rather, I should say the main character accepts the situation way too easily and is being carried by the narrative. He doesn't have a real goal or something he aims to achieve as a Magical Girl, he simply follows the whims of his contractor.

Foreign countries are bad: During the introduction chapters, the novel mentions that every foreign country cuts off connections with Japan when the catastrophe happens. This immediately signals to me that 1: foreign countries are going to be antagonists later on in the story, and these kinds of stories are generally biased and gross to read; or 2: the author has no interest in politics and doesn't have the ability to write something interesting here, because this is entirely unrealistic.

Hints of harem: His "twin sister" likes him. His teacher likes him. His senpai likes him. Maybe I'm reading too deep into it, since I suspect the novel won't go down the harem route completely due to the slight gender identity problem with the whole Magical Girl thing.

[collapse]
Overall, Hagakure Sakura Does Not Lament does create a somewhat interesting premise with something similar to Madoka Magica, but the way the novel is developing so far feels like it's going down the typical light novel fantasy route. Tentatively 2.5/5, but somewhat willing to keep up and see how it develops. <<less
3 Likes · Like Permalink | Report

This one is pretty good. It's magical girl story that explores some of the darker aspects of the magical girl genre such as the general public's reaction to the government needing to rely on adolescent girls risking their lives (and sometimes losing them) in order to protect them. As for the MC, there's a mystery around him and his sister, what happened in their past, and how that is affecting the present. The story is still in the early parts so I'm excited to see where it goes. New chapters... more>> go up fairly often and the TL is solid, which is always a plus in my book. <<less
1 Likes · Like Permalink | Report
Advertisements
Leave a Review (Guidelines)
You must be logged in to rate and post a review. Register an account to get started.