Novel Updates
RegisterLogin
Theme
Search
Your changes has been saved.
Advertisements
The Revenge of the Soul Eater

Home >
Novel >
The Revenge of the Soul Eater 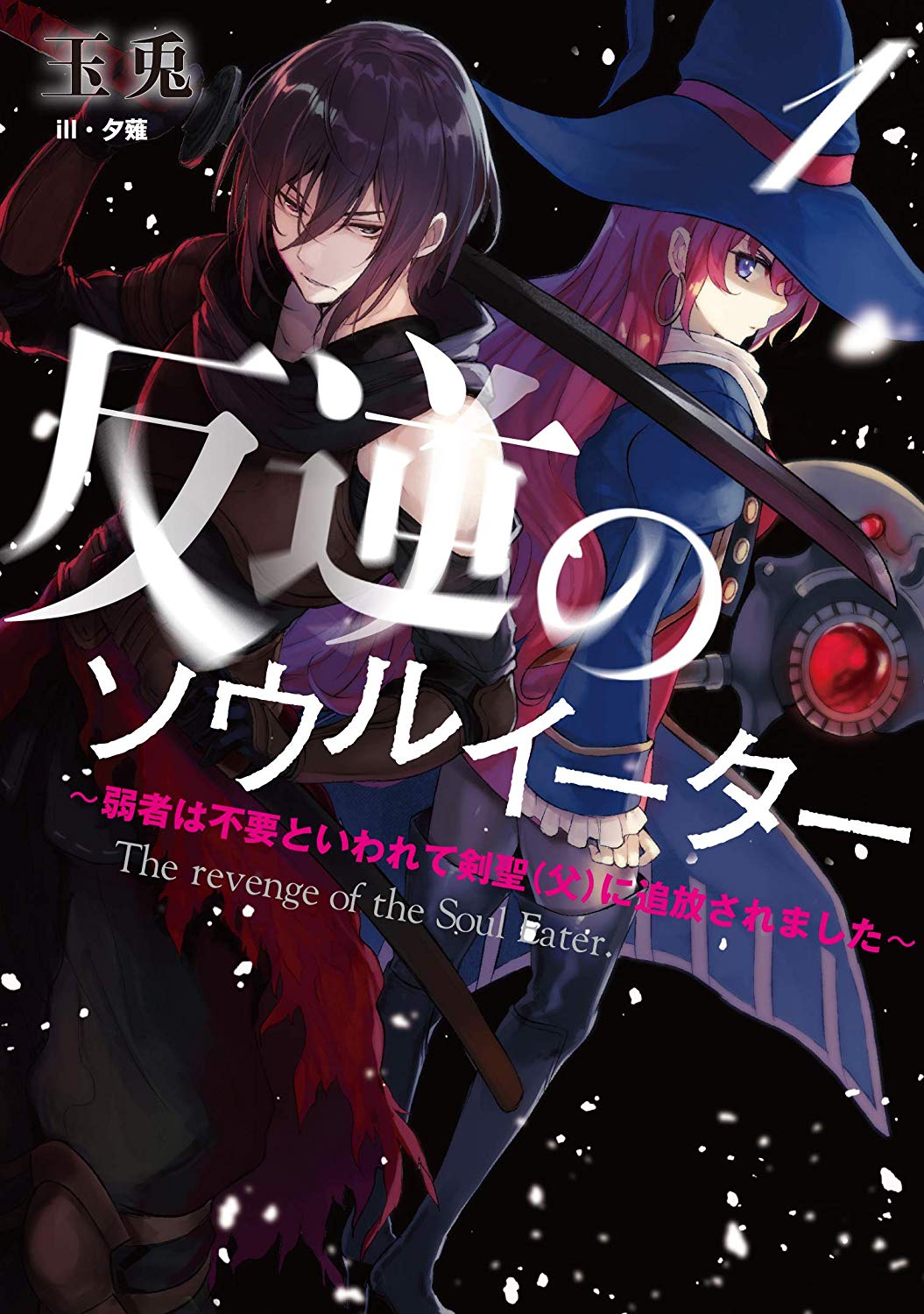 One entry per line
玉兎

The Mitsurugi household was given the important task of guarding the demon gate by the emperor.

Sora Mitsurugi, who was the heir of the family, was called on to take the trial ceremony at the age of thirteen.

The trial is something that he must overcome in order to learn the phantom blade style that was passed down the Mitsurugi household from generation to generation.

The other seven pupils of the same age who had taken the trial have all passed. And now only Sora remained.

His father, brother, fiancee, and a pair of siblings who have watched over him were all looking, as Sora’s trial ceremony solemnly began…

These are recommendation lists which contains The Revenge of the Soul Eater. You should give them a visit if you're looking for similar novels to read. Alternatively, you can also create your own list.
More Lists >>>

Wow this kind of revenge novel is really refreshing=￣ω￣=. The MC is not really edgy. He kind of tsundere tho. He has that kindness inside of him but can't realize or accept them. So far so good. MC is kinda manipulative. I hope the author give more dialogs for his harem but really the chapters are really short tho. Kinda tired of waiting for more chapters (｡•́︿•̀｡). Also wow this novel has the most tags in it
0 Likes · Like Permalink | Report

Dark and angry revenge story that's surprisingly well written. Worth reading. This review is based on google translated web novel chapters and I'll try and avoid spoilers here as seeing how everything works out / plays out is definitely part of the joy of reading this novel like most JP fiction, there's too much exposition and heavy handed side stories for my tastes where the author could have shown what he tells instead. Even so, the story is well crafted and much more entertaining than what might otherwise first seem like... more>> a revenge porn fantasy plot There's action, mystery, a certain degree of malicious revenge (at least somewhat deserved), and a decent amount of quality plot and plotting. The MC is not evil but he isn't good either. He's chaotic neutral, driven by his own motivations and whims. He's smart and crafty and selfish. I think the author tries to portray him as a genuinely good person driven somewhat insane by the horrors he experiences and the hopelessness he faces in the early story. The detailed elements of revenge porn / harem have been toned down in recent revisions to the novel so the author could avoid an 18 rating and I'm not sure if that's good or bad. The harem flows strong with this one and at chpt 57 seems likely to exceed 4 or 5 love interests / partners / s*aves / minions etc in the near term. <<less
12 Likes · Like Permalink | Report

The right kind of edgy 👌 Its a tr*sh food story, easy to consume, tasty because of its rough elements and objectively a middle-lower tier job but it has the perk I look for in tr*sh food stories: HONESTY The MC doesn't pretend he is a saint on a moral quest, his revenge is personal and that's the only justification he needs, so, he draws but one line and goes from there on his revenge The first chapters it looks like the MC's life sucks because he is talentless and gives a vibe... more>> as if the author is just pushing him down, which he is, but when is problem is explained he comes as a cripple and the people around him look like a**holes pushing him down because of it, a thing that happens in real life and can reasonably be increased in a world where might makes right Small spoiler
Spoiler

The MC is level 1 and has never been able to level up despite years of training and monster killing, which makes everyone think he is already at his limit cap
Yep, totally sucks

[collapse]
Then, we can see the MC trying to overcome his cripple status but failing because... well... HE IS A CRIPPLE in a world where power is everything and we can see and understand why people is willing to give preference to stronger people just because they are more necessary So, when the MC is pushed down we can understand why it happens and the stance of the other characters, which from most of them is a d*ck move in a small amount but mostly is just the ugly reality of the world they live in, and so far the MC's responses are reasonable to the damage they have inflicted on him
Spoiler

His old family dumped him because he was too weak to survive on their OP island that fends off the monsters, his ex-fiance advised him to give up on fighting and live as a regular person as not to get himself killed, and he just wants to be recognized by those people

Then there is another group who tried to kill him, then denied responsibility, then got away with it because of their status, those he wants to kill or humiliate as much as possible

This is the line he draws, for those who humiliated him or were mean to him he just is a d*ck in return but for those who tried to kill him he wants to kill

[collapse]
The edgynes is reasonable and upfront which eliminates the cringe other edgy stories tend to have and the moral line is clearly drawn and reasonable so there is no hypocrisy so far Entertaining, honest, simple fun, but I saw in the comments people complaining about how beaten down the MC was during the first 10 chapters so you are warned, personally I didn't mind it because the chapters are short so give it a try until chapter 11 if you are affected by an MC not being OP <<less
7 Likes · Like Permalink | Report

3.5~ stars; it's not perfect, but it's a lot better than I thought it would be. Especially when you consider how 'outstanding' JP novels usually are. Particularly revenge novels. The revenge plot is logical and isn't forced; MC doesn't change his character abruptly but still grows. Morality is properly painted in grey, so even antagonists have their understandable motives. The amount of cliche is just right. Though the novel isn't perfect. The author uses the wrong timing for his time-skips. The world setting feels like a generic combination of Western and Japanese... more>> culture. Also, the author decided to skip s*x scenes, thus shut himself in the leg because it has a negative impact on the revenge scenes. Pros/Cons in detail:
Spoiler

[collapse]
Feel like reading a revenge story? Try this one. Not edgy, not chuni, not childish, but a little bit shallow and maybe lacking in important places. <<less
4 Likes · Like Permalink | Report

Best revenge fantasy. So at last I will say it is to see that the path MC choose will... more>> make him invincible, his relations with people and his family members who disown him, who is right or wrong in the end and also to find his own happiness. P. S:- There might be slight change in Light Novel but it is fine. <<less
4 Likes · Like Permalink | Report

It's ok. For revenge story although many parts are questionable and frankly speaking it's easy to say how it could have been done better, it's still few levels above your average novel about revenge. I think what I like the most is that it's not isekai. MC didn't transmigrate, reincarnate whatever. Big plus. Characters are level headed and generally it reads well, although it's plot is rather generic. Also it was supposed to be a revenge novel but actually the worst thing MC ever does is kidnapping one tsundere and forcibly... more>> kissing her few times. Otherwise he is just yapping angrily, not really a revenge story but it's still somewhat cool I guess? You know the superpower is sorta smooth, the heroines are ok, satisfaction is also delivered. I have nothing against the setting, it is plain but for a webnovel it's ok. You can't set the bar too high right. Though it has strong wish-fulfillment vibes. Like, MC was pitiful tr*sh, then got this superpower and suddenly he a pimp lol. Even though he was supposed to be this antihero he is still acting like goodie two shoes I don't know. Somewhat feels like author started writing this while they were angry or something, then cooled off and tossed the character growth out of the window. Also, I read the raws and compared english translation and I must say that translator really did amazing job. Author seems pretty unskilled to put it lightly :) like, maybe it's because I don't have this japanese mindset, but some things in the raws are really incoherent and all over the place. Author also sometimes explains some things at the beginning of next chapter for readers that he wasnt' able to write properly in the previous...I don't know, reading the raw gave me headache. Giving it high rating due to respect for translator. <<less
3 Likes · Like Permalink | Report

Sometimes I find myself confused at the pacing. But the scheming is interesting and things don't get dragged out very long. The progress of the story is satisfying and clear. But enough is left vague to keep you thinking abou what exactly is going on. A few plot points are left hanging or patched poorly, which is why I give it only 4/5. It can be an awkward read occasionally. The translation is excellent though.
1 Likes · Like Permalink | Report

The kind of ero power I like. Arifureta is a good recommendation for this. Compared to that, this is a bit less fluffy and a little bit more edgy (but not too much of the juvenile kind) ; plus there's R18 relationships with harem members. If you read the tags for this story, you can get a pretty good idea of what it's about.
1 Likes · Like Permalink | Report

Very good, dark realistic fantasy world. So MC is like a dragon needs more exp point to level up so he get bullied because he's stuck at level for years. Need more chapters and fan service still unsure that MC bang anyone yet.
0 Likes · Like Permalink | Report
Leave a Review (Guidelines)
You must be logged in to rate and post a review. Register an account to get started.

A Story from the Other Universe...