Novel Updates
RegisterLogin
Theme
Search
Your changes has been saved.
Advertisements
Recently, My Sister is Unusual 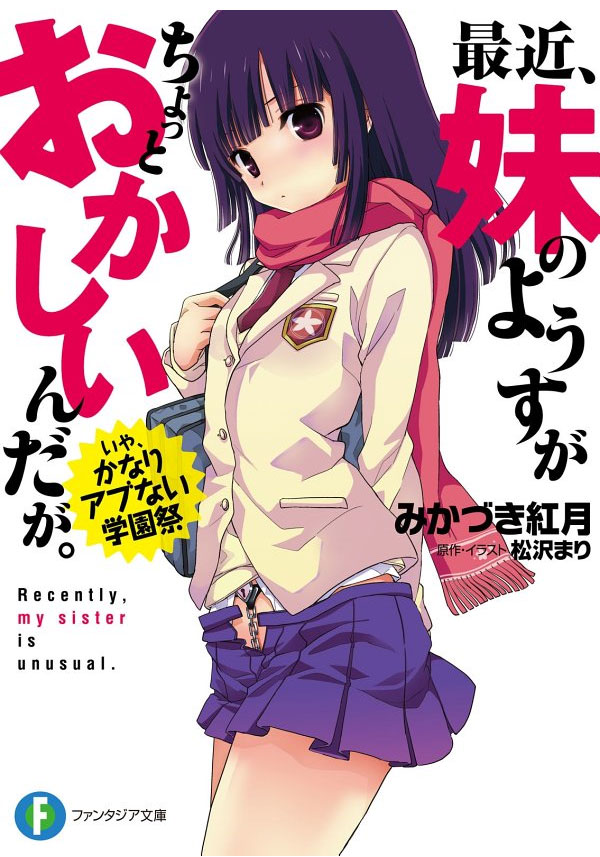 High school girl, Kanzaki Mitsuki, just got a new older brother when her mother remarries a fellow divorcée with a son. Soon after, her new step dad gets transferred overseas and her mother follows him there, leaving Mitsuki alone with her new step brother, Yuuya. Feeling abandoned by her mother, she stays distant from Yuuya, never really getting along very well with him nor even keeping a conversation with him.

However, one day, Mitsuki gets visited by an angel/ghost named Hiyori who takes over her body and tries to make sexual advancements towards Yuuya. Hiyori is the lost spirit of a girl who died but can’t reach the gates of heaven and reach eternal peace. To reach heaven, Hiyori puts a belt on Mitsuki called the TST that fills up every time Mitsuki feels sexual feelings from Yuuya, whether it be from going on a date, kissing or even sex. For every time it fills up, Hiyori gains a step on a bridge that connects her current situation and the literal gates of heaven. If she wants to get rid of the annoying Hiyori, Mitsuki has to make some bold and sexy moves against her own brother, even if he is just a step brother.

This side-story shows the events happening during a certain school festival.

These are recommendation lists which contains Recently, My Sister is Unusual. You should give them a visit if you're looking for similar novels to read. Alternatively, you can also create your own list.
N/A

Reincarnated As A Crystal Beast

What Do You Mean All Dungeons...
Advertisements