Novel Updates
RegisterLogin
Theme
Search
Your changes has been saved.
My Sweet Heart 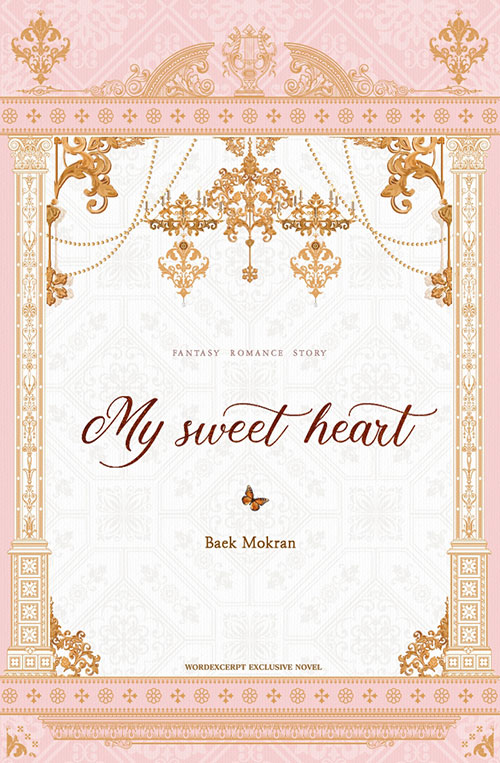 Status in Country of Origin. One entry per line
2 Volumes (Complete)

Isabel, who had been secretly following Agares, was now unknowingly one step closer to him.

“Who are you? The goddess of the beautiful night?”

“You’re the one hiding in a man’s room.”

The miraculous night she spent laying with him passed, and she had thought that he would never remember her, but…

“What—what are you talking about?”

These are recommendation lists which contains My Sweet Heart. You should give them a visit if you're looking for similar novels to read. Alternatively, you can also create your own list.
More Lists >>>

A bit odd. Our protagonist is a nondescript aristocratic young woman. So far, she has few to no distinctive characteristics, and is so unmemorable, she fades into the columns at balls. She's also a friggin' stalker. Like, a legit, creepy stalker. Her target of obsession is the immensely wealthy and powerful younger brother of the Emperor, an insanely attractive and charming playboy of an archduke who has had hundreds of women. Our stalker stalks him right into his private bedroom after he gets roofied, where the drugged out of his... more>> mind ML takes 'advantage' of our very eager to be chosen at last FL, who is well aware he is drugged. Apparently, our charming manwho*e has never, despite seducing countless unmarried young noble ladies, slept with a virgin. I have not gotten to the bit where they re-find themselves and he decides she's The One/ they wind up together, so I can't tell you how authentic that part feels. I am sincerely hoping there's going to be more to it than her being a virgin, but we'll see. It could be interesting, basically pairing the most-popular jock in school with the class weirdo, or it could be terrible. <<less
17 Likes · Like Permalink | Report

Edit: after finishing the novel I stand by my previous review as the storytelling did not improve later on in the book. It's definitely not a memorable story, the drama is somehow both short-lived and unnecessarily stretched out, which should not be words used to simultaneously describe the same thing, but here we are. ... more>> The ending (a HEA) is sufficiently cute though, so there's that. OLD: I've spent money on this and if you asked me whether it was worth it, I wouldn't be able to answer. The protagonist is pitiful and surprisingly innocent (
Spoiler

in spite of her being a literal stalker, who kind of "allowed" the roofied up ML to take advantage of her...I deducted 2 stars for that particular set up

[collapse]
), reckless and... forgettable... and... not clever, and lastly, she's very unlucky... like seriously unlucky, and her not being very bright is not helping her out in the management of her catastrophic bad luck. Ultimately, she's not a very memorable character. Which is a pity, because there's potential there, traumas and burdens to overcome. I'm not holding out hope though. Ironic though it may seem, the ML is even more forgettable. Besides the fact that the story is mostly being told through the eyes of the FL (whom we have established is not particularly gifted in the intelligence department, so we don't really get anything beyond basically "OMG, he's so hot!" - insert frantic fanning here -), the times we do get a glimpse into his thought process, by reading the story from his pov, his insight into his reasoning is nearly as vapid as the the FL.
Spoiler

For example, after the questionable affair, mentioned earlier, he starts looking for our FL with the brilliant idea of: suddenly going to every social event ever and only picking up women who vaguely remind him of her, then kissing them to see if they taste the same, then ditching them on the spot when the answer is no.

Brilliant, truly, a strategic genius, I must say.

Why does he do it? He has no idea.

He can't even remember her face! But he's freaking obsessed with finding her. Right.

[collapse]
At this point I'm more invested into watching how the antagonist characters of the story get screwed over, rather than the relationship of the leads.
Spoiler

I already know he's going to swoop in and save her useless ass in the nick of time.

[collapse]
It's not bad, it's entertaining enough, just... don't expect much. <<less
15 Likes · Like Permalink | Report

It’s a perfectly decent Cinderella story if you want to pass the time. But the FL has no personality. No likes, no dislikes, no opinions, no experiences, no interests. She barely says anything to ML. In real life she would be cast aside after being an easy lay. All ML seems to like about FL is s*x and her eating cutely. I am not convinced that this love would happen realistically. But whatever.
5 Likes · Like Permalink | Report

I honestly enjoyed the starting and how it ends.. but generally, I dont think 1200+ (book 1 and 2 combined) pages is worthy for the substance. And just like @Aurantix said, the drama was unnecessarily stretched. Nothing to boast about quality of writing as well or anything to make you feel goosebumps (isntead regret not having meds on hand upon reading this on my end). What I can say appealing or selling point of this book, despite the plot being common is the young innocent love of the some obsessive female... more>> lead which I can basically find in some other novels btw that has greater writing quality. Tho the story could be potentialy very appealing, the writing and flow has made the whole thing goes downhill for me.
Spoiler

HONESTLY TORN BETWEEN DROPPING OR CONTINUING (bcs I paid already and its a lil pricey) !!!!

1. MALE LEAD - very bland and useless character. Has so much angst and hes suppose to be power in society, second to emperor, at beginning but goes downhill as story progess. Allot of novel I read has same character build up, Duke and his greatness, and yet he is the MOST incapable i've seen throughout so far. and the adjective does not end there! I had headache!

And oh God, again, the drama was streched so long and in annoying manner that it actually offset the excitement and fun I had in first few chaps. Bruh, its very common to male lead of his trope that they cannot identify love but this one? btch. and for petes sake, might as well exchange your chair as duke with you butler or Xian the stpid if you are just going to follow his shts anyway. What did they do????!! Isabelle wasn't able to get to thier promised place, not once but foookiing so mamy times and each time the duke want to barage the barons house (fls, to save on inquire about the woman) in worry, the annoying butler would interfere "Yo maJEstY, you cannot bcs you are blah blah blah and sht. people wil go blah blah and I cannot save you from it!" WHATTT??? and what the dmbbb duke would do?? hes like "yes you are right! I shall hede yo will" and then the female lead will go home punished with whip abused and mistreated anddd (gaahhh, im out of my mind) but he the grEaT duke can barage the emperor at his palace in midnight bcs he is embarassedd, wtffff????? and whats worst? this sht drama and sht goes on and on, happened multiple times (its torture reading the pages, uhhh myghad for the FL) that I had to skip ezpecialy that dumb butlers worthless pages.

2. FEMALE LEAD - to be honest creepyin real life but it was fun reading the quirk. BUT... the same error or shuld I say female tropee classification, THERE IS DIFFERENCE BETWEEN INNOCENCE/NAIVITY AND s*upidY!! for fckk sake. I understand you want the female lead to be innocent and pure as much as you want the syory goes but theres limit to stvpidity!!! Oh god! I was enjoying the ride, pure innocent and quirk when he follows him around and he finally noticed her but when things go deeper, I realized she is just dmbbb. my lady, YOU WONT CONFESS BCS YOU THINK LOW OF YOURSELF? THEN WHY THE HELL YOU WENT DEEPER INTO THAT MESS IN THE FIRST PLACE. YOU WANT TO RUN AWAY BCS HE WONT ACCEPT THE CHILD AND YOU ARE AFRAID?? THEN WHY YOU SAYING HE IS THE MOST KIND PERSON AND SHT ON THE OTHER HAND??!

And for the male lead, he doesnt identify love, HE WONT CONFESS BCS "she dont love you" and yet you see every contrast in everything. doing nothing, not even questioning why each time you ask her to go here and there, she cannot made it through, nor why the suppose to be aristocrat woman eating like a starved woman??? why each time the family of hers cannot attend social invitations as one but Isabelle always at nook of every corner? nah HE is "wait, thats weird but anyways" that the amount of hint for him was too much and yet he do not have idea! BUT WAIT, THE FL WAS KIDNAPPED bcs of him and yet what he have done to prevent this? post his man and when she said shes ok, the men amd him was like "ok, cool! bye!" and SHE, continues with her acts just bcs of her negativity (partly understandable) but decision are always in contrast to her sht! USELESS ML AND DUMB FL! and for how long I was torturing myself for this petty repetitive drama? nothing wild happening just them not doing any progress just doing s3x with each other?? saying they only want each others body? the crying ML bcs he cannot make her fall in love and yet dont wanna marry but questions why she said she only want his body? 1260 pages! YES!! YOU SEE THE TORTURE???