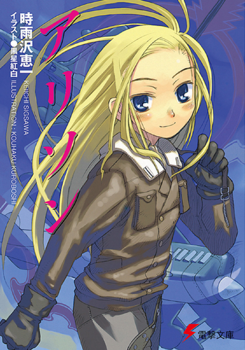 Allison is an adventure series set in a world containing one continent (extending roughly from the Equator to 60 degrees North latitude) which is divided down the center by a towering mountain range and a huge river. The industry and technology of the world are roughly equivalent to Europe in the 1930s. Due to the geography, two cultures developed on either side of the divide, and at the time the story begins, the cultures have been at war on and off for hundreds of years. The bloodiest conflict yet began thirty-five years before the start of the story; both sides are so exhausted by the conflict that an uneasy armistice is signed after some five years of fighting. Aside from a brief conflict over the jurisdiction of the river, resulting in the formation of a buffer zone on either side, this peace has largely been unbroken. The east side of the world is known as Roxche, though formally the region’s name is the Roxcheanuk Confederation. The entire region comprises sixteen countries which all speak a common language. The west side is known as Sou Beil, though formally the region’s name is the Allied Kingdoms of Bezel Iltoa. The region comprises the two kingdoms of Bezel and Iltoa which both serve to bring together a small number of countries under a common language different than that of the eastern region. There are far more blond-haired people in the West than the East.

At the beginning of the first novel, Allison, a pilot in the Roxche Air Force, has come to visit her childhood friend Wilhelm (“Wil” for short), who has remained at school over his summer break to continue his studies. While traveling in the countryside near the school, the two encounter an old man well-known to Wil’s schoolmates as a teller of tall tales. Nevertheless, he captures their interest with his talk about a “treasure” which, if found, is said to be able to put an end to the war. No one would believe him that the war between the countries could ever end, so no one listened to him. When the old man is abducted and taken over to Sou Beil, Allison and Wil steal an airplane and chase the abductors across the river into the next region. Fortunately, the two were raised as orphans by a woman who came from the West, and thus can speak both languages.

These are recommendation lists which contains Allison. You should give them a visit if you're looking for similar novels to read. Alternatively, you can also create your own list.
More Lists >>>

This is about the closest Japanese light novels can get to Indiana Jones - plane chases, government conspiracies, shootouts with kidnappers, and searching for hidden treasures. Except that the protagonists are a couple of 17-year-olds rather than grizzled archaeologists. Allison is the first of a series of action/adventure novels set in this world, which resembles a post-WWI era Europe. It follows an impulsive young female fighter pilot and her bookworm childhood friend (who also happens to be an engineering student and amateur sniper) as they try to track down a treasure... more>> that can end the cold war that is splitting the continent in half. Along the way, they fly into enemy territory, and deal with kidnappers, murderers and spies on both sides as they unveil a masssive conspiracy to hide what happened a long time ago. The translation quality is high, and the story is complete (though it kind of ends abruptly... but that's because there's a sequel series). <<less
10 Likes · Like Permalink | Report
Advertisements
Leave a Review (Guidelines)
You must be logged in to rate and post a review. Register an account to get started.

A Budding Scientist in a Fantasy...
Advertisements