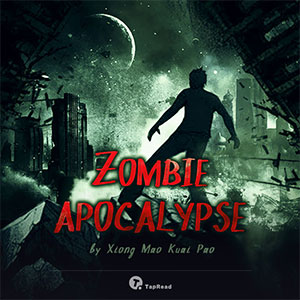 The outbreak of an unknown virus infection has turned the city of Hanghai into a living hell. The people infected have turned into scary zombies. Three months ago, Qin An’s wife divorced him and told him that the virus was about to spread and that Hanghai city was about to become a quarantine area, leaving him with a pile of supplies. Three months later, he has slowly healed his wounds from the divorce, and now he’s thinking about how to live.

One entry per line
末世危城

These are recommendation lists which contains Zombie Apocalypse. You should give them a visit if you're looking for similar novels to read. Alternatively, you can also create your own list.
More Lists >>>

Mc's wife divorced him and hook up with other man.. For some reason she stores lot of food for MC to survive in zombie apocalpyse and leaves with tears.. He then hook up with neighbour's wife who lost her husband. They got power out of no where. Finds out his ex wife has been having affair on his back in all those years... Got betrayed by his friend and got trapped by a drug and then escapes, kills them and got trapped by a drug in another place. (Thats it I stopped... more>> it). If anyone continued this novel, could you please tell about his ex-wife story in the review. I'm little curious.. Oh don't touch this novel please it is advice from an expert <<less
3 Likes · Like Permalink | Report

This novel can be described as a mashup of post apocalyptic zombie virus outbreak (along with it's super powered virus enhanced humans) with ordinary people who have inherited special powers from "Sword Cultivators from beyond the galaxy". Sometimes you have people with both power sets. It's dark and steeped in pathos at times with lots of situations of humans eating humans due to limited food resources. The characters often feel very one dimensional or overly melodramatic in their behavior -oftentimes seemingly insane even before the zombie apocalypses. It's like they belong... more>> in some deranged soap opera or warped love story. The main character struggles with a lot of the usual moral greyness that's often seen in post apocalyptic stories but he seems to relapse frequently to not being able to make the hard decisions. Some of the plot is super contrived in that it feels like every other character that appears in the story is somehow related to the main character in some way despite the vast population and location distance. It also has mistaken/hidden identity plotlines that make the characters seem really s*upid for not figuring it out or at least asking the obvious questions. Despite all that I went up to chapter 700.
Spoiler

At that point it became more like Apocalypse Summoner with it's pop culture reference cameos (like a character turning into '83 LOCH GJ and firing off a XL18Z... and then Superman), hand of fate contrived plots (think Final Destination the movie kind of events) and general insane nonsensical powers (pulling tens of thousands of people at all power levels physically into a dream world) that made it difficult to suspend my disbelief.

[collapse]
I would rate this a 1 -similar to Apocalypse Summoner. It's a train wreck but sometimes you just can't look away. For reference I would give God and Devil World a 3.5 and Demon Hunter a 4 (although I found GDW a more fun read). There are no post apocalyptical web novels that a 5 for me. For web novels in general I would give Release that Witch and Gate (Thus the JSDF Fought There) solid 5s. I have a thing for science/fantasy mashups. <<less
2 Likes · Like Permalink | Report

Honestly the story was very good in the first chapters, but around 25 (I think) a woman (Li Na) appeared and I was suspicious that it would be a harem (There was no harem tag, I had to add, I just don't know if the tag will be recorded on the site.) , in fact I suspected before that (no woman would like her man to participate with another woman, but as incredible as the protagonist's wife accepts (I gave up, I lost part of my mood from there)). Worst of... more>> all, there is no need to prolong a story that you had no reason to prolong! When I think that the protagonist is going to have problems and grow as a human being, something miraculous happens, and only good people die in that shit! It was less than 100 chapters and I already wanted the protagonist to die! It is not worth reading. Especially if they don't like the harem, I run away from the harem as if I had to run for my life, it's very disgusting. Qin Xao Yan and Qin An were well together, in that house and that they didn't have to help anyone! Sorry for my bad English. <<less
2 Likes · Like Permalink | Report
Advertisements
Leave a Review (Guidelines)
You must be logged in to rate and post a review. Register an account to get started.

It doesn't matter if I am...
Advertisements