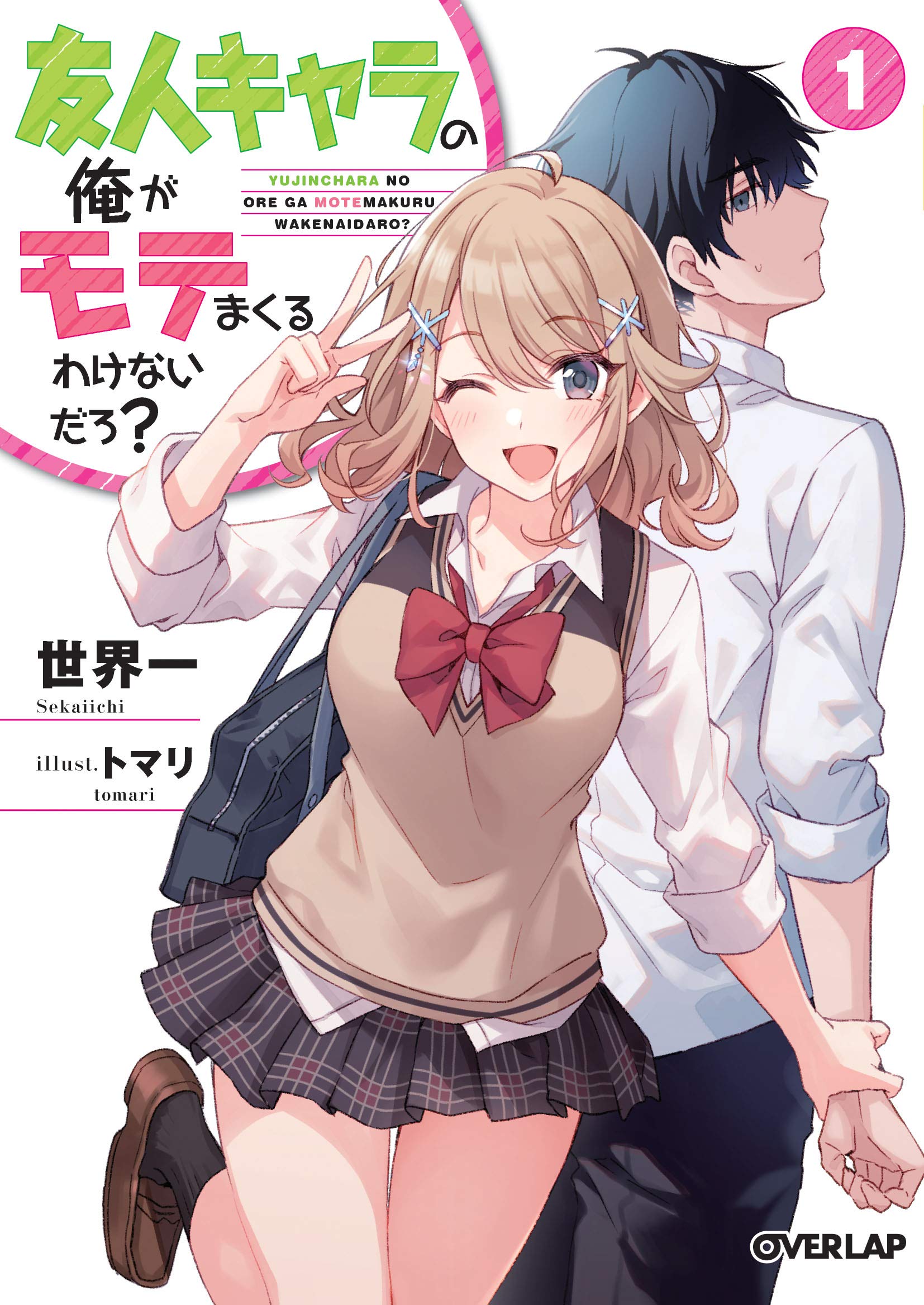 One entry per line
Sekaiichi
世界一

One entry per line
Tentai Books

“Cuz I looooove you, Senpai!”

I’m Tomoki Yuuki, a normal second-year student in high school. Perfectly normal, if not for the fact that everyone avoids me like the plague because I look like I’m out for blood. The only exception is the typical novel protagonist chad Ike Haruba. But one day, his sister Ike Touka confessed to me! This chick just met me yesterday, what’s she going on about?! In any case, I decided to be her fake boyfriend on account of my friendship with Haruba. But now even Haruba’s idol-tier childhood friend and a smoking hot teacher is getting involved with me?! Hold up, this ain’t a romcom wet dream! I mean, there’s no way a sidekick like me could be popular, right?

One entry per line
There’s No Way a Side Character Like Me Could be Popular, Right?
Yuujin Character no Ore ga Motemakuru Wake Nai Darou?
友人キャラの俺がモテまくるわけないだろ？
好友角色的我怎麼可能大受歡迎？

These are recommendation lists which contains Yuujin-chara no Ore ga Motemakuru Wakenaidarou?. You should give them a visit if you're looking for similar novels to read. Alternatively, you can also create your own list.
More Lists >>>

The ML is that best friend you always wanted. He is wholesome af; he doesn't get jealous of his Ikemen friend; he is the kindest but most misunderstood person. I love the story, and it's worth a read.
13 Likes · Like Permalink | Report

not really a fan of how the author started their relationship, he could've done better overall it's a good read for me, though the fluff factor isn't really there for me at this point (with their relationship being that and the drama caused by misunderstanding piercing my heart), so I'm little bit turned off sometimes the MC here is nice though, made me remember takeo gouda, especially with his friendship/bond with his friend ... more>>
Spoiler

the way they entered that relationship and the person the MC entered it with isn't really done well, and because of that I'm having the thought of how bad the fake lovers trope are, especially here

the way she said "You are strong, but quiet, but you also have humor. Besides, my brother always said, 'Yuuji is a good guy, you can count on him.'... I thought it was fine." ---- turns me off, heads up it's just a pretext

her way of threatening the MC to go in a relationship with him is also bad, cause I hate it when the main characters are forced into things

the MC really should be with those who truly likes him

can't really immerse myself with the "romance", at that point I can feel that I wouldn't really feel any fluff if there's ever gonna be in this novel

welp I guess this is one of the detrimentals of this trope, especially with a fMC that isn't done right

we all know that there's really no love involve between two people in a fake relationship, so the fluff factor isn't really there

the misunderstanding really breaks my heart

I like this because I have no idea where the author is going to take the story. Will be interesting to see the relationship between the Ike and Touka and why its so sour. Although I can give a few guesses why. MC is a chad, knows his place in life, happy for the small things, oblivious to a girl that he thinks is scared of him but actually likes him. (Lol) ... more>> Overall will be chill to read. I won't be mad if the plot turns into the MC developing more. He may be a chad, but he still boring as a box. And not the box from spongebob. <<less
7 Likes · Like Permalink | Report

the story is what you expect it to be, 1 guy that is feared by all is actually a nice guy and after some time he gets recognition by some (mostly girls) and develops into something like a ha**m. what is nice about this story is MC, MC is capable of thinking logically in situations and his inner thoughts are chaotic just as you would expect a guy who got isolated to be (which may be considered normal but similar stories couldn't do that so +++ point). And MC has guy... more>> friends (I know this is very very normal, but when it comes to these types of stories this is something astounding) and his friend is at the very top of the social ladder. And he continues to get friends at about the same level. what is bad about this manga are the girls, while individually they are not bad, when it comes to interacting with MC they get all thoughtful of MC in situations where mc's actions put them in tough situations (this is especially worse for fl). It is to the point where I was on the verge of dropping it. in a short version, it is better than its predecessors though it shows itself to be just a web novel by the character's actions from time to time. Making it a decent read for a web novel. <<less
5 Likes · Like Permalink | Report

It needed to not have the train passing by or, better yet, have the character repeat the line after that. I have no real issues with the protagonist or female leads aside from the cliches being forced on them making them act slightly out of character so the author can make it a cliche harem rom com novel where the protagonist will choose the main heroine anyway despite her being the worst option of the female leads because cliche. It's not what happens that bothers me even, it's how it happens. Anyway,... more>> two star is for lack of ambition and nothing to set it apart from any other harem romcom. <<less
4 Likes · Like Permalink | Report

For some reason each time his scary face was mentioned I was imagining Danny Trejo kind of face, that kinda ruined it for me. The rest is build with standard romcom cliches and if I had to point one thing that irritated me it would be MC selflessness. Overall reading is smooth albeit not remarkable. vol3: Chliched, boring, repetitive. Dull interactions between characters.
4 Likes · Like Permalink | Report

Top tier romcom until the end of volume 2. I highly recommend reading to that point.
Volume 3 has so far been a pretty huge disappointment in terms of introducing too many harem elements. The earlier focus on FL drops off and the story feels generic and unfocused. Maybe it picks up later? It’s just sad because I was really enjoying it for the first 2 volumes. Would be 5 stars if not for the volume 3 falloff.
3 Likes · Like Permalink | Report

Urghh I'd already read it in another language until v1c12 so far so nice.. MC is kinda wholesome it is not your typical lonely beta MC.. He has a pure heart. He is not jealous of his "MC-ish" best friend. I hope any translater will pick it up. I need this!!
2 Likes · Like Permalink | Report

It is a decent read, but I felt like I was reading MTL. The translator uses Grammarly as an editor, which is good for English speakers who know how sentences should flow. However, since the TL isn't fluent, most sentences sound awkward. Just my honest opinion. An example:
Spoiler

Due to the Ike's influence, the uncomfortable feeling of this class is the best in my school life so far, but I can still see the people around me are scared.

Pretty standard romcom light novel. Nothing bad, but also nothing extraordinary. Entire novel plays like a slice of life series and there isn't any real drama at all. Any drama or suspense in the novel, you should be able to see a mile away. In fact, I was able to guess 90% of how volume 1 plays out simply from the novel description on NU and you should be able too. I'm going to drop it. Not because it's particularly bad, but because I just don't see it going anywhere exciting... more>> and felt more like a chore when reading the many slice of life scenes that added nothing to the story. <<less
1 Likes · Like Permalink | Report

It's okay, but it's tiring the MC saying all the time that people are scared of him. It's cliche but overall it's a enjoyable and fast read
1 Likes · Like Permalink | Report

Might be your typical rom-com harem but still better that others One reason is the interactions between characters are amusing especially the MC. He's passive-aggressive that he would be blunt with his remarks on the girls even though they're just teasing him. MC isn't tr*sh. He can fight and quite smart as they've said.
Spoiler

What's even better is that sensei probably gonna be part of the harem. Woo-hoo!

[collapse]
Though he says he's a side character, the story doesn't kind of make his best friend seem like a protagonist... more like just your perfect riajuu.
0 Likes · Like Permalink | Report
Advertisements
Leave a Review (Guidelines)
You must be logged in to rate and post a review. Register an account to get started.