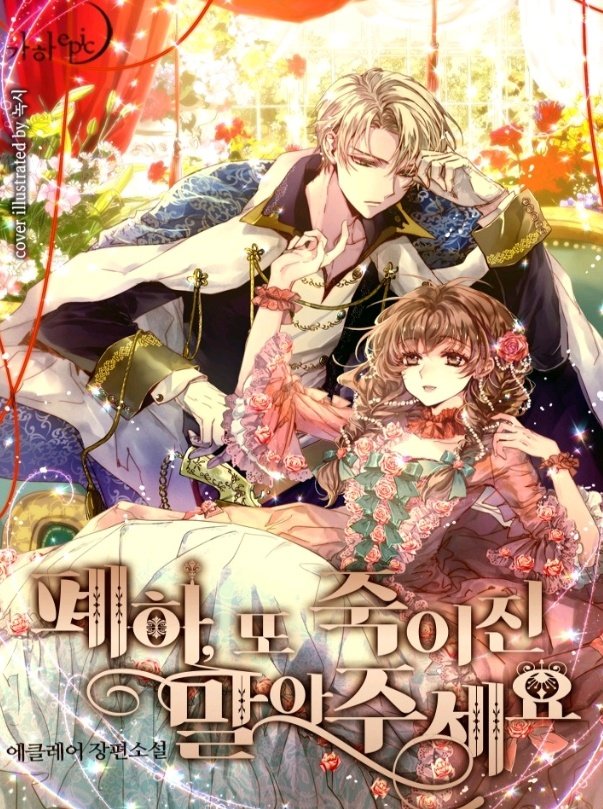 One entry per line
Eclair
에클레어

On the Eighteenth, because of my father’s remonstrance against the tyrant, my head was cut off on the decapitation table along with the rest of my family’s.

And then I woke up again, on my twelfth birthday.

I decided to become the tyrant’s scheming vassal to make the most of my family’s position.

So, Your Majesty, let us get to know each other better.

I will be sincerely good to you. Please don’t kill me again!

“Your Highness, I’m really on your side. I swear!”

However, this promising tyrant, who was distrustful of humanity, became more and more lenient.

“Your Highness, don’t let me deceive you.”

“I’m warning you again, I care about what’s mine, so don’t harm your body without my permission.”

One entry per line
Your Majesty, Please Spare Me This Time
폐하, 또 죽이진 말아주세요

These are recommendation lists which contains Your Majesty, Please Don’t Kill Me Again!. You should give them a visit if you're looking for similar novels to read. Alternatively, you can also create your own list.
More Lists >>>

I absolutely fell in love with this manhwa<3 The characters, Plot, Romance overall just everything, Romance may be slow but I love the fact that they didn't fall in love with each other cuz they were either "Interesting" or by "Misunderstandings" and "Love at first sight" Etc... They gradually fall in love with each other naturally which I love, Their journey throughout the story was stunning <33 And Despite starting as enemies each of them learned different things, Love, Accepting the past, gaining trust, and one learning to be "Human". Both of... more>> them suffer from a tragic past but little by little they go pass through those memories... And I'm so proud of them :) this manhwa involves human nature. I love this manhwa sm! <33 amazing work from the author, you can see the hard work and time they used... <<less
0 Likes · Like Permalink | Report

I feel like this is really underrated. I tried using spoilers tag but Im not too familiar with it sorry. Yeah he was a piece of bull in her first life, ... more>>
Spoiler

but there was actually a valid reason once you get into it!

[collapse]
All in all you can hopefully see how much I love this novel and it's manhwa (It's artwork is sooooo cute and pretty, so unlike the story though :' (. but it does show the dark scenes very nicely) and I hope you at least give the manhwa a chance or the novel, whichever one you want. <<less
11 Likes · Like Permalink | Report

This is not a quick read to pass the time. It involves human nature and human psychology to understand. There is fantastic worldbuilding. This is a a romantic fantasy drama. Plot and Romance development go hand in hand. Season 1 and 2 of the manhwa (up to Ch 105 of the novel) set up the story for the rest of the series. There are some cute moments between the main leads, but their feelings develop slowly but surely. ... more>>
Spoiler

Because of their situations, they consider each other enemies. They shouldn't fall in love. But they do. The ultimate ending for this series is "Rupert and Lariette obtain happiness". Both of our leads have complicated traumatic pasts. Both are distrustful of the other and are enemies at first. But over time, they fall in love with each other naturally, not by misunderstandings or for shallow reasons, but rather because they fall in love with each other's "true self", despite the masks they wear in public and the secrets they desperately hide.

Both Rupert and Lariette are flawed humans, and make mistakes and suffer the consequences. In this series, some allies turn into enemies, and some enemies turn into allies. You don't know until the last moment. In this world, Lariette is betrayed many times, and her faith in what she thought was true is tested.

Lariette, our FL is not a generically nice, self-insert OP chara, even as the regressed character. She has her own headstrong yet timid personality that readers may not agree with. Lariette is a very sweet, lovely character who radiates warmth and comfort. She hides her trauma and hatred from the past deep in her heart, as she suffers greatly when those memories surface... and they do surface and are exposed in a very cruel way.

Rupert is rough around the edges. He is fundamentally a kind, gentle person who acts very rude. His first meeting with Lariette was very bad, and he had threatened her many times at the start, because he had 0 sense. His goal is to survive and become Emperor, and he learns what it means to be a "human" with Lariette's influence. As much as he cherishes her, his world doesn't only revolve around her.

[collapse]
When reading this series, keep an open mind. There is no "filler". Past chapters will be referenced in future ones. Characters you've met once will appear again. Memories of the past influence the decisions of the future. Both RupeLali will grow and change over time - the people they are at the start of S1 is not the same as in the end of S2. As they grow older and mature together, they grow so close, yet they remain so far from each other. During their tender moments together, you just want them to succeed and be happy! But in order to reach their happiness, they have a long journey ahead. Both of them can't be together as a couple, until their past traumas are addressed. They have to have both their own individual willpower to move on and accept the future, and the willingness to share, support, and completely accept the other for this to work. Otherwise, they can never be together. The end of Season 2 is just the beginning. This series explores human nature, what it means to be loved, to trust and believe in others, and for one to grow and make their own decisions and choose their own destiny. Rupelali CHOOSE to fall in love with each other, not because of something shallow like "love at first sight" or "she's interesting". Basically, like Fruits Basket, you have to wade through a lot of pain, suffering, bittersweet feelings, betrayal to get to the [TRUE HAPPY END]. There's a lot of hopeful, cute/comfy moments sprinkled throughout to make the psychological pain and suffering bearable, and the end result in the final volume and a half is worth it. I hope readers will give this series a chance! It's one of my top, very underrated series :) <<less
4 Likes · Like Permalink | Report

I absolutely fell in love with this manhwa, the first ever manhwa that made me fall in love and my 4th manhwa so far that I have read so far. Usually I don't like slow burn romance but RupeLari made me fall for their romance. Its a masterpiece tbh but its extremely underrated. We must make it popular so that it can get an anime adaptation in future
4 Likes · Like Permalink | Report

Came here from the manhwa and I have to say that this is a somewhat decent second chance story. I like that FMC actually has thoughts about killing the ML at first and she does genuinely hate him in the beginning. Like there's no way a person wouldn't hate their killer. () Well it's passable read. 2.4 stars (most of the stars for the cute artwork)
3 Likes · Like Permalink | Report
Leave a Review (Guidelines)
You must be logged in to rate and post a review. Register an account to get started.

One Over Infinity
Advertisements