Novel Updates
RegisterLogin
Theme
Search
Your changes has been saved.
Yes, I’m Straight. But What Have I Done Wrong?

Home >
Novel >
Yes, I’m Straight. But What Have I Done Wrong? 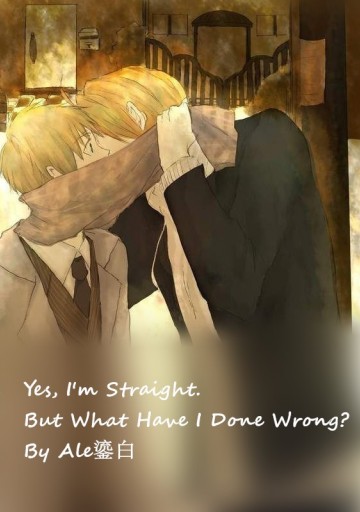 One entry per line
Ale鎏白

Status in Country of Origin. One entry per line
57 chapters (Completed)

“Gosh! How s*upid am I to not even notice that?”

“How many times have I made fool of myself by trying to be a kind roommate?”

“Alas! Being a great and straight roommate is indeed difficult.”

“But, what have I done wrong?”

One entry per line
Why Treat Me, a Straight Boy, Like This?
可是直男又做错了什么呢

These are recommendation lists which contains Yes, I’m Straight. But What Have I Done Wrong?. You should give them a visit if you're looking for similar novels to read. Alternatively, you can also create your own list.
More Lists >>>

Write a Review
14 Reviews sorted by

I.... poor MC, lmao. His obliviousness knows no bounds. I have to be honest, tho, if I was MC, I would just explode and move out of that damn room. Like yeah Coquettish Guy isn't the worst person, but the Domineering Guy acts pisses me off. Rather, it's not the way he acts, but the fact that MC is the only person suffering. He's third wheeling for his roommates, covering for them, and constantly being tricked by Domineering Guy. For example: (not super important to the story but still) ... more>>
Spoiler

in chapter 11, MC is tricked into entering a Friday evening class, which he only took because he thought his buddies would be in it. He doesn't even want the class! He's also the only person in the room who has to do morning exercise: Domineering Guy does basketball and somehow got Coquettish Guy out of it, but not his bro Straight Guy. Like really???? You can get your boyfriend out but not your bestie, who's stuck with both of you all these years? I see how it is.

[collapse]
Anyways I like the story and all but roomies piss me off sometimes. I have hope for Glasses Guy tho! I hope they will get together, the author seems to be setting up a relationship for them anyways so here's to the ship! <<less
18 Likes · Like Permalink | Report

Very cute story. MC is so very innocent and that leads to some very funny situations. He has a very pure heart and mind that he ... more>>
Spoiler

never even once thought of what his friends have as wrong. At most is a little mortified that he caught on so late.

make use of MC to cover for them. More the fault of the overbearing guy. There were moments where I was really angry at him but his own situation with the enchanting (?) guy made me sympathise with him too.

[collapse]
Overall many cute moments, my favourite is probably
Spoiler

when glasses guy (MC's senior) kind of started really having a good feeling for MC. That was when he tricked MC into getting gastric meds for him because he didn't want MC to see him do the exercise routine thing as part of their final evaluation. He thought by the time MC was back, the exam would be over and MC would just go back so he went to his meeting after that. But MC ran all the way, asking people where he was, just to pass him the gastric med, even worried about having taken so long. At that moment glasses guy (and I) went "ah, how nice would it be to have a lover like this".

[collapse]
I've read the whole thing in Chinese, not sure if it's a link issue or what but the links to the English translation is not working >.< <<less
7 Likes · Like Permalink | Report

Oh ho... "Glasses Guy" huh? interesting... hehehe Also little Straight Guy is learning more and more about the Way of the Gay. Or so he thinks at least lolol

[collapse]
You guys should be reading this! It's SO adorable and unique!
6 Likes · Like Permalink | Report

this story is so cute and fluffy. Its super funny and MC is so dense, he starts out always cockblocking his roommates' romance. The majority of the story is a third person view of a cliche relationship, then slowly, we get to see some of mc's own relationship developments in his interactions of MC with ml. story is very short and concise, a fun read with little drama so far.
3 Likes · Like Permalink | Report

Each chapter feels more like a summary from several chapter, and I have no idea if it's really a summary of the author just write it like that. If someone know, please enlighten me. :9 Even with its summary like format, the story is really cute. The MC's denseness know no bounds. There were a lot of times when I wondered how come such a dense person exist. While the love story between uke and seme are rather standard BL, it feel refreshing to read it in (dense) third person view.
3 Likes · Like Permalink | Report

Wow, Glasses Guy shows his heart to MC. I know that thing is not simple. Glasses Guy treats MC so good. It is already not a common friendship. I have to say that MC is so dense. He is not aware of that at all. I hope more romantic interactions between Glasses Guy and Straight Guy
2 Likes · Like Permalink | Report

Ahhh!!! So good! Simply a cute and sweet story. It flows so naturally to me.
1 Likes · Like Permalink | Report

I couldn’t stop myself from writing this review before even completely reading all the translated chapters. This is an overkill for those who like fluff, even 'the' me who is into light-angst these days couldn’t stop my heart from melting...
1 Likes · Like Permalink | Report

Poor MC he just a ball of sunshine, so innocent that make you don't want to stain that innocence.
1 Likes · Like Permalink | Report

In a word, the style is humorous and enjoyable. What move me most is Domineering Guy tries his best to protect their relationship. The love line between Straight Guy and The Glasses-guy is also reasonable.
1 Likes · Like Permalink | Report

This is a fun read. MC is naïve and dense because he doesn’t know what roommates action means, which creates many funny situations. Translation is fantastic, the flow of the story represented very well!
0 Likes · Like Permalink | Report

I don't even know where to begin. This story is AMAZING. I laughed my ass off. It’s an incredible ride. I definitely suggest reading this story. I can already imagine having to book an appointment at the dentist from all the fluff and sweetness.
0 Likes · Like Permalink | Report

All the characters in this book are so cute. Their interactions are so sweet and funny. So far, it become a game of showing affections. Haha, thanks for the translators. The update is stable and the quality is good.
0 Likes · Like Permalink | Report

Surviving this world with my gunswords...