Novel Updates
RegisterLogin
Theme
Search
Your changes has been saved.
Who Allowed You to Get on the Bed

Home >
Novel >
Who Allowed You to Get on the Bed 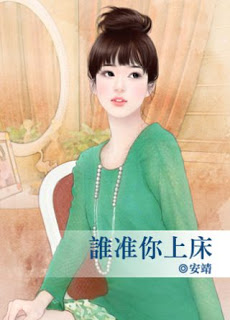 One entry per line
An Jing
安靖

One entry per line
喵喵屋工作室

When she loves him she hopes everyday and waits everyday for him, feeling grievances like a little daughter-in-law; When she didn’t want to love him, he is overbearingly like a jealous husband wrapping around her everyday and noisy everyday.

Anyone who knows Han Luoting understands that HE, is firm and old-fashioned.

He has always been cold and indifferent to the women. Although there are a lot of women that admire his handsome appearance, no woman dares to be as stupid as Du Linglan, knowing that man doesn’t love her, she is still stupid enough to accompany him to roll under the sheet for a night.

To Du Linglan, as long as SHE loves him, it’s enough.

It isn’t until he coldly pushes her away that she decided she will never love this man anymore.

It’s just that her forefoot is gone, Han Luoting, a man who has never had a heart for her actually chases her before her eyes. He is very clumsy and changes his style hard to please her.

Pregnant woman? Looking at Du Linglan with a big belly, Han Luoting is very sure that the man who makes her get a big belly, who else besides him?

Cold eyes look at one person after another shows love to her, he is like a jealous husband can’t wait to catch her into the auditorium and declare sovereignty.

Since this stupid woman foolishly loves him for so many years then he will marry her home as a legal wife.

It shouldn’t be excessive, but she not only not let him get on the bed still keeps on saying that she doesn’t want to marry him!

These are recommendation lists which contains Who Allowed You to Get on the Bed. You should give them a visit if you're looking for similar novels to read. Alternatively, you can also create your own list.
More Lists >>>

Hello everyone, first of all I would like to give an applause to the translator for picking this novel. Thank yoouu soo much 💋 I think am gonna come back and gives my final verdict about this novel, once I finish reading it. All I could say after read up to chap 5 is, this novel seems promising. Nice plot and the most important thing for me is, it is not too fictional. Both of them are from the same background and level (?). Not a love between the rich and poor, but... more>> between the leader and direct subordinate (let me know if I'm wrong). I hope this will be getting better. Lastly thank you to the translator for your hardwork, and everyone~~ please enjoy this novel. 💓 <<less
5 Likes · Like Permalink | Report

still wondering why ML called the other woman's name in midst of his heat/doing the deed (maybe bc he relied on her for a sense of security due to his past before MC--therefore not in the romantic sense) idk seems sketchy to me either way lol esp in the extra where he calls her name AFTER MC left, the first thing I thought was "scum??" instead of "oh he likes MC" bc if ya like the MC whilst/before doing the deed (in his justification he was drugged but still) why didn't you call her instead of the other girl?? This reader will probably never understand novel logic. Then again I MTL so I might be missing things

[collapse]
But it was a satisfactory read, with a cute extra "detailing" (emotionally) their first night together, which was in the spoiler I just threw in above ML is dense af, while everyone else is aware. No third party thank goodness, and really just misunderstandings that get covered pretty reasonably and quickly since it's a short story. FL is pretty resolute tbh and ML doesn't deserve to be left hanging for too long so when she did accept him again it wasn't too unpleasant. MTL is relatively easy to understand.
3 Likes · Like Permalink | Report

Good premise, but the story is lacking. There I no real conflict. ... more>>
Spoiler

She leaves, he comes after her, says he loves her, she forgives him. Well, what about when he called the missus name during s*x the first time? Or all those times he put the misses first? You don't just change magically over night.

What they cold have done to make the story more interesting was:

MC leaves when she finds out she is pregnant, he follows, she keeps him at arms length, he courts her, she starts to trust him, he is forced to chooses the misses over her in a life or death/or he refuses to leave his job becaue he can't leave the Miss (it is what he is used to, it is his job, she is his most important person, etc), misses doesn't see anything wrong about it, MC leaves him because she thinks that although he loves her she will never be more important then the Misses, ML does soul-searching and decides to choose the MC, goes to win her back again,.. ML Resigns. Re-finds MC and tried to win her back again. End there on a hopeful note.... that would have been a much more interesting story with a HEA

[collapse]
Also, if that family really loved the MC like family, they would have never let her continue to be a servant/bodyguard. <<less
2 Likes · Like Permalink | Report
Leave a Review (Guidelines)
You must be logged in to rate and post a review. Register an account to get started.