Novel Updates
RegisterLogin
Theme
Search
Your changes has been saved.
Advertisements
We Should Have Slept While Only Holding Hands, And Yet?!

Home >
Novel >
We Should Have Slept While Only Holding Hands, And Yet?! 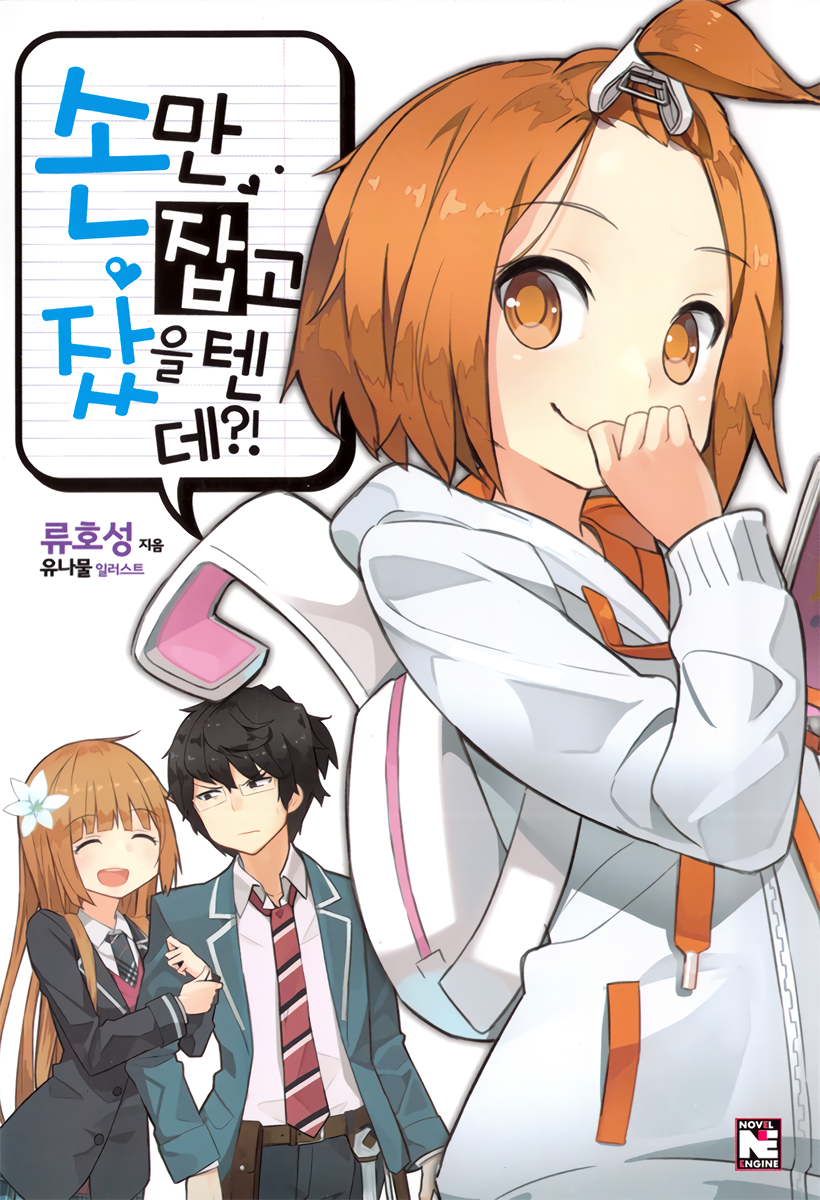 Status in Country of Origin. One entry per line
8 Volumes (Complete)

My childhood friend who lived next door since preschool, Ja Saeyeon. On the outside, she appears like an adequately pretty girl who’s like a drawing, but only her body has grown; she was a girl whose mental age was truly that of an elementary schooler. We’d spend time together from time to time, but Saeyeon’s parents, who were often not home, would pay me to take care of her, so we merely had a ‘work’ relationship. But this time her spoiled behavior was more severe for some reason. She fretfully asked for me to sleep together with her since she was too scared to sleep by herself. I even sang her a lullaby, but she thought that I was going to run away so, with great care, she asked if we could sleep while holding hands. We then slept together. Really, seriously, we merely slept while only holding hands.

But the next morning⎯⎯⎯there was a young girl lying down between us?!

These are recommendation lists which contains We Should Have Slept While Only Holding Hands, And Yet?!. You should give them a visit if you're looking for similar novels to read. Alternatively, you can also create your own list.
More Lists >>>

The whole Volume 1 took all of my emotions. I admit that I'm not the most kind guy while reading this. I even enjoyed the Main heroine's suffering but dang. The ending of volume 1 kicked me of and stabbed me through the heart while making me happy. I can say that the MC's attitude is pretty logical so I can't blame him and yes it's kinda annoying but you gotta face it. His past is what made him that way. The FeMC is the one that really broke me. I... more>> recommend to just read it until the end of Volume 1 & if you didn't enjoy the ending then you can drop this. As for me? I'll continue reading this gem in hopes of cleansing my soul from NTR & despair. <<less
24 Likes · Like Permalink | Report

A story about a guy that is a complete d*ck to his future wife and was even worse in the future resulting in their divorce and having their daughter go back to the past to make that guy's head "work" properly before it completely shuts down... Oh and up to this point he has made progress showing emotions to the daughter but as far as emotions to the wife is concerned, he seriously doesn't seem to care... having it be 8 volumes long of this seriously has me question if this is good or not but... meh

If you were following the translator, you'll know that he told most of us readers to not read this until volume 3 was completely translated. That is because volume 1&2 are a build-up to volume 3. Now, I didn't care and still read it anyways, because it still was an entertaining and interesting series. Still, the translator said big things were coming for volume 3. And boy was he right. It's such a big twist that it makes it all worthwhile even if by some chance you weren't enjoying the novel. From... more>> this point on, though I try avoid spoilers im going to be giving impressions of each volume, and as such im gonna be giving away the direction the novel is going. And that can be considered spoilers as well.
Spoiler

So this series is about MC who claims to be the mad scientist of this era and is pretty much a dislikeable guy. The novel explains you why he became the twisted person he is, and unless you're reading this hoping for some self-satisfaction or self-insertion, you have to understand the guy and why he does what he does. One day he sleeps with his childhood friend while just holding hands and the next morning her daughter from the future appears in the same bed, saying she came from the future to fix her family because MC and his childhood friend are divorced in the future. That's basically what volume 1's all about. At best it may be "interesting", but mainly because of the focus in the character's psych and emotions. Plotwise this is just another romcom with a twist where the MC is crazy.

Volume 2 evolves this concept a bit. It remains a romcom but now you see how the plot of future travel starts being more relevant to the story. You get a glimpse of the reasons he and his childhood friend broke up and realize that whatever happened in the future may be more important and dark than what you think.

Volume 3 is where sh*t goes down. Whatever romcom-esque feeling this novel gave you was just a buildup so you'd realize how grave the whole situation is, to the point it even becomes despairful. This is now a drama built on a 2 volume preparation of relationship building and some quamtum science. It's no longer about saving a marriage or making a child happy, or just getting the girl. It's about trying to fix an unfixable broken person and family. And if that doesn't get you pumped up and willing to read this novel then just go ahead and skip it bacause it's only gonna get heavier from now on. The characters are flawed. Even if it is obvious to you and your morals brought by common sense, you'll be forced to understand that when faced with adversity, a person may not able to change, even if its the obvious solution. It gets hard to read to be honest. Not because it's cringy or badly written. On the contrary, its so well written that even if on a personal level you reject what's happening, you gotta understand and just hope things change soon.

[collapse]
Perhaps you won't enjoy this as much as I did. Im a lover of drama and psychological plots, and instead of stories that throw enemies to a hero-like MC, I prefer watching a cast of flawed characters that during the course of the story interact and change. For this im willing to take some melodrama, and to be honest I even enjoy it. Anyways, this is good stuff. Go and read it. Persevere, and you'll be rewarded. <<less
8 Likes · Like Permalink | Report

Honestly, not what I was expecting at all. Starts off fairly slow, but goes from 0 to 100 with some crazy plot twists. The appeal of the story is likely subjective to the tastes of the reader, and it's definitely a more serious read from what I've seen until the end of volume 3 (You really can't only read volume 1/2, as mentioned by the TL quite often in his notes). It should be noted that the chapters are fairly long. Overall, it has an actually interesting plot & the English... more>> translation is excellent quality. <<less
3 Likes · Like Permalink | Report

So, I actually have an account before but forgotten my user and pass, which is why I even had to go my way to create a new email account and an account for NU. Why? Cuz this novel is just that awesome that''s why. I had never expected the amount of character build ups in this novel and its plot twist in Volume 3. Many here who aren't used to a cynical MC and wants a justice loving harem type dudes would surely not get past after 3-4 chapters in volume... more>> 1. If you have seen the anime Steins; Gate, you can say it has similarities on this novel and by similarities I didn't just mean the mad scientist and time travelling part, but the feels it will give you and the suffering of the MC. For those who are in doubt, at the very least, like what the translator said, read it up until volume 3. If you still didn't like it then drop it immediately since I highly doubt you will like this novel no matter what it does in the future and is simply aren't up in your alley. Don't let other's opinion dictate whether you like this novel or not. I just implore you to read it up until volume 3 that's all. <<less
3 Likes · Like Permalink | Report

Amazing, just amazing. Just volume 1 itself is amazing, even if you dont want to read the rest I implore you to atleast try this out. The MC and ML finds a little girl sleeping between them in the morning. The girl in question tells them that they are her parents, and should take responsiblity. Normally this wouldn't be much of an issue its just that the MC DESPISES the ML. He is aware of her feelings but wants absolutely nothing to do with the ML. As such the girl egging... more>> him isnt really sitting well with him... The characterisations for the MC and the "daughter" are phenomenal, every single one of their interaction is perfectly written. And the MC's hatred for the ML while at first might make him look like an ass but its actually very understandable given his life. <<less
2 Likes · Like Permalink | Report

Solid 4.6 imo. I believe a large portion of the 1 star reviews feel like they come from readers who've only read the first few chapters. While I agree parts of the first volume frustrated me, rereading them after I've read the latest chapter adds a whole new dimension and makes me appreciate it a lot more. Definitely recommend
1 Likes · Like Permalink | Report
Leave a Review (Guidelines)
You must be logged in to rate and post a review. Register an account to get started.

To Love, Once Again
Advertisements