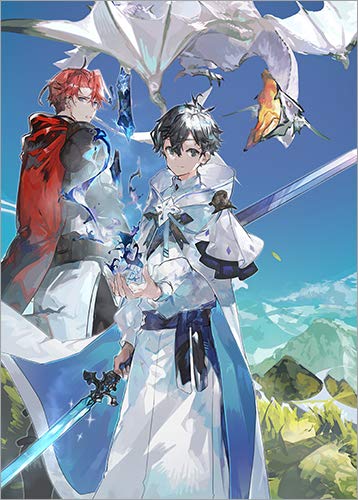 This is the story of Ryo, who was reincarnated in the world of swords and magic.

It is a story of the royal road to survive using the magic of water attribute.

What is magic? What is swordsmanship?

How does it relate to the laws of physics that we know?

Or what is politics? What is a nation?

Why are there many 『kingdoms』 in reincarnation stories? Will republics not work?

Can it be written …?

Since it is a water-based magician, so it shall start with 『Hydrogen bond』!

•This is not a domestic affairs cheat story.
•There will be no harem development.
•It is not a science novel.
•This story is a work of fiction.
•This story is of a protagonist that is opportunistic/acts at their own convenience.

These are recommendation lists which contains Water Magician. You should give them a visit if you're looking for similar novels to read. Alternatively, you can also create your own list.
More Lists >>>

A slow-paced adventure story about Ryo and his friends. This story has similar vibes as I got Transferred in the Middle of a Mountain. Less drama, no romance, and a lot of funny dialogue with the side characters (I love Abel!). Don't expect something like dramatic up-and-down plot development with this one. If you like fun adventure story to read during leisure then you may like this one!
0 Likes · Like Permalink | Report

This is pretty good, at first the world is pretty small, but it slowly expands with new characters and places. Its a little boring at first but bear with it, it's pretty good.
Spoiler

Around chapter 25-31 Is the first human contact hes had.

Slow-paced slice of life story. The key is the last line of the description: "Please enjoy Ryo’s world that expands little by little." So here's a story where the main character starts off in the middle of nowhere, all alone, gradually gets used to his abilities, starts meeting people, starts traveling, gets to know the world, gets involved with the world, so on and so forth. While I say it's slow-paced slice of life, there is proper action and adventure along the way. Ryo starts as kind of a chicken, but gradually... more>> gains confidence and strength. Various tags are lacking, but at least up to the point where I've read there is no harem (and a very good reason for it despite harems being acceptable in the setting). There are some "misunderstandings" setting up humor or Ryo showing off his strength to amaze people, but they actually get resolved pretty fast and even Ryo seems to understand when he's become strong despite being a japanese protagonist. There's a little romance. Slow-paced, but by the point the heroine shows up it should be obvious that neither she nor Ryo needs to rush. It's not for everyone because it is: slow-paced, slice of life, isekai, non-harem, a protagonist who feels like an average person for better or worse. If you don't mind those things, give it a try for sure. <<less
8 Likes · Like Permalink | Report

IT IS NOT SLOW. Yes it takes like 100 chapters for them to hug. Which might seem like it's a lot but after the "training" arc it's like 2 month into the story and he was away from the city where she was for more than a month on requests but I'll get to that later. And she usually gets like 2-3 sentences per her appearance so not a lot of screentime for the FMC. Right from their first meeting she was staring at him fascinated because of the Robe he got from the fairy king or whatever that was then she helps him find some books then they spar once and then he leaves for 10 days (reminder that she is supposed to be like 200 years old seasoned veteran adventurer who broke an arm of some noble she is training because he tried to r*pe her) and she IS GRUMPY and behaves in such a way that everyone in the castle she is staying in immediately notices her weird behaviour. Even she is saying to herself how she misses him. After literally meeting him 3 times. When he is coming back in 10 days... Then they eat curry. Yes because when you use the trope of getting transported/reincarnated to a completely different world that's what you do if you are Japanese. You eat curry/rice take a lot of baths and use honorifics. This is obviously not something specific to this novel but yeah. And while eating curry she notices that he is really enjoying the meal so that means he is awesome and they are close to each other. Then he buys a house and she is halfway living there. Then another request this time for 40 days. She finds out that he had to go to a different city in the kingdom (royal capital) on the way back because of reasons so she jumps on the captain of the knights so that she can go there. After they know each other (the MC) for 2 months. Because this 200 y.o. highschool teenager can't stand it if she can't see him right this instant. Then they meet there and she hugs him in front of everyone like it is the obvious thing to do as if he was her long lost lover she hasn't seen for centuries. Then they meet another elf. This time 2000 years old. And she is completely smitten by him (more or less). In an instant. Because of the robe. And another male elf thinks the MC somehow charmed the uber old elf and tries to beat the MC and get's beaten instead by the main female character. I hate myself for reading it and even more for even bothering to write this review. TLDR of the romance he is a plank of wood and she behaves like a brain-damaged 13y.o. fan of a pop idol. About his enemies. There are none. So far he met a few "beings" that he could not kill. A Dragon king in the early chapters that wasn't hostile. A griffon that wasn't hostile. A kraken he was fighting under water. And one demon thingy that he fought twice and hasn't really lost. That demon thingy was able to literally demolish a Hero character of the different world who is supposed to kill the Demon king and the demon thingy said that the MC is 10000x stronger than the Hero. Everyone else be it allies or enemies are so far beneath the MC it's not even worth mentioning them. His allies constantly say things like "we can't antagonize him ever otherwise we are gone." Or he can make this country disappear in an instant hopefully he won't defect to another country.

[collapse]
The sad part is that this novel isn't even the shittiest thing I've read in past few days it's just that some of the reviews were a bit... biased so I felt the need to jump on the opportunity to be a smartass and "fix" them. So far I've read worse and if you have nothing else to read go for it. Translation is good which is something I am willing to say about anything other than blatant mtl. <<less
1 Likes · Like Permalink | Report

Hello! I'm Tseirp, translating this novel. I'm pretty much hooked on this novel at this moment. Currently at ch114 and reading it every day. (Edit on 14 Jul: I'm at Ch270 now) Pros:
- The story really picks up in world building and character building once MC meets other characters from Chapter 28 onward. The other characters are quite well built, the banter between MC and others is interesting and hilarious at moments, the MC is seriously OP but its not as though the world around is hopeless without him... more>> (Almost the entire first arc battle is done without MC at all). - There are other strong characters in the book. Some are allies, some are neutral with other goals, some are rivals?, some are enemies. Being OP, the MC can bulldoze over most people in the world but he does have a few characters on par with him that he can't win against as of the current chapter. - The battles are interesting and diverse, not those one hit and its over fights. But when MC dominates he really does. - The romance with FMC, albeit little, is quite nice. Cons: - Some might find that the story is too slow life at times (the MC isn't those shonen protagonist who goes around the world solving everyone's problems). - Towards the later parts of the 1st book, its clear that the author places emphasis on world building more than MC growth (since he's already OP), so there are a lot of shadow movements, conspiracies, clashes between nations that doesn't necessarily involve the MC. At any rate, give the novel a chance until you finish Volume 1 Part 4 (Chapter 74) :) <<less
1 Likes · Like Permalink | Report

It's a simple slow isekai with a rather positive MC. It's only the MC so far, getting used to how magic works and how his SLOW-LIFE will work. If you are looking for a relaxing read, I recommend it.
1 Likes · Like Permalink | Report

The first few chapter was rather boring, but the rest is really good. Excellent world building, history, and power system. It's a fun read and no heavy plot so far. The side characters are written quite well, they often appears here and there. The MC is a silly boy with a lot of tsukkomi. Although he's OP, he didn't do unreasonable things like destroying enemy cities to show power and gains awe from mobs. He also has equal opponents so his strength isn't really a cheat.
0 Likes · Like Permalink | Report
Advertisements
Leave a Review (Guidelines)
You must be logged in to rate and post a review. Register an account to get started.

reincarnated as an omnicute omnigod