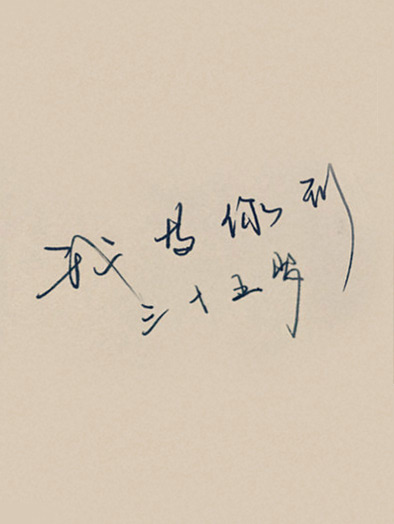 Status in Country of Origin. One entry per line
30 chapters (Completed)

The diary of Nan Kang of his relationship with his ex-boyfriend, expressing that he was willing to wait for him until 35 years old.

From morning to night, from the moment of love, the ending should have been predicted. The world praises love, but never admits love. Why is it wrong? Nan Kang, 35 years old is too long, and the waters in Xiangjiang is too cold. For fear that you are alone in the distant heavens, and he, with a woman and maybe a child, in the paradise at home. Nan Kang, do you regret waiting?

(It is said that this is a real story of a real person, Nan Kang, who has written other stories in his life. He had a loving boyfriend who, unable to withstand pressure from family and society, married a woman. In between March 9th to March 12th in 2008, Nan Kang jumped into the waters of Xiangjiang and ended his life. In 2016, readers commemorated his would-be 35th birthday.)

When an Angst Writer Meets a Doting Writer (1)

These are recommendation lists which contains Waiting Until 35 Years Old. You should give them a visit if you're looking for similar novels to read. Alternatively, you can also create your own list.
More Lists >>>

Warning! This is a very moving piece, where every word the author writes depicts the pain and melancholy behind not being able to move on, and to love someone everyone says you shouldn’t. I 100% agree with what translator said, if you treat this more as a story, maybe then the blow will soften. But as someone who cried through it all regardless, sending virtual hugs in advance to those who need it.
6 Likes · Like Permalink | Report

So beautiful, and so sad. A really good description of the loneliness of a broken heart. Also, there is something really heart-wrecking in how the pain and suffering of the MC are conveyed through so few words. A good read for sure, if you like to hurt sometimes.
5 Likes · Like Permalink | Report

Oh yeah, definitely read this as a fictional story. Because it was already completed and the chapter were so short, I didn't really bother reading the summary and only took note of the Tragedy tag (I'm not a fan of tragedies but don't mind reading if the story is short and the rating is high). I read through the whole thing in less than 20 minutes. I only read the summary after reading the author's note to read this as a story. Looking at this as a story alone, this is... more>> a sad introspective piece on how, after finding and getting together with the love of his life, the MC can't stop loving and hoping for the ML despite the fact that the pressures of society just won't let them be together. The loneliness felt throughout the story is heart-wrenching in itself. It's a quick read if you're not really that into the tragic genre, but a nice one if you are interested in any way.
Spoiler

The summary/backstory does make it 1000x sadder though

When you read this novel, it's like you're reading someone's diary rather than storytelling novel that usually have multiple POVs and general narration. Because you only get to know one person's perspective, we don't ever get to know the other person's side of the story which makes it sad. The whole thing is written in the perspective of the MC who only gives a brief and vague account of his experiences and thoughts leading up to the end of the novel. After I read the novel, it actually peaked my interested to... more>> verify out if this was actually based off a true story. Check out the spoiler box below if you want to know what I found. (It's not an actual spoiler, I just put it there since it's not actual review and just a side thing I got into)
Spoiler

I searched "南康白起新闻" and I came across a forum (南康白起的事情到底是真的么？) that also discussed about the authenticity. I MLT-ed the forum and from what I understand, NanKang Baiqi (the author and MC of this novel) does has a webpage on Baidu Encyclopedia that outlines his background and timeline. Supposedly, it was confirmed that NanKang Baiqi did exist and did pass away. However, one person pointed out that there's no news report about NanKang drowning himself in Xiangjiang River.

It seemed like the responder to the question concluded that the author/MC was a real person and has passed away, but it is unknown if this novel is a genuine auto-biography or if it's just fictional. Since I don't know Chinese, I couldn't lookup the sites that the responder referenced like Xiaoxiang Morning News, the studio that published NanKing's works, and Baidu Encyclopedia.

[collapse]
But regardless if this is a true story or not, it doesn't make it any less tear jerking. Because this is a diary, the flow of events described are sporadic and disorganized. There's unknown time gaps between the entries as the only talks about whatever is on his mind rather than retelling the full story. I like this writing style because it seems so much more personal and human. It's a short, but it is worth reading :) <<less
3 Likes · Like Permalink | Report

This is so short, and actually the author didn't describe much, but it's heartbreaking. 5/5
Spoiler

I love his friend. Even though it was a bad ending, I'm glad he still had support during a tough time in his life. Thank you nameless friend.. TT

More people need to read this story, something about the writing style of the author lets it convey this piece so well. Then you go back and read the summary and let the feels hit you like a truck.
2 Likes · Like Permalink | Report

This is short, yet can broke your heart completely.
1 Likes · Like Permalink | Report

I'm usually not the type to read tragic tags, but this one was an exception. I got moved by the way the author writes and tried to think about it as fictional rather than non-fiction. The thought of this being an actual event in someone's life is heartbreaking.
1 Likes · Like Permalink | Report
Leave a Review (Guidelines)
You must be logged in to rate and post a review. Register an account to get started.

I Reincarnated as A Little Girl?!

The Familiar of Fate