Novel Updates
RegisterLogin
Theme
Search
Your changes has been saved.
Violant of the Silver

Home >
Novel >
Violant of the Silver 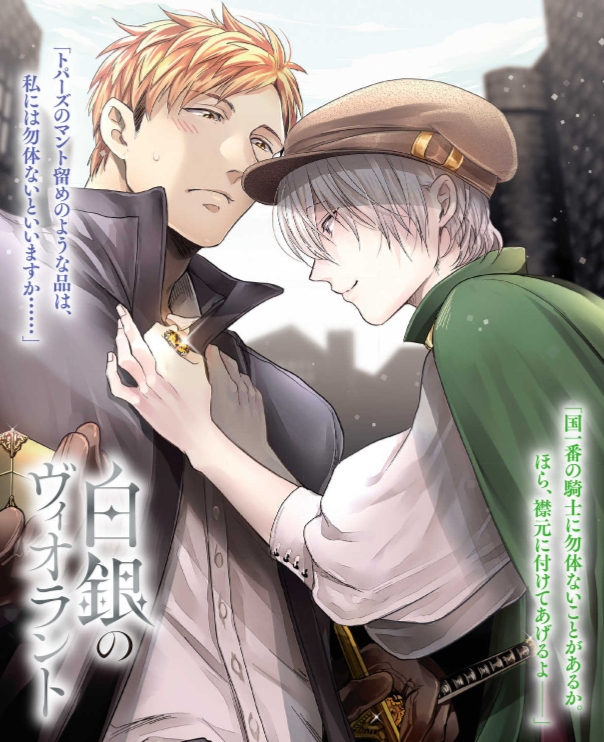 One entry per line
イクヤス

Violant Lesserhain. That’s the name of the villain who appears in the comic “Princess Dances with the Night.” After the protagonist’s accidental death, for some reason he wakes up as Vio, and decides to walk in his shoes. Then it strikes him: before the “Hero” slays him, he must not tread a villain’s path…

One entry per line
VOS
白銀のヴィオラント

Nurturing the Hero to Avoid Death (6)
Transmigrating into a Mob Character to Rehabilitate the Villain Plan (4)
My New Life, Won’t You Please Become Peaceful! (2)
Quickly Wear the Face of the Devil (2)
Villain Days (2)
The Scum Villain’s Self-Saving System (2)

These are recommendation lists which contains Violant of the Silver. You should give them a visit if you're looking for similar novels to read. Alternatively, you can also create your own list.
More Lists >>>

Slow burn, and honestly, it makes me want to cringe. Idk Japanese novels sometimes give me this weird cringey vibe, especially when the setting is Western fantasy. Is it just me? It feels like something I'd write in my preteen era lol.
4 Likes · Like Permalink | Report

Not much has happened since it's evidently a slow burn but it's very much enjoyable and I really like the character dynamics between ML and MC. I also like MC's circumstances as someone who has both transmigrated and has had to deal with the aftermath trauma. I hope the romance comes soon!!
1 Likes · Like Permalink | Report

If you're looking for some sweet and slow bl romance, this is the novel for you. The pacing is one of the best I've seen among all the bl novels I've perused. There isn't too much inner monologue that you would usually see in Japanese web novels, which is a nice change. The best part is that although this is story has romance, that isn't the only thing the novel has to offer. I was very surprised to see politics sprinkled in ... more>>
Spoiler

[collapse]
There are even fight scenes with swordplay and magic. Moreover, the mechanics of magic aren't glossed over like in other novels. It's clear that a lot of work and thought was put in writing this story. <<less
28 Likes · Like Permalink | Report

Super Recommended!! This novel emphasis more on the story. There's also romance but it was slow pace. Their romance-relationship come after the master-servant relationship. The MC (uke) not that girlish, though he is super pretty. He is quite manly and I guess too kind~ well he is a modern person so its understadable. The story is still ongoing and the author often updates. This is a mix of sweet and bitter story though, also lots of politics. You'll feel like riding a rollercoaster when reading this novel. So... Just Do (reading) It!
21 Likes · Like Permalink | Report

I have already read the raw, not until the latest update though. The romance is slow-paced, it doesn't feel rushed or pushed, and above all, it's very sweet with a bit bitter mixed. I like how story unfold, I can feel the author's seriousness, passion in writing. It's not all about romance, but also about a very little bit of politics and serious fight in swords and magic. ... more>>
Spoiler

the politics parts were not mainly played by protag, but by others but the protag's heavily involved

[collapse]
I think the fight scenes were written well, the author even made a theory on magic in this world, the magic structure, components, etc
Spoiler

(the protag is a magic hobbyist)

[collapse]
I haven't read much BL novels, but I think this one is pretty well balanced and well written compared with other BL novels I have read thus far (in BL category, my #1 favorite) I think the component between romance, fights, and slice of life, is well balanced. Overall, I really recommend this novel, 4.7/5 (the -0.3 is for a bit of plotholes in the story, but I think since the story is enjoyable, it doesn't really matter)
Spoiler

One of the plotholes I have been unable to understand is how come he became so traumatized to what happened to the original host, I'm quite sure it's the soul transmigration/possesion, not the "old memory resurfaced" type, but well for this part I think maybe it's just that the original host's memories are much too vivid when he had them replayed in his brain during his fever, so it felt like he experienced it himself

[collapse]
Edit : I caught up with the latest release, this is really good.
Spoiler

This even has a war arc! I thought it would never happen! Seeing how the author wrote the story thus far, I kinda expecting it to have war strategy included in the story, since the author has been so thorough in writing this story

A slice-of-life story about a young noble boy who was betrayed by his protector, scorned by his family, and banished to a small town on the outskirts of their territory. Never leaving the mansion, he tries his best each day to be a good lord and take care of his people. He is well-loved by his servants, citizens, and his new dog-like knight. So far, this is a simple read with relaxed pacing. The main character is reincarnated, but he is fully integrated with the original personality and his knowledge of... more>> future events is barely mentioned or used. The translation quality starts out good, but after switching to the 3rd translator, it became a lot harder to read due to lots of grammatical and continuity errors. (Maybe the new translator is doing MTL or is not an English speaker.) I appreciate their hard work, but it does make it a lot harder to enjoy the story. <<less
6 Likes · Like Permalink | Report

The story has only just started, but I'm enjoying it so far. The vivid imagery really brings the magic to life. Violant's struggles with PTSD are not side-stepped and forgotten, so I'm looking forward to see how his character develops. The background information for Violant is well-done and summarizes his family situation and situation in the town appropriately. I have really been looking forward to the updates for this novel. I feel a ton of hope and anticipation toward its progression.
6 Likes · Like Permalink | Report

Sleepchaser stated that this story is well-written and having a blast from translating it, I also am enjoying reading this. It has been a while since I have read a good story like this with a great plot & other aspects. I am now looking forward how it will have a grand finale
3 Likes · Like Permalink | Report

I can't wait to read more!! I wonder how the ML will make MC accept him as a knight!!! And how their relationship will progress into love!!!!!!
2 Likes · Like Permalink | Report
Leave a Review (Guidelines)
You must be logged in to rate and post a review. Register an account to get started.

A World in Chaos

Reincarnated As An Atypical Merchant