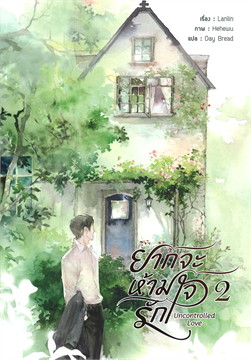 Status in Country of Origin. One entry per line
2 Volumes (31 Chapters) + 1 Extra

Shu Nian who grew up in the orphanage dreamed of becoming a princess since childhood so that a prince will come to rescue him. In the end, the one who came was not a prince but a cranky 「master」 Xie Yan…

Xie Yan believed that he didn’t like men and unable to tolerate the advancement of the man beside him. Hence he tried to send Shu Nian away from his sight. However, unbeknownst to him that by sending him away, he also sent away the 「stabilizer」 to his temperament…

One wants to love him while one doesn’t want his love. 「Love」 between these two men, will they be able to achieve a common ground one day? It’s not like he never held men before but there are only two words to illustrate this feeling — very stiff. There’s nothing good about it!

It feels completely different when holding girls, girls are soft. Xiao Nian is very flexable, very lithe with a slim yet strong waist…

Quickly shaking his head to remove the vague idea of 「Xiao Nian seems to be better than girls」 to the outer space. Xie Yan turned pale and went back to the living room.

One entry per line
不可抗力

These are recommendation lists which contains Uncontrolled Love. You should give them a visit if you're looking for similar novels to read. Alternatively, you can also create your own list.
More Lists >>>

I actually read the Chinese novel as well as watch the movie. I hate and love this novel. When I'm feeling hateful, then
Spoiler

[collapse]
If I'm in a good mood, then
Spoiler

[collapse]
This novel gave me mixed feeling. I hate Xie Yan sometime, my Shu Nian is so pitiful.
0 Likes · Like Permalink | Report

I can't stand that disgusting woman who caused a misunderstanding between XY and SN. She goes on a blind date with XY, both of them unwilling, and made her family believed that XY took her virginity, who then wants the marriage to go through. Then in the HE chapter, she is allowed in that same house as them. Honestly if that's the HE version then I'd rather the BE be the only ending available. At least that piece of sh*t is longer in contact with XY.

I recommend reading this story only if you are interested in themes such as: I don’t know how to rate this novel. The writing, plot, and even the ending are not ‘bad’. However, something... more>> about the execution left me unsatisfied and even upset. I agree with the view that some of the drama is unnecessary and there only for the sake of drama. I feel like the story had more potential to explore the themes presented better. I also kind of wish the extra explored the last minute love rival rather than an oddly rushed ”happy alternative ending”. I would give 5 stars to see her regret her part in what happened. Well... it would also help certain characters have more depth. Really, the ending just needed to show long-lasting impact to the world beyond the male lead. Some characterization of other characters along the way wouldn’t hurt. What I hate most about the alternative ending:
Spoiler

The impressionable orphan who thought he was in love with a straight man kept a positive relationship with the yaoi couple after he found out otherwise. Wtf? A bent man denied him by leading the boy to believe the man was not the same orientation. It is true that the man could never give the boy romantic love, but the boy who went to such extreme measures to keep the man by his side happily accepted this ending when the excuse was no longer valid? The Male lead allows someone who hurt his lover around his family? I *suppose* it can be presumed the boy moved on after much trouble.

I do like that the main couple seem to have adopted though... It was a nice touch that went back to the main characters origins. If only the adoption or at least donating money to orphanages also happened in the real ending.

I don't like it. The ML is disgusting. The MC deserves better. Though the novel is well written and the the translation is excellent, its just that I can't stand the shameless, obnoxious, liar, scum ML. That 1 star is for him.
3 Likes · Like Permalink | Report

I am not a fan of angst and melodrama. This novel has both aplenty. I loved the characters though... realistic, flawed and endearing. The author is very skilled at making her characters come alive, with their emotions so overwhelming and heartfelt. What I did not like was the constant drama created by the author... drama just for the sake of drama. Halfway through the book, ShuNian already went through so much bullshit, that each new drama seemed more and more contrived and unrealistic. The mere fact that the author had to... more>> write an alternate ending, shows some incoherence and indecisiveness. Or else, why the need for another ending? Did frustrated readers threaten her at gunpoint? lol <<less
2 Likes · Like Permalink | Report

mannnn why the author plays with our hearts so much 😭 i was really sad with the last chapter (ending) and was regretting reading the story, then I continued with the extras and here I am, smiling again.. I really like the extras. They're like the true ending. Well this story is good enough, most of the times heart-breaking. You can totally understand how low-confidence MC is, the is older than ml, with average look, nothing special, so he just accept anything lies upon him. I got mad at ML something,... more>> cause we really sounds like typical rude rich boy who get anything he wants, that he often disregard people's feeling. Still, glad I finish the whole story at the end. <<less
1 Likes · Like Permalink | Report

Volume 1: 4 Stars Volume 2: 3.75 Stars "Shu Nian gave him a feeling of having a candy hidden in his pocket where others wouldn't be able to have a taste except for himself who had already enjoyed the deep and hidden sweetness." This story is so bittersweet. One second everything is beautiful and happy, and the next I'm crying uncontrollably. There were a couple of scenes, especially the entirety of volume 2 chapter 2, that I wasn't a big fan of. Some of them felt like they were only put... more>> in for extra drama. But those didn't take away from my overall enjoyment of these novels. The ending was really sweet, and the extra scene was pretty funny. This duology was really good, and I look forward to reading more novels by Lan Lin. <<less
1 Likes · Like Permalink | Report
Leave a Review (Guidelines)
You must be logged in to rate and post a review. Register an account to get started.

Angel in the Pandemic