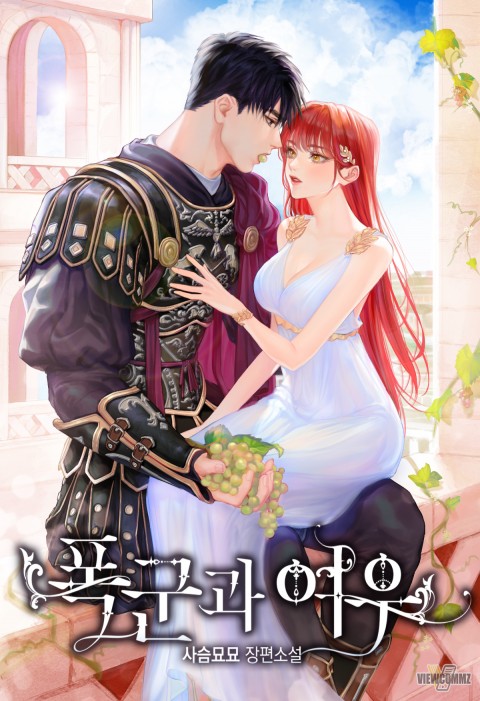 One entry per line
사슴묘묘

One entry per line
Rta
르타

Status in Country of Origin. One entry per line
114 Chapters (completed)

One entry per line
Able
RidiBooks

Every day, a fox living in the mountains behind the imperial palace waited for the Emperor, who brought her delicious grapes and chicken thighs!

For the sake of her Majesty, who looked forlorn from loneliness, Esther prayed to God.

‘May His Majesty be happy.’

And as a result, Esther became a human..?

“I must be able to know how to kiss the one I love!”

“But that’s what being a human being entails!”

Esther had it all wrong.

“So you kissed me in my sleep without telling me?”

She had messed up again.

Caesar was definitely smiling… and he looked very happy… but why did something feel strange?

Her wild animal instincts were telling her that she was in danger.

‘You attacked me first, didn’t you?”

Caesar’s eyes glowed with a different kind of greed.

“You’ll never be able to escape me, Esther.”

The Symbiotic Relationship Between the Rabbit and the Black Panther (2)
1st Kiss Was Intentional (1)
Daddy, I Don’t Want to Marry! (1)
Rather Than The Son, I’ll Take The Father (1)
Don’t Concern Yourself With That Book (1)
My Husband Hides His Beauty (1)

These are recommendation lists which contains Tyrant and Fox. You should give them a visit if you're looking for similar novels to read. Alternatively, you can also create your own list.
More Lists >>>


Advertisements
Write a Review
No Reviews