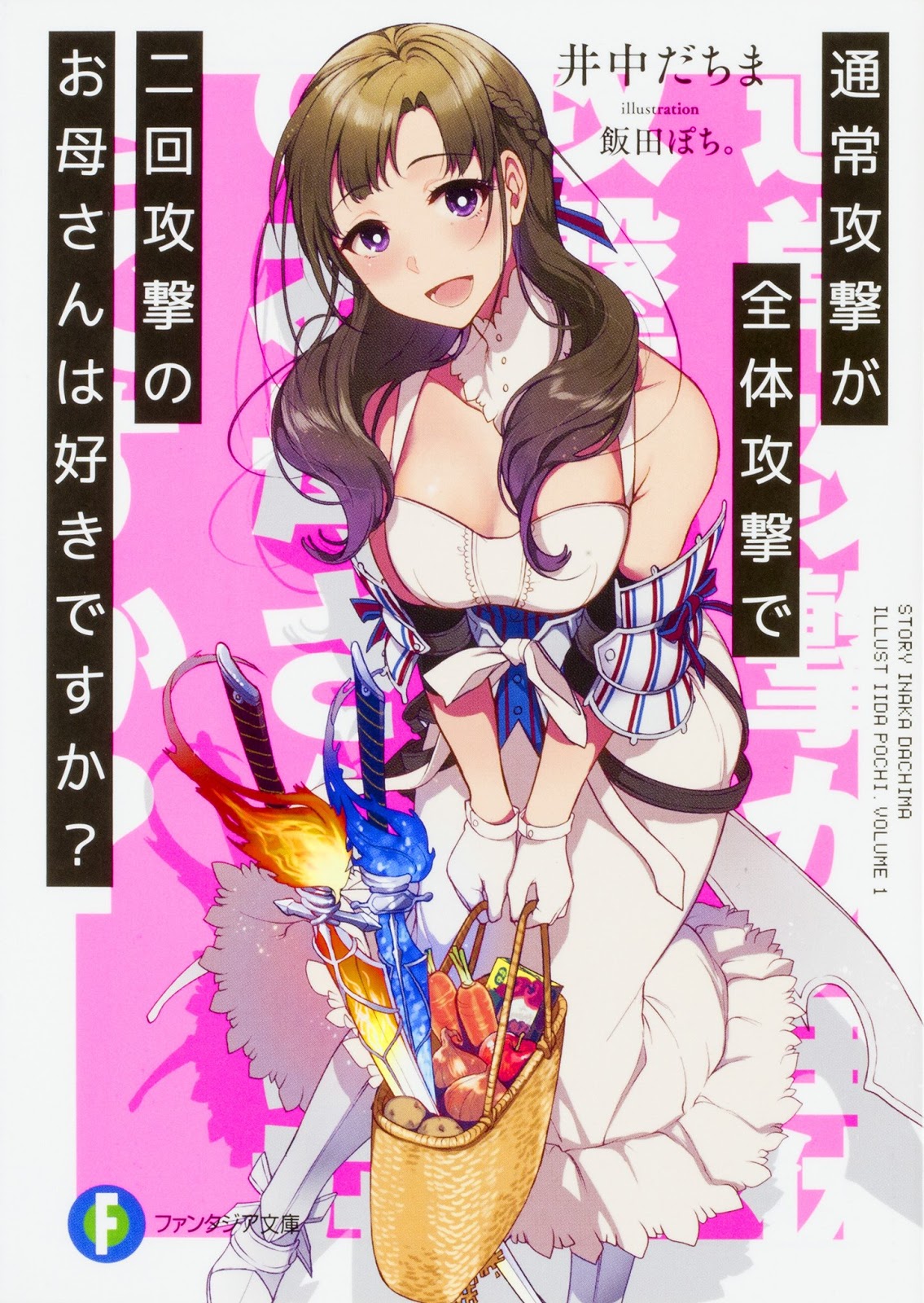 One entry per line
Inaka Dachima

One entry per line
Iida Pochi

Oosuki Masato is an ordinary high school boy who is magically transported to an alternative world, but for some reason his doting, over-protective mother comes along as well.

These are recommendation lists which contains Tsuujou Kougeki ga Zentai Kougeki de Ni-kai Kougeki no Okaa-san wa Suki desu ka?. You should give them a visit if you're looking for similar novels to read. Alternatively, you can also create your own list.
More Lists >>>

A breath of fresh air in the isekai genre, "Do You Like Your Mom?" tells the story of Masato, a teen embarrassed by his overbearing mother, Mamako. With their relationship decaying as Masato slowly drifts further away from his mother, day by day, Mamako takes the initiative to and gets them sent into a MMO world, in hopes that they'll be able to bond over the course of their journey. Even though there hasn't been an abundance of chapters out yet, from the sample translated so far, we can see conflict,... more>> comedy, and tension as the characters struggle, reconcile, and begin to adapt to their new environment. It's a piece with a great amount of potential and shows that not all isekai novels have to follow the same cookie-cutter formula. I give the novel a 10/10. One of the series I'm forward to the most. With Pochi as the artist, I have great hopes for this series. I believe this will be one of the finest pieces of literature I have ever read and may inspire me to improve my Japanese just to translate this series. <<less
20 Likes · Like Permalink | Report

This series is a seemingly novel idea but with bad execution. As a comedy the author is relying too much on slapsticks and puns instead of genuine funny situations. As a normal story the author just blazing through without caring to ground it with common sense, which if you don't completely shut your brain off you'll be wondering at a lot of nonsensical developments happening in the novel since it's not funny but plain weird. The characters are shallow with some forced moments, it's like they're just being forced to act... more>> in their role like in a soap drama. The titular mother is actually just your usual moe-archetype character labelled as mother, it's kind of jaring and feels extremely disturbing. The MC on the other hands, his role is to do tsukkomi but he managed to be even more annoying than the boke. The supporting characters are forgetable. <<less
19 Likes · Like Permalink | Report

I have read the translated light novel chapters and manga chapters. Most people who comment on it seem to love the mother, but I don't like her. She is an airhead sweet hot mom, which are usually endearing attributes, but this one can't understand his son at all and seems to want to reverse puberty and turn him back into a ten years old; she signed him into this "adventure" without his consent, without taking into account his desires or whatever plans he had; she withholds information and uses emotional manipulation... more>> to prevent him from resisting her or from interrogating her... She is literally holding him hostage; this game is like: "Love me as much as I demand, or else say goodbye to your normal life!" She hasn't even told him if they can die for real in the game, or if they are going to lose real years of life while in the game world (it seems that yes, they do...). If they spend too much time there, the son's studies can be negatively effected, permanently... They are Japanese, if the son is kept from school too long he won't be able to keep up with the crushing pace they are forced to assimilate contents, and that can prevent him from enrolling in a good university... If she really loved him, she either wouldn't put him in such situation, or, if she knows there won't be negative consequences (because death isn't permanent, and they won't lose real time while in the game) she should tell him from the beginning in order to allow him to enjoy the experience... I would like the novel way more if they had been summoned by some jerkass god or wizard, like in most other isekai... I dunno... maybe we are supposed to just laugh at the butt monkey son? <<less
9 Likes · Like Permalink | Report

I am Reviewing this for the sake of more Views. First of all don't be deceived, this is really good and clearly a 4-5 Star Novel. After reading "My moms became Son-Cons" You have no choice but to love this. Disturbing? Apparently you never read it! Yes, there are some flaws like no plot or a bit fast. But remember this is just based on 'Getting along with your moms'. Though I do feel really anxious that the Romance and Character Relationships will be rushed and have a forced ending... (You can never tell with JP and get axed.) It was still good enough to get a Manga, which makes me really happy since the Reader will be able to enjoy the Characters more. This is meant to be more of a fluffy comedy. Romance: I love it. It's not that rushed but gave a good start. So far they are just friends. *BroFist*
7 Likes · Like Permalink | Report

At first I was excited that a novel with such an interesting premise had been translated, but this is just..... mediocre. The world-building is weak, the characters are cliches, and there are no stakes or plot points strong enough to pull you into the story. Even looking at it as a parody-style story, the humor is forced and does not feel natural. The only positive I can say is.... the illustrations are really nice, and.... read this if you like mother-child related gags? The biggest thing that bugs me about this story... more>> is:
Spoiler

This is a virtual world type of isekai, but it's so badly explained. It tries to be practical and says that it was developed by the government, run on servers and NPCs have limited intelligence and whatnot, but the most glaring is this -- MC entered the virtual world by entering a http address and getting sucked into his computer screen. What? And yet, at this world seemingly created by a hybrid of magic and science, nobody bats an eye at this insane technology, nobody seems impressed by the world they were transported to, or questioned whether they would be able to go back.

So, yeah, badly explained world and characters that don't act according to common sense.

Not bad. In fact, this is interesting one. A story between mother-son relationship that go adventure together in world game. A story where the son actually not dislike his mother. Only kinda embarrassing when his party saw his mother spoil him in front of them (his party) and have intimate with her.... more>> And a story where the mother so much love her son. A story where the mother is The Mother who have much patience but always sad when her son upset with her. Also, a story where in the game, The Mothers always number one. Well, except, the evil one. Fumu. If I was tinking again. The son kinda have Dere personality, didn't he? <<less
4 Likes · Like Permalink | Report

The story is just a generic and cliche romcom. It's full of weird things that you shouldn't question for the sake of the plot. For example, how do you suck people into a game by opening a browser page? He gets locked up in the game till he gets along better with his mother, but what exactly is qualifies as getting along better? How can you actually do this and doesn't the guy still need to go to school? The other characters are weird too, and their actions make you... more>> wonder if they really are middleschool/highschool students. The jokes are really forced and standard too, nothing unique or new or even well executed that you would laugh about it. I also keep wondering what kind of mother who loves her son would do this kind of irresponsible thing to her child and hamper his school life. What kind of government says to a parent and child pair that it's ok to just skip school because playing around in a game takes prioirty? What about the father, why does he even exist? I feel bad for him. It's basically the normal ecchi romcom but now with your mother. The art is by leaps and bounds better than the story. And I bet that's what drew the attention of most of you. If you only want to indulge yourself in the art then you should look up the works of the illustrator of this series: "Pochi". I give it a 2.5/5 because it's not bad but not good either. <<less
0 Likes · Like Permalink | Report
Leave a Review (Guidelines)
You must be logged in to rate and post a review. Register an account to get started.