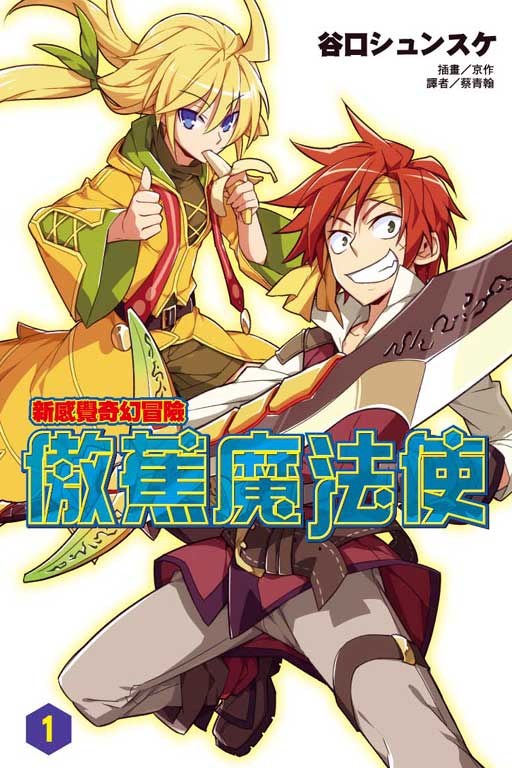 Status in Country of Origin. One entry per line
2 Volumes

The demon lord wanted to destroy all VEGES from the world! However, due to the demon lord’s own reasoning, the demon lord has decided to consider BANANAS as VEGES as well! The hero, a BANANA lover, cannot accept this, and arises to fight against the demon lord, wielding a BANANA blade bearing the brilliance like that of the sun. The legendary dragon, VEGETARIAN dragon, assists in his quest and they eventually won the demon lord. But due to the poor story, other people have passed down the unreal version of the story.

After much difficulties, they finally manage to reach the dungeon where the treasure of the legendary(VEGETARIAN) dragon is. However, they then found out that they have an extra companion, the demon lord himself tagging along! The guardian of the old and deceased (VEGETARIAN) dragon, a muscular man wearing only underwear, with the word “Dragon” on his head, acting all feminine was easily defeated. The protagonist then was approached by the Demon Lord to not fight, and he easily agrees(Hey, its just VEGES! And the protagonist hates VEGES too!!). However, his childhood friend asks one very important question…

“Are bananas also considered as a VEGE?”

And so, as we all can guess, the battle begins. Upon seeing his childhood friend get beated up, he then arises to fight against the demon lord, with his new awakened powers!! THE POWER OF BANANAS!! He then wields BANANA blade, BANANA armor, BANANA headband (Just image a guy wearing banana all over him), and with hatred to the original user of BANANA magic, he manages to fight against the demon lord of “Hatred for VEGES”. Upon winning, the demon lord made a declaration, “So long as there is still children/people hating VEGES, I will always come back”. So he replies “Every time you return, there will be heroes fighting you in the name of BANANAS!!”

These are recommendation lists which contains Tsundere Banana Mage. You should give them a visit if you're looking for similar novels to read. Alternatively, you can also create your own list.
N/A

Bananana banananaaa. There's only one chapter out, so you can't really judge much from this novel. But even from the first chapter you could already tell that there'll be a tsundere love interest that like to hit the perverted MC lol. All of that said, I don't think 18 0 votes is suitable for this novel. 2 or 3 might be more fitting, especially since the banana didn't appear in the story yet. Please give some time for the translator to translate more chapter before giving rating. Who knows, maybe this will... more>> be a good novel. <<less
2 Likes · Like Permalink | Report

I don't give a sh*t how good it is. I'm never gonna read it. It could be the worst book in the world for all I care. But it's about a banana-loving mage who fights with banana magic against a demon lord who seeks to destroy all veggies. Some beautiful human being took my third grade day dreams and made them a reality. That's a 5-star in my book. A book which could always use more banana mages.
1 Likes · Like Permalink | Report
Leave a Review (Guidelines)
You must be logged in to rate and post a review. Register an account to get started.

The Odyssey of Dalis