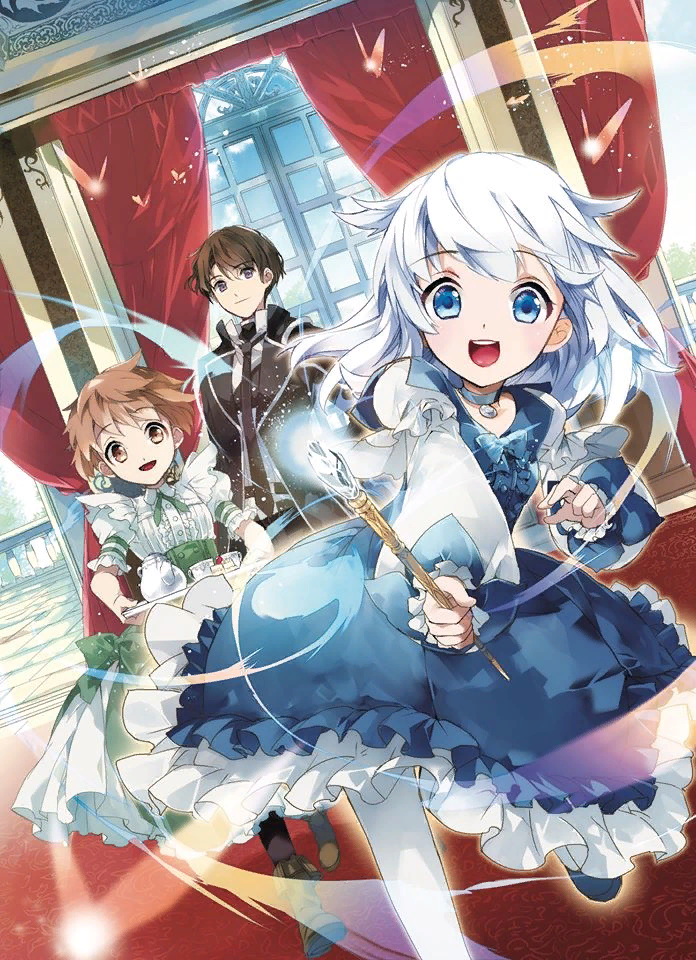 One entry per line
COMTA

Solon, who has been exiled by his comrades, met the secluded and lonely princess, Philia.

“I had met you once,” she said. She always believed his words that as long you got magic knowledge, you could be free.

With the request of his former instructor, Solon became an instructor for that girl. To protect the girl from assassins, they were sleeping together inside a room with a barrier.

They went everywhere together. From choosing magic staffs to fighting ghosts. With that, Philia’s training as a magician has started, but it looked like the main figure of the empire’s schemes was starting to move…

A magic swordsman who was despised because of his versatility and more so, his inferior skills, met with the uncommon princess.

These are recommendation lists which contains Tsuihou Sareta Bannou Mahou Kenshi wa, Koujou Denka no Shishou Tonaru. You should give them a visit if you're looking for similar novels to read. Alternatively, you can also create your own list.
More Lists >>>

Decent start, so far its the standard exiled adventurer turned tutor trope, the main thing to look out for is the interaction between characters in these types of novels, so rating is subject to change. P. S. The translator doesnt seem to be a native english speaker, so the sentences and grammar are choppy. Edit: 2/5 at c48 It's getting stale really fast, even as the story is going towards the climax of its first arc. A mix between the lower translation quality and the poor writing makes the character interactions feel lifeless,... more>> robotic even. It feels like Female: "L-E-T M-E H-U-G Y-O-U" MC: "H-A-H-A D-O-N'T D-O T-H-I-S K-I-N-D O-F T-H-I-N-G" rinse and repeat. As my initial comment says, the main pull of these types of stories is the interactions between the characters, and this story, at nearly 50 chapters fails to pull in much if not any interest in the characters for me. <<less
5 Likes · Like Permalink | Report

The princess is like a bull - she sees a red flag and runs at it no matter who gets in her way. This novel also turns a blind eye to age gaps - the MC is hit on by a 20-year old when he's 12 (an unreciprocated love interest that continues for 12 years until he's 24, how about that), as well as a 14, 17, and 20-year old when he's 24. Guess who the main love interest is? Yep, the girl with the biggest age gap of 10... more>> years who's about half the MC's age. I have no idea why the MC sees the 20-year old and 32-year old as "spoiled brats" while the 14-year old as "sexually attractive, " but it's a bit creepy to see a grown adult blushing furiously at a child's advances. Moreover, I think the princess is supposed to be a cheerful 14-year old, but her general lack of maturity and blatant flippancy about anything anyone else says makes her about as annoying as a 5-year old. The other characters aren't much better, TBH. The maid, Charlotte, is clearly intended to be a comic relief character, but she's weirdly sexualized in numerous places despite being only 17-years old. The other women, Sophia and Lucy, are actually the most charming of the bunch, with some places where they act their age, but they're often so obnoxiously spoiled that it ruins the idea that this is a romance novel about young adults. I can't credit the MC much either, since his personality is too lacking to really say much.
Spoiler
[collapse]
+1 star for the translation, 1/5 stars originally. The plot is decent but unoriginal, which isn't bad in itself but compounds with the unlikeability of the main cast. <<less
1 Likes · Like Permalink | Report

It's alright, the world and story isn't uninteresting but the writing shaves off the enjoyment factor. If I put it a nice way, the writing is to the point. If I'm giving my honest impressions? It just feels bland. There isn't much variation in the vocabulary and the dialogue feels stiff so it ends up giving off more of a 'report' vibe instead of a 'story' vibe. There isn't much time taken for descriptions either so the environments, characters and situations end up lacking in immersion. It's certainly not bad but... more>> there are much better titles to spend your time on. <<less
1 Likes · Like Permalink | Report

The girls are pushy and the main character tends to go along with it. Typical situation where the MC is a non-specialized fighter compared to his team, but is a logistics master and a well-rounded fighter that is necessary for a party to function well. As a result, his former hero team has difficulties succeeding when he is exiled from the team. Compared to others with similar premises, the main female love interest from the hero party actually leaves it to go to the MC. Dialogue is smooth in a sense, but the... more>> content isn’t particularly spectacular. It’s mainly just the female characters making assertions and the MC going along with it. Has some larger plot threads concerning the aristocracy, discrimination of social status and species, and somewhat interesting motivations for MC’s initial exile from the hero party. However, those are merely hinted. Majority of the story so far is rom-com fluff. Combat descriptions tend to be very utilitarian and not very imaginative. Minimally enjoyable, but not particularly exciting. <<less
1 Likes · Like Permalink | Report

This has turned out to be a pretty decent series - the usual harem tropes, but lots of unpleasant decisions to be made by the protagonist and some vaguely real-seeming danger to the lead characters. The translation is good but not inspired, and the translators are good about fixing mistakes that people identify.
1 Likes · Like Permalink | Report

This novels premise seems to be entirely taken from Banished from the Hero's Party, I Decided to Live a Quiet Life in the Countryside (Shin no Nakama ja Nai to Yūsha no Pātī o Oidasareta no de, Henkyō de Surō Raifu Suru Koto ni Shimashita). MC is exiled from the hero’s party due to party members saying he’s not adequately, lives with a princess in a slow life setting. It’s not a bad story, but feels more than slightly plagiarized if you’ve already read the other one.
0 Likes · Like Permalink | Report

Finished chapter 50 and the translater stopped the series. It is a little stale at times, but I like the story so far. As far as age gaps between MC and the girls, this isn't our world and western life. There are still arranged marriages in our world and also large gaps in ages, just in places like the USA as 24 year olds we won't get envolved with a 14-year-old (except the perverts) because we know better. This is a fantasy world so when reading the book remember that.... more>> The girls all like the MC but he hasn't made moves on any of them, he wants to protect all of them. Saint Sophia (20 y.o.) has been a friend for a long time, the princess (14 y.o.) is very straightforward and is the MC's student, the maid (17 y.o.) the
Spoiler

[collapse]
and the last girl (of current girls) is the MC's (former?) teacher. I hope someone picks up this series I would like to continue reading it as it was finally starting to pick up the pace. <<less
0 Likes · Like Permalink | Report
Advertisements
Leave a Review (Guidelines)
You must be logged in to rate and post a review. Register an account to get started.