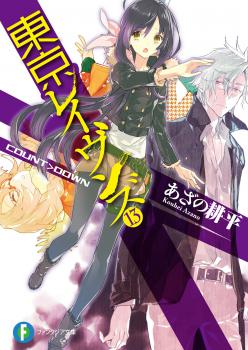 One entry per line
Azano Kouhei

One entry per line
Sumihei

Status in Country of Origin. One entry per line
16 Volumes (Ongoing)

Tsuchimikado Harutora was born into a prestigious Onmyoji family, but he can’t see “spirit energy”. Therefore, he’s been enjoying a peaceful daily life with his friends at an Onmyo branch school. One day, his childhood friend Tsuchimikado Natsume, heir to the head family, suddenly appears. Will this cause his destiny spring into motion!?

One entry per line
東京レイヴンズ

These are recommendation lists which contains Tokyo Ravens. You should give them a visit if you're looking for similar novels to read. Alternatively, you can also create your own list.
More Lists >>>

This novel is excellent and fun, the work behind all the onmyouji lore is detailed and used in a way that make the battles interesting and exciting!
8 Likes · Like Permalink | Report

I really like the story and setting, but as another reviewer pointed out, the characters suck so much enjoyment out of this story that it becomes hard to read. It's incredible infuriating to me that the female lead treats the MC like complete tr*sh when she was the reason he ever got involved in this entire mess. I also feel like she basically tricked the MC so that they would be together, but what is worse is that she tricked him into a relationship where the MC is suppose to completely... more>> obey her. How the heck could you make a person you love into someone who has to fight for you as a s*ave that is suppose to follow your orders and is suppose to never talk back, etc. Then, whenever the MC even tries to sticks up for himself when the female lead treats him like tr*sh, he ALWAYS ends up being in the "wrong" and other people even say he was in the "wrong". Why was he always in the wrong? The reason is is that female lead is worried about him so that makes it OK to treat him like a tr*sh s*ave. It's completely OK to call him an idiot when he knew absolutely nothing about the situation until recently, it's completely OK that she calls his friends useless, etc, etc. If this author was intentionally making me hate this female lead then I would give him full points because of how angry it made me, but no it's not like that at all. The author writes the MC as someone who just accepts everything, including being treated like tr*sh as long as it's by his female lead. If you can stand MCs being treated like complete tr*sh than this novel would most likely be amazing to you, but unfortunately I can't. <<less
6 Likes · Like Permalink | Report

I love this story, I've followed the manga for years and the light novel seems to be the exact same story this far. I don't however like many of the characters. Natsume, for example, isn't an entirely lovable character especially when things are really put into perspective.
Spoiler

I give her leeway on making Harutora promise to become her shikigami while they were children (she was taught this way by her family and probably expected Harutora to understand what she was asking of him since he should have been taught this as well). What I don't like is that fact that she created a shikigami to befriend Harutora, lived a double life with him, and used that shikigami's demise as a toll to bind Harutora to her. If it was just this I could be mollified but she's abusive on top of that. The storytelling plays it as humor but many of the scenarios don't warrant her to take such offense. Natsume constantly uses her status to order him around, ruins relationships she sees as a threat to her romantic pursuits, has beaten him because of misunderstandings (which is a trope I personally hate because these characters don't have the right), all the while establishing their relationship as childhood friends (sometimes just Onmyouji/shikigami) and then punishing him like a wronged girlfriend when he's in a situation she doesn't like.

[collapse]
don't get me wrong I still love this novel characters like her just rub me the wrong way.
4 Likes · Like Permalink | Report

After I had read this novel, I thought that it was fine like novel. Not better, but it pass. There no are many OP characters and they are no very broken. Moreover, the magic system is well worked; is not like usual Japanese Web novels, where the main characters use a simple and non-explained system without deepness. Easy to understand, the plot also can caught easily the attention, even though I must point that some battle scenes must have been better written and described. If I must rate it above... more>> 5 stars, I would rate it 4/5 stars. I recommend it to have a bit of fun <<less
2 Likes · Like Permalink | Report

The story itself is ok and the setting is good too, but what ruins it for me is that almost every single character in this story is s*upid. Honestly, the only reason the plot is progressing because of how s*upid and stubborn everyone is. I also really hate this MC because he is super flat character and the most s*upid of all. Really, this story can improve greatly by just making characters a little bit smarter. I also hate how this story treats death. There are multiple deaths and resurrections. It's... more>> like it doesn't really matter what happens at all if you die once. Second time might be last, or not. <<less
2 Likes · Like Permalink | Report

I remember I used to hide under my blanket with my old tiny screen phone in 2015 staying up late at night to read this (basically ruining my vision). This series was the first time I've read a light novel and Baka Tsuki translations was amazing. So there's a lot of nostalgia for this series but objectively speaking there's also a lot of boring repetitive story plot in it. Especially about the characters. They're fairly dull and only shine for a few moments after the flashbacks of their past. Also I... more>> really hate Natsume and how much she manipulates Harutora.
Spoiler

She basically forces him to become her Shikigami but she's so damn controlling and toxic that I can't actually root for their romance. She made a shiki and pretended to have a relationship with Harutora just so she could eventually make him her Shikigami. All of this is played for laughs but honestly Harutora doesn't deserve what's happening to him. I for one was happy when Natsune died.

[collapse]
This series really had an interesting background and if it had been used better could have been one of the best onmyoji themed series. This is basically a shonen-shoujo story. Characters are immature or too edgy (not cringe edgy but it becomes fairly predictable). The characters are the reason why this story is so boring. 2.5 stars rounded to 3 for translations <<less
1 Likes · Like Permalink | Report
Advertisements
Leave a Review (Guidelines)
You must be logged in to rate and post a review. Register an account to get started.

Reincarnated as a Dragon – The...

The Author Traveling The Multiverse With...
Advertisements