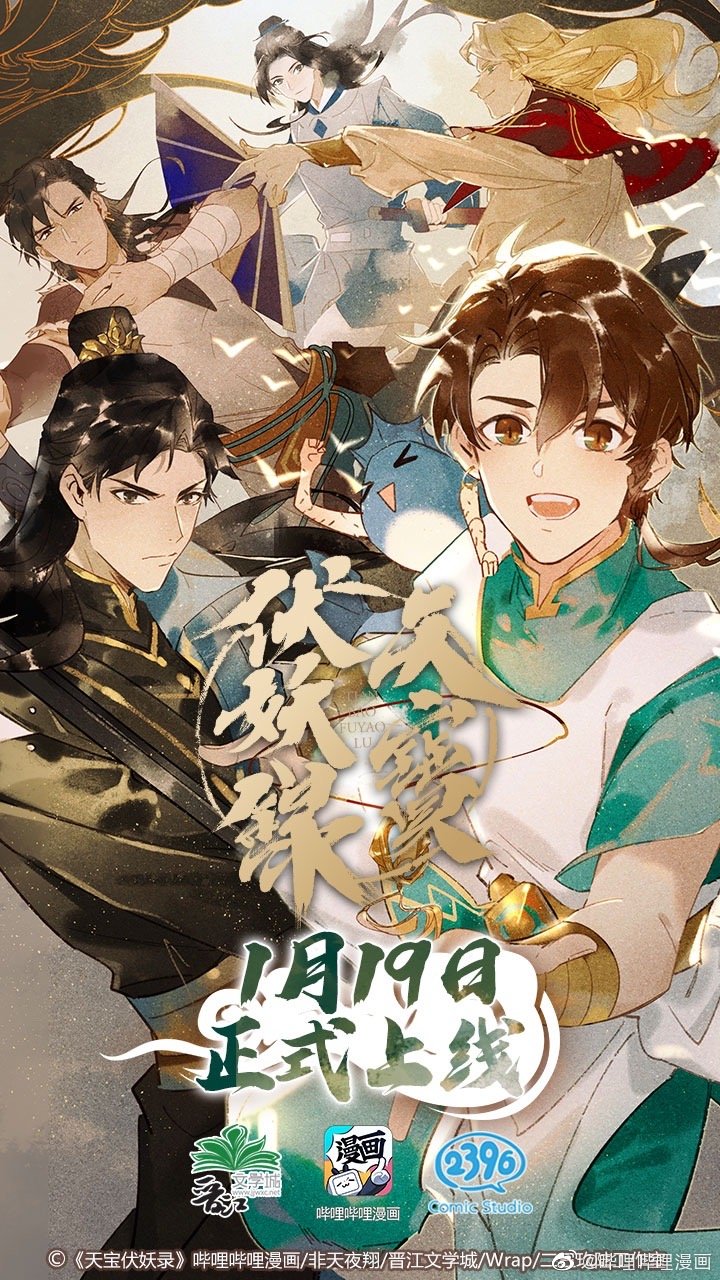 Status in Country of Origin. One entry per line
221 Chapters (Completed)

The phoenix led tens of thousands of birds as they flew over from the end of the horizon. Behind them, clouds akin to a sea of fire billowed as they swept by Chang’an. A golden winged roc perched on top of Xingqing Palace, its pupils reflecting the common people of the bustling Divine Land. Within the silence, dynasties rise and fall, while tides ebb and flow.

Li Jinglong slowly dragged his body riddled with wounds, releasing a resplendent light from his hand as he kept approaching Hong Jun.

“The living… are passing travelers…”

His low voice resounded through the world, and within an instant, the black fog that enveloped the earth receded before the light.

“The dead… return home without turning back.”

That light is the blazing sun that illuminates the world, stars that twinkle in the night sky, an eternal heart lamp that pierces through the darkness.

“The world…is a temporary inn. Since time immemorial, countless people have bewailed their short, bitter lives…”

Li Jinglong closed his eyes and pressed one hand against Hong Jun’s forehead. A white light diffused with a whoosh, covering the battlefield littered with mountains of corpses and seas of blood. Within the shadow of that lamp, the debauchery in Pingkang, the parasol trees of the Exorcism Department bathing in the midsummer sun, the sand and swirling snow in the vast expanse beyond the Great Wall, Ah Tai’s clear singing voice, Mo Rigen and Lu Xu picking leaves in the early morning, Qiu Yongsi’s flying brush strokes that transforms into immortal poems in Li Bai’s cup–

A young nobleman of Chang’an strolled through its eastern downtown,

Riding a white horse with a silver saddle as he beamed.

While traversing through Chang’an, flowers kept falling, where on earth is he going?

Smiling, he enters a tavern where a foreign entertainer performs.

(Last four lines are from a poem written by Li Bai used to ridicule hedonistic sons from rich families for their extravagant lifestyles.)

These are recommendation lists which contains Tianbao Fuyao Lu. You should give them a visit if you're looking for similar novels to read. Alternatively, you can also create your own list.
More Lists >>>

(Note: This review is subject to minor revisions later) “I have forgiven him a long time ago.” On a rainy night in Chang'an, fate conspires to collide a sword and a pendant, and with a blinding burst of light, the Heart Lamp finds its way into Li Jinglong, setting into motion a desperate wish from long ago... So here's a premise: A human man with the power of Heart leads a team made up of a half-yao, wolf gege, one campy Foreigner, an encyclopedic nerd and a fish with hairy legs... more>> in the effort to keep Chang'an from the clutches of yaos that want to take it over. The plot seems to follow up its kickstart with slapstick comedy, and promises team-building as its core, with a found family as a destination. It is not an adventure team-building slapstick comedy with the occasional historical fantasy plot points. If it is, I wouldn't be emotionally hungover 2 days after reading it. Tianbao Fuyao Lu is a historical fantasy with the energy of a 60 hours JRPG: first two hours you're descending a secluded mountain you call your home and deal with catching a cat as your first mission, at the end you're killing god. It builds a structure it calls a team with one brick missing, leaving something just off-kilter enough to be noticeable, yet not so bad that it all came falling apart-- and then it takes apart the structure and rebuilds it so it fits the number of bricks it'd been given. It's a story that leads you in with tropes and yet seeds discrepancies, and then it deconstructs, recontextualizes, reframes what it had laid out in Book 1. As someone who loves this kind of things, it is frankly a joy to see all the ways things break down and have to be rebuilt. Li Jinglong is shown time and again in the first 2 books as a reliable, visionary Leader, and yet you could see the hairline cracks that results from such a 'role': it stunts the team's overall growth, it isolates him. But then that trope falls apart like smashed pottery and in its ruins everyone finally finds their places and grow, and the house of cards finally is rebuilt as a sturdy, new home. And there is something beautiful about what this does to the main two leads, too. When we begin, Li Jinglong and Kong Hongjun feel firmly like they're designated ML and MC; Li Jinglong is in the position of power literally, figuratively, and all other -lys. But as circumstances break down, Li Jinglong's unraveling also gives Hongjun the push to self-actualize, and in his own way finds a place for his own voice as a leader next to Li Jinglong's, allowing for an endgame dynamic that feels less stagnant, more whole, more content. They fundamentally do not change. They just are open, honest and at peace with each other. After defying fate and nature itself, fighting again and again everything that seemed set in stone, that they started out typecasted and ended up comfortable in their own flawed skins felt a lot more meaningful. In a construction sense, I think it's worth it to briefly contrast Tianbao with Dinghai Fusheng Records. Dinghai Fusheng Records is a lot more straightforward as a story, with relatively static character roles and arcs, dealing little with personal growth and more on understanding between the two main leads. It is half Tianbao's length. It is also immensely enjoyable as a plot-driven story. Tianbao, on the other hand, might at first feel like an eclectic mix that only shows its layers halfway through, reveling in how characters are forced to grow when everything that brought them confidence are smashed into pieces. As such, despite being equally as plot-heavy-- it is a historical fantasy set on the brink of a historical rebellion-- half the meat on Tianbao's bone is in how the characters learn and adapt. Furthermore, Tianbao also deals a lot more with cause and effect; if you feel like Dinghai doesn't deal enough repercussions in tying up its loose ends, then Tianbao might give you more of that oomph. I really enjoyed Tianbao Fuyao Lu. I don't think it is particularly for everyone; the first two dozen or so chapters are somewhat emotionally agonizing to read, and I would know because I'm one of the translation's editors. But if what hurts you is how Li Jinglong is treated and how dysfunctional the team is, I have good news: this novel might actually be right for you. <<less
59 Likes · Like Permalink | Report
Leave a Review (Guidelines)
You must be logged in to rate and post a review. Register an account to get started.