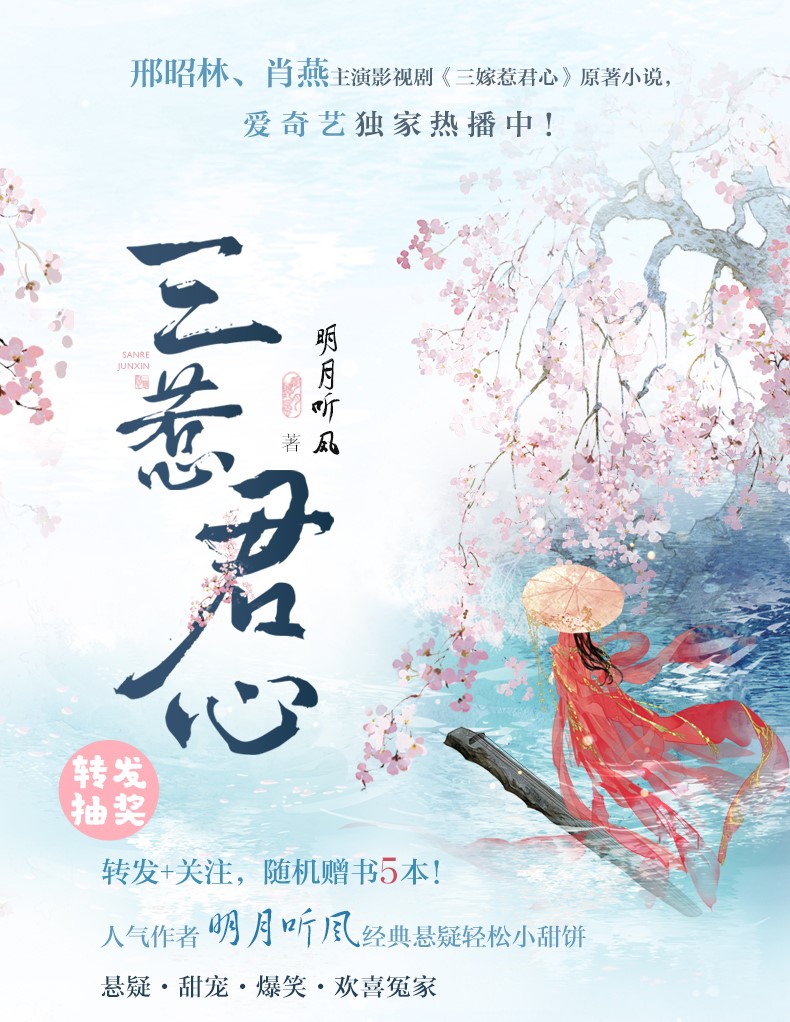 Status in Country of Origin. One entry per line
94 chapters (completed)

One is a blind girl, the embodiment of an orchid, intelligent with sophisticated grace, and the other, a young noble who loved his wealth as if it were his life.

His endless teasing, and her numerous counter-attacks,
She planned every advance with detail, and he met her with each step,
As he excitedly went about making life difficult for her, all she did was sigh at his childishness.

The uneasy-proud-young noble’s odd actions, contrasted against the calm plotting of an unfazed blind girl.

*Haih, one should never invite the attentions of a petty man…*

The two were at loggerheads from the very beginning, and to no one’s surprise, they soon saw each other as the enemy, and neither tried to understand the other’s position.

And thus it came to this,
as long as the Young Lady did not give in, then the Young Sir would not leave her in peace.

A blind girl thrice married, but to the same person every time.

But together forever after.

These are recommendation lists which contains Three Marriages. You should give them a visit if you're looking for similar novels to read. Alternatively, you can also create your own list.
More Lists >>>

The first marriage is because of some desperate situation on the FL's side, but their second and third marriage is because of their genuine love and affection for each other. I really like this couple a lot. Their beginning is not smooth. The ML was characterized as a petty and stingy man and he felt like the FL tricked him into spending some money to build awnings so he likes to play some tricks on her at first, and she retaliates silently. This really is not the best way to start a relationship, but thru this, he discovered how smart and interesting she is, and even though he played some tricks, she discovered that he is a trustworthy man and (she mentioned that although he stole her bamboo sticks, he never threw them away nor broke them and he returned them in one piece, he even kept some music sheets she sent him and he kept his promises with her).

The story revolves around their relationship and a murder mystery that happened before the FL lost her sight. This mystery basically cost them their marriage twice, but not because of any misunderstanding or loss of affection. She have an idea that somebody will create trouble for her because she was investigating the death of a fellow musician who was sentenced to death due to murder and she didn't want to involve his family, and the second marriage was broken because of the same case but the King divorced them to protect the ML's family.

The FL is really affectionate with the ML and the ML loves her very much. He is very stingy with but he married her extravagantly 3 times in the span of a year or so. He hated the guzheng but he learned to play for her, no concubines and he did not pressure her to stop seeking justice for the wronged musician, but only asked her to exercise caution and helped her seek justice.

[collapse]
I really couldn't wait for the translations so I read the MTL. This is such a good book. It's so sad that it's been passed around by different translation groups. I hope isohungry finishes this. I'd definitely read it again.
3 Likes · Like Permalink | Report

Impressions as of Ch.7. Part of Ming Yue Ting Feng’s “Ancient Doting Wife” series, the others being “Dragon Flies Phoenix Dances” and “Thawing Master Yan”; all of which are set in the same time period and features cameos of each other. I’m not sure if I should recommend this story. Though well-written and has an intriguing premise, some readers might find the male lead to be utterly despicable with little or no redeeming qualities (at least thus far in the translated chapters). I guess I can understand the translator if this... more>> is one reason for the slow updates. This is a story about Long Er, a handsome rich businessman and friend of the emperor. Despite his reputation as being stingy, greedy and petty; he remains the most eligible bachelor of the land. Countless noble young ladies yearn to marry him, and it is not helped by his own relatives who pester him to get married like his two other brothers. The female lead is the blind Ju Mu Er, a lady from a modest family. Though deprived of her sight, she remains a calm lady, kind to her friends and still living her life. Her disability did not diminish her intelligence or courage. You basically get the idea of the story from the synopsis, what it doesn’t tell you is just how annoying Long Er can be in the early chapters. His petty acts can be seen as downright harassment and he finds delight in tormenting the young miss. A reader might find his actions disconcerting as it involves causing stress and fear in a blind person. I do wish to read the rest of the story, as it also features the usual antagonistic young ladies that want the attention of Long Er for themselves, thus it would be inevitable to read about how the female lead would overcome such challenges. In other words, I want to read about how the blind Miss Ju turn the tables and hopefully, change Long Er from the woman-hater, money-loving person that he is. <<less
13 Likes · Like Permalink | Report

Initially, I dismissed this novel due to the reviews made saying that the ML is too violent against MC. However, after reading the whole novel, I found out that it isn't the case and this novel is a gem. First of all, the most inhumane thing the ML did was to serve the MC with fish with the bones still in it. All other antics are grade-school bullying made by boys who have crushes on the girls they bully. Don't get caught up with the bad reviews. I personally made an NU account... more>> to dispel your hesitation. Read this and you won't regret it. <<less
5 Likes · Like Permalink | Report

I regret having to come back to write a review on the official 15 chapters translated already but this story is so much more! Currently I'm on chapter 42 of the raw versions. The available translated chapters seem like a variation of "cold mister torments poor lovely girl - only she's blind" but the story is so much more than that! ML Long Er is spoiled but business minded. He doesn't like people tricking him so when evading the pack of "interested" ladies in his town, he runs into poor but talented... more>> guzheng musician Ju Mu Er, he assumes she's conning him into a relationship. When she helps him - but for a price - he's both offended and intrigued. Yes, he's a bit of an ass playing tricks on her and allowing more privileged girls to bother her but - he's not a bad guy. As he says later in the novel, "There's no money in it." While Ju Mu Er may seem meek and low key, her blindness doesn't keep her from making a living, teaching the local prostit**es guzheng (so they can improve their living) and solving mysteries. Basically she's meek because she's keeping her head down. Turns out, her blindness is a result of helping to solve the murder of a well known guzheng teacher who may have discovered an ancient martial arts manuscript. Bad guys are in town looking for clues and she doesn't want to be suspected. Her marriage to Long Er is indeed a surprise but necessary AND they have a close and physical relationship afterwards. No cold prince here! What is making this a fascinating novel is that the side characters - the servants, the stuck-up Miss Ding and Yun Qingzian, a local nobleman who wanted her as his concubine - grow and change and are all active parts of the story. I'm only halfway through the MTL-ed novel and it is already one of the best Chinese web novels I've read. Think of it as a combination of the slice-of-life of The Legend of Concubine’s Daughter Minglan with the crime solving of Bone Painting Coroner topped off with some high-level smootching. I also can't wait to solve the mystery of Ju Mu Er's blindness. Check it out - you won't regret it! <<less
4 Likes · Like Permalink | Report

Ju Mu Er is an awesome and capable heroine, and I like Long Er although I'm still waiting for him to redeem himself. His bullying of the MC doesn't really sit well with me, especially since she's blind. Awesome novel but I'm sad because of the infrequent updates.
3 Likes · Like Permalink | Report

Will write a more complete review when more chapters are out/when it's complete but a few observations: RE the FL's "sudden" desire to marry the ML: ... more>>
Spoiler

I would say that while it is sudden, it is not illogical, nor is it driven by some sudden up-springing of unrealistic love. She knows that if she doesn't marry someone post haste then she'll be forced by that Ding-whoever (Yun-whoever's wife) to marry her husband as a concubine which she really doesn't want to do. Given that the Ding family has a lot of power backing them up and the FL is just a commoner, the only way for her to avoid becoming a concubine is by marrying someone else. Given that the ML has come kind of relationship with her, and is conveniently single, it's not surprising she decided to chose to propose.

[collapse]
RE the bullying: tbh I don't think the author will ever address it. It is terrible (she's blind for goodness sake!) but the way it's written (jokingly) and the way the author puts jabs in about the ML's own actions points to there likely being no consequences. On the whole, given the way the FL decided to handle it this isn't the worst thing but it's... Overall it's not a reason not to read this story I don't think. In short: too few chapters to give a full review - no idea how the story is going to progress: will it be like Bone Painting Coroner with court/murder cases? Will it be more like Rebirth of an Abandoned Woman and be a back-yard drama? Either way, the writing style is fun, the characters are interesting and the ML's reactions to things are pretty hilarious (repeatedly running away from situations he doesn't want to be in using the same excuse so everyone knows that when he's suddenly "busy" or "something's come up" he just wants to escape lol). Minus the bullying, the leads have good chemistry, too. <<less
1 Likes · Like Permalink | Report

I can't remember when was the last time I laugh at the MC and ml's behaviour. I would say that ML is kind of childish and a bit going overboard with his action. Not only that, for MC to determine to marry him was kind of.... Sudden as there was no love between them besides a bit of bantering and argument. Overall it is a okay story to read
1 Likes · Like Permalink | Report
Advertisements
Leave a Review (Guidelines)
You must be logged in to rate and post a review. Register an account to get started.