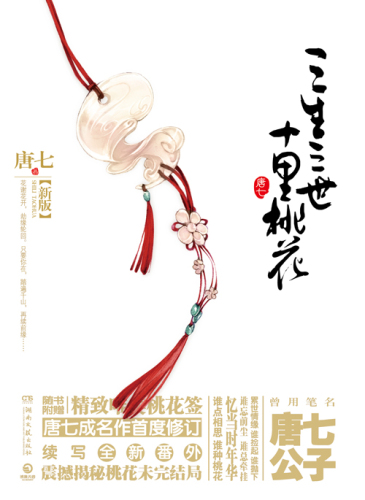 Status in Country of Origin. One entry per line
completed

One entry per line
Amazon Crossing

A woman stood on the Immortal Killing Terrace. Turning around, she jumped off without regret. A man standing by a bronze mirror witnessed her death with his own eyes.

Three hundred years later, in the East Sea Dragon Palace, she and he unexpectedly meet again.

Another lifetime, another world. Facing the man who betrayed her, she, indifferent as the wind, does not know why he is using his cold hands to stroke her eyes again and again.

Three lives, three worlds. She and he, is it their fate to bear this entangling love-line?

These are recommendation lists which contains Three Lives Three Worlds, Ten Miles of Peach Blossoms. You should give them a visit if you're looking for similar novels to read. Alternatively, you can also create your own list.
More Lists >>>

I'm giving a three star because of the translator's hard job, but as for the work, it does not deserve any stars. Not many of you might know that this work is a plegrism of another author's Yaoi novel named Peach Blossom Debt (桃花债) by Da Feng Gua Guo (大风刮过). Back then, PBD was a very famous novel among the Yaoi or BL community in China, and this author Tang Qi registered an account and started to write a romance novel taking the story of PBD and mimicking the writing style... more>> of its author Da Feng. A lot of Da Feng's readers thought and asked if she was Da Feng's side account for romance, and she had answered in a very misleading way tricking people to think so til Da Feng publicly announced that she knew nothing about this author Tang Qi. Then she finally admitted that she was a fan of Da Feng and that her work was merely paying respect to PBD. Later, there was evidence that she had opened many readers account to leave comments under PBD with score 0 that said PBD was similar to another novel -- Ten Miles Blossoms, which was her copied work of PBD. Then the age of web novel publication came. Due to the policy in China and the limited audience for BL novels comparing to Romance, PBD, as a BL novel, was unable to be published while Ten Miles welcomed its first edition. Tang Qi and her editor had sent a copy of their book to Da Feng asking why her work was not able to publish to show off. As her work got popular, she reverted and deleted all comments related to Da Feng and refused to admit that this work had any connection with PBD. It had been revised multiple times with several different editions to remove and rewrite all passages she had copied from PBD, till there is only the bareborn of the plot left in mixed orders. The author Tang Qi had been bothering and attacking Da Feng Gua Guo for many years now till today. She had just publicly criticized Da Feng for being a coward and not dare to sue her work despite that everyone knows how hard it is for this type of case to win especially when one side is an BL novels. Just want to make sure that people are aware of it. <<less
125 Likes · Like Permalink | Report

I don't know how to rate a plagiarized work. I first saw the manhua for this and later found this here with its summaries that even the translator got disappointed with the author about the alleged plagiarism from different authors. Although the original is BL, I really liked the story though when I figured that almost everything about this novel is plagiarized, I failed to appreciate the fake author's novel and got interested with the original one even it is a BL. aren't the author ashamed of what she's doing? Getting... more>> credits and properly paid for the works she had stolen from others? What is too bad for me that this story even got a manhua and movie and this fake author is well compensated. <<less
21 Likes · Like Permalink | Report

I read it. I did. The story is good but, guess what? It’s plagarized and it’s all someone else’s work. Horrible. I feel really bad for the original owner, please go check out their work! It’s a BL series called peach blossom debt. Plagarism is atrocious.
16 Likes · Like Permalink | Report

Knowing the backstory of this work, I can't recommend it to anyone. Plagiarism is theft and while good authors borrow and adapt ideas from each other's work all the time it's another thing to completely rip off someone else's hard work. No writer worth anything would steal from someone else and then double down by attempting to sabotage the person they stole from.
12 Likes · Like Permalink | Report

I thought this story was entertaining at first but then the more I read the more I became disappointed. ... more>>
Spoiler

So FL is supposed to be this super old deity that is queen of an entire land. Every time she gets into trouble ML is always there to rescue her. I mean that's an age old troupe but what annoyed me was that at one point the ML lost all his cultivation (energy?/power?), his body was weak and still healing, but he stood in the rain waiting for her until he was nearly dying. Well, she gets into a fight and he is able to jump in, hold her back, and finish the fight for her even though she wasn't injured or anything. It just undermines the FL. The writing made the FL feel extremely weak and was a huge disappointment. She came off at first as super strong and respected, but I felt like she never actually shows off her strength because she is always being saved so in the end, she was portrayed as useless.

Another dislike is that the son was one of the main reasons why the FL and ML met, but after some point the ML and FL had some issues and completely forgot about their son. The son was a turning point in the story, and after he was used as a plot device, he was thrown into the back of the closet and was lightly mentioned even though it was described how ML cared and loved his son dearly. *Shrugs*

Felt like the main villain (demon lord?) caused the main plot line to be side tracked because he was just here and there. You didn't particularly hate nor liked him, and honestly, I really couldn't care less about him. Su Jin is this deity in the heavens obsessed with the ML but it seemed like she was written in there to give the reader someone to hate. She could have had retribution and character development, but the author just wrote her off as some crazy person and got punished horribly for it, the end.

[collapse]
The story felt very unorganized with a random flash back that were chapters long. I preferred the way the live action drama told the story: in chronological order. <<less
10 Likes · Like Permalink | Report

The story is very good. It gave me a lot rofls and weeps... there are also some fluffiness... A must read for those who like romance. I'm not really into romance but end up liking it, this is how good the novel is. Multiple love interests and multiple love rivals.
The MC is a spoiled princess and irresponsible mother, she also show us how narrow-minded a woman can be.
The ML is a very likable cool prince.
The dough ehm... The son is a cute innocent round dough ehm... chubby... more>> kid. The previous reviewer tell us about it being plagiarism and there was conflict between writers. But c'mon, plagiarism is a common thing in CNs, you find it everywhere, I think 9/10 of CNs are plagiarism. you can just blame China for their piracy policy. As a CNs reader, I only care whether the story is good or not, enjoyable or not. It is said that this story is a ripoff of a Yaoi. I don't like BL/Yaoi, its a BIG NO for me, so I prefer this one and I appreciate what Tangqi Gongzi've done.
This story also adapted to a TV drama "Eternal Love" this year. To bad I can't watch it. <<less

There is a drama of this named ETERNAL LOVE. Just watch it. It's the best. I don't know why some people are saying it was plagiarism. Because it was made into a drama. If it was plagiarized would they have done that?? I don't know. But the drama is my favorite.
4 Likes · Like Permalink | Report

Still don’t like the story. I didn’t like the manhua and I barely finished the drama. I wanted to like this so bad, but I freaking hate long term misunderstandings.
4 Likes · Like Permalink | Report

What is plagiarized about this story? The writing, some unique names, and some scenes. Most people noted that this author copied the unique writing style of the BL author that wrote 'Peach Blossom Debt'. The BL author was really well-known in the BL community and so people notice right a way. People also noticed the author of this story was using names from the BL, for example Zhu Xian Terrance. However, names and writing style wasn't the only thing stolen, scenes were also copied. Remember that scene where YeHua went to... more>> the peach blossom garden and how a drunk BaiQian is there? There was a similar scene in the BL. It really sucks the author chose to plagiarize when all the above doesn't really affect the main storyline. The plot itself isn't copied and the things that were stolen from the BL author wasn't essential to the main story. P.S. I read the novel for this and I really didn't like it all that much. I don't know if its because things get lost in translation but I found the story to be rather lacklustre. The story is written with much to yearn for. It doesn't feel like the chapter is truly complete but rather a quick outline of what's to come. Is this a problem of writing style? Maybe but I also read the second book following Feng Jiu and found that equally lacking. <<less
2 Likes · Like Permalink | Report
Leave a Review (Guidelines)
You must be logged in to rate and post a review. Register an account to get started.

The Game of a Blood Mage