Novel Updates
RegisterLogin
Theme
Search
Your changes has been saved.
Advertisements
This Overlord Doesn’t Care About Anything

Home >
Novel >
This Overlord Doesn’t Care About Anything 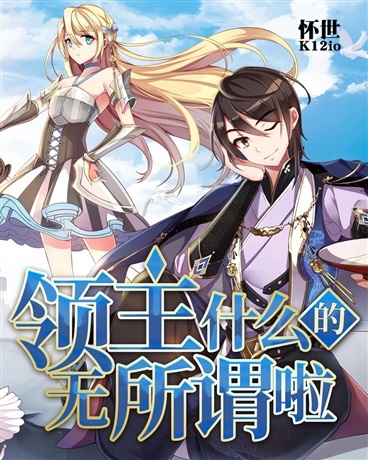 One entry per line
怀世

Status in Country of Origin. One entry per line
16 Volumes (Ongoing)
911 chapters (ongoing)

Big shock! The laziest Overlord in all of history, Li De, committed such outrageous acts in order to recruit some subordinates! The abandoned good-for-nothing female knight, the sorcerer with demon blood, the internal affairs officer with unclear sexuality, and the disabled strategist…

These people, who were all spurned by society, were all accepted by him, how ridiculous!

“Li De, you don’t even have an iota of the majesty of an Overlord, aren’t you afraid that you’ll be ridiculed by other people?”

These are recommendation lists which contains This Overlord Doesn’t Care About Anything. You should give them a visit if you're looking for similar novels to read. Alternatively, you can also create your own list.
More Lists >>>

This is an unexpectedly good read. One day, I was like: Hey Ralts, you should pick this, it's one of the most popular novel on SFACG this month and it is harem, just like how you like it. But when I started reading, I quickly got hooked by the story and keep wanting more, heck, I even subscribed to Ralts' patreon page just to get him to translate faster. There are moments in the story where it got really dark and gloomy but it was immediately washed off by the next... more>> chapter and filled me with a warm feeling. I would honestly recommend giving this a read. I might be biased, but this is my honest review. <<less
16 Likes · Like Permalink | Report

(even though ive read in the novel only 2vc3, I wanted some spoilers and since found none ive read the manga (88ch) which is like 12 volumes in webnovel) Overrated, wanted two give it to stars but it doesnt deserve. Imagine a world with people of 50iq and a protagonist with 60iq and it gives you this novel.... more>> The scheming is so dumb and the other characters cant think better than stones, plus many contradictions. Lets not forget the harem which is there for no reason except the tag, and the MC who flirt but dont touch.
Spoiler

[collapse]
The cherry on the top is:
Spoiler

that he cross-dress not once but twice and I think there is more to come which wasnt in the tag and I added, + he got a 'dude' in his 'harem' and he acts anbiguous with 'him'.

[collapse]
ngl re:library is known for trap/gender bender / crossdressing genres but they said this one is a harem but it was literally a trap for me. read at your own risk <<less
10 Likes · Like Permalink | Report

I kind of like the novel overall, but it's has some Japanese novel tropes that I just can't stand. For one, MC has really nice girls that like him, but instead he rejects them and goes to some whorehouse. It's just sad and kind of gross. Not to mention just incredibly annoying for reader. I really can't understand this particular thing and why it's so prevalent. While artwork was like Jp novels, I though it would better as it's actually CN novel. One more of these incidents or constant rejection by... more>> MC for absurd reasons and I'm out. <<less
9 Likes · Like Permalink | Report

Typical Chinese novel that is unoriginal. MC is extremely lazy yet strong which makes for a boring combination. Considering that it’s a Chinese novel then expect 95% of the characters to be ret*rded, wait that’s an insult towards people who are actually ret*rded since they are 10x smarter than people in this novel. I could go on and on but read it for yourself, you may like it but to me it belongs in the tr*sh pile with all the other Chinese novels.
4 Likes · Like Permalink | Report

If you've read the manga, reread the novel. The manhwa downplays most of the story and leaves out a lot. I think it's very nice, lazy reincarnator refuses to properly work, deciding to rely on the people around him to do the work. He comes off as a piece of shit, and like, I guess he is, but he genuinely cares for the people around him. Probably. In the end, it's just up to you to choose whether to read it. I'm just here to say: It's a good idea... more>> if you read it. <<less
2 Likes · Like Permalink | Report

Let me try to put it in words that avid readers of this kinds of stories can understand. Imagine Cale Henituse from "tr*sh of a Counts family" Now Imagine Roland from "Release that witch"... more>> Now take, the character of the One and compound it with the ingenuity of the Second. Then, sprinkle a bit of the cold heart of "Nidome no Yuusha". After that, plug in a super charger of blessings from being a reincarnator. This thing is our MC. Let's just say that the "Gary Stu" trope was created for such creatures. Then we're thrown into... "Total War: Three Kingdoms", with a demon faction mixed in for fun. When you're mixing, spill a bit of common Japanese harem tropes. Woops, not that much, now you're gonna have to add a dash of "Emotional obliviousness" too so that it devolves into "comedy" instead of pure "romance"... Because, isn't it fun that the MC doesn't chose ANYONE from the "Harem"?? *eye roll*. Ok, this is not fair, you know why he doesn't look at them in that way, it may not be outright said but it's inferred from his actions and way of doing things...
Spoiler

He sees them as his siblings, things to be protected, not taken advantage of, he doesn't see them as women... it's incredibly weird because he actually respects them and wants them to grow but he's going against the nature of the world, one adores him, the other idolizes him, he can't see them as potential partners because he knows it would be unfair for them... he sees himself as an "outlier" of the world because he's a reincarnator and he's not a scumbag that would take advantage of it for that purpose... you can clearly see this the way he "thinks" about them, he's incredibly rude but just as with Cale, he's an unreliable narrator.

[collapse]
Well... you know the Drill, that's your basic premise. That being said, the story is very fun!, the worldbuilding is awesome, the pacing is great, the characterizations are hilarious, the comedy has hit for me every instance (even if it's eye rolling it managed to get a chuckle) but well, I know that comedy is subjective. The story haves a sh*t load of potential and I am enjoying it greatly, JUST, be AWARE that he's not a reliable narrator, he "Thinks" one way but if you actually read what he is doing, you "KNOW" his justification is BS... Just like Cale. <<less
2 Likes · Like Permalink | Report
Advertisements
Leave a Review (Guidelines)
You must be logged in to rate and post a review. Register an account to get started.

It doesn't matter if I am...
Advertisements