Novel Updates
RegisterLogin
Theme
Search
Your changes has been saved.
Advertisements
The Way to Protect the Female Lead’s Older Brother 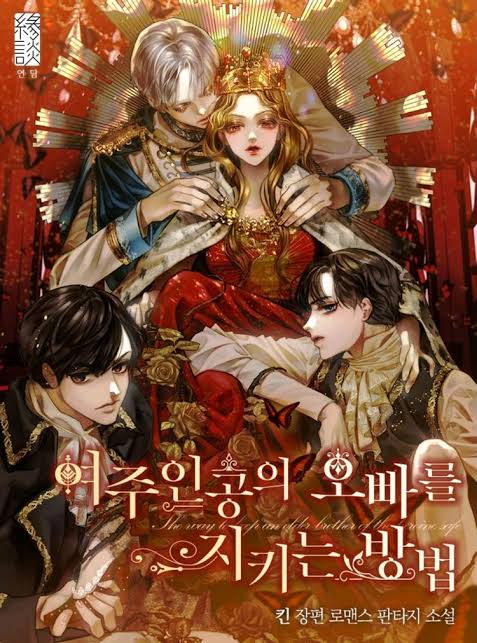 One entry per line
Kin
킨

Status in Country of Origin. One entry per line
1

I accidentally took possession of someone in a 19+ reverse harem novel.

The problem is that I became Roxana Agriche, the older sister of the sub-villain. My damn father kidnapped the heroine’s brother. Now, is the only thing left to meet a terrible end from the vengeance of the heroine?

But what if I can avoid that horrible development?

“I’ll protect you until you can get out of here safely.”

The heroine’s brother, Cassis Pedalian, will definitely be able to pay me back later.

I’ll Change The Fate Of Being Executed (2)
A Villainess For The Tyrant (2)
Chronicles of the Kilner Family (2)
Daddy, I Don’t Want to Marry! (2)
I Adopted A Villainous Dad (2)
Light and Shadow (2)

These are recommendation lists which contains The Way to Protect the Female Lead’s Older Brother. You should give them a visit if you're looking for similar novels to read. Alternatively, you can also create your own list.
More Lists >>>

So far, the best I have read in 2021. The female MC, Roxana Agriche is one hell of a splendid villainess queen. She rocks! The plot is very good. I really like the flow of the story and the resolution of the scenarios. Furthermore, the ML is a perfect fit for her. *Sighs in bliss* On the other hand, there's a manhwa for this. The art is so legit, I can't help simping for everyone. Hoho I am glad this has already have an English translation. Thank you Translator-nim!
24 Likes · Like Permalink | Report

I had my issues with the last arc, but I really liked the side stories and the first 2/3 of the story, so 5 it is. As always, i'll give my complete thoughts in the story with hidden spoilers (for those who didn't read them on the forum spoiler threads). About the portrayal of the characters psychology... Spoiler up to chapter 25 (on the webtoon) ... more>>
Spoiler

I got to know this story through the webtoon. And its the first time I have to say that this aspect was better exposed in the drawings than in the writting, since here we can see much more of the inner monologue of the characters, and yet it was still well done.

I'll just talk about the most vivid example, Roxanna, our MC. She is a woman that in the beginning of the story shows the many facets of her character. She IS an Agriche, nevermind she had a previous life, she was molded into the beautiful and strong woman we see. She is someone who unconsciously lives as a manipulative and ruthless character but that tries to keep the goodness of her heart from her previous world. She became hardened by her environment and can only show her feelings in a distorted way, but her contradiction attracts the many characters around her - be it her brothers, Cassis or the other guys in her life.

You can see it clearly when Cassis is first held a captive and she often thinks about saving him... of course, in the she often says its because of 'survival', but the destructive way she is living and her lack of overall care about her own well-being makes the reader wonder "just how reliable is this narrator"? You can see how much she despises what she became, and how hellbent she is into doing 'something', which is not survival, but destroying everythind Land Agriche constructed. She's in for vengeance, but this vengeance is not so "blood-boiling" as we normally see around us. This is a carefully planned vengeance, an apex predator eyeing his prey carefully. Roxanne tolerates no failures.

She likes to talk about earning Cassis trust, while instead of making him trust her she is trying to instill dominance and show who is the boss in their relationship. She puts him into dangerous situations just so he would feel helpless and depend on her... (anyway, we all know that her plans don't go very well, and Cassis ends up softening to the weaknesses she lets out in front of him).

The girl that got nauseous only by reading a book as dark as "Hell's flower" is now a woman who doesn't flinch in the face of madness. Her new life has changed her, forever.

[collapse]
What I like about characters in the story (this spoiler goes beyond webtoon chapter 25...)
Spoiler

And you can see, a character can be judged as bad in a scene and good in the next scene. Its just a matter of perspective and situation. The only reason why Land Agriche (Roxanna's father) is seen as a total evil bastard, its because he has no principles. He's a dark whole that destroys everything around him. Even Mary or the other Agriche children are depicted in the gray area despite their weird hobbies.

Cassis Pendelian, the judge, was also not completely good - he is so murderous and over-the-edge for anything that tries to grab Roxanna's attention from him, but he is ofc excellent at repressing himself, a lesson from his childhood. (His relationship with Roxanna, from the POV of a person in a healthy relationship with their partner is very problematic. But this doesn't change my ship, I really like their scenes together).

[collapse]
About the romance - I DON'T GET THE SHOUJO TAG!!!
Spoiler

I think it bloomed quite well, for such setting. And when they got hot with each other... damn, it was like a bomb going 'boom' and they didn't stop xD;

They were not very descriptive, but we are gifted with dialogues and meaningful actions between them. They test each other's boundaries and they try to possess each other in all aspects of their lives. They both represent to each other, something they lacked previously in their lives. Cassis and Roxanna pair is a more extreme case of bad boy x good girl, except that the roles are reversed. And yes, good boys are extremely attracted to bad girls in rl life too. haha.

[collapse]
About the Agriche brothers.
Spoiler

All in all Dion, Jeremy and Asil (when Nyx appears) are developed in the story. And we get some of the background and childhood for those 3 with Roxanna.

Her relationship with Jeremy and Dion also being warped, from before she knew she was in the novel and acted normally, and after she knew what her family was and that she was in a novel. (In special with Dion, there's several SSs about that).

I didn't feel bad about Nyx when he had his ending. The dead are dead, we must learn to let them go. And so they did it.

But... I felt a bit bad for Dion. He was a character that is the representation of a person living everyday in the coldest of winters, but one day tastes a single day of spring. And since them, he has been living his life as if trying to taste this experience again... but unfortunately there's only winter. - Nevetheless, he has some development, some of his thoughts and struggles are brought each time he appears and when Sierra decides to save him and let go of her hatred. And yes, I pity him too Sierra.

[collapse]
Anyways, I recommend the read. Don't read in one seat, since it is impossible.... if you never dug deeply into the gray areas of "good" and "bad", you should read each chapter without judging, but by logically thinking about each character's action, thoughts and dialogues and how do they fit together, and from what perspective are they coming from. And don't expect a scene where the hero saves the beauty, cuz here the beauties are their own heroes. Yey to Roxie and Grizelda (my lovely Griz). <<less
22 Likes · Like Permalink | Report

I am so surprised that I really liked this. But then again she's a badass lady
This is another isekai shoujo, and she is reborn in the most psychopathic family in history, where the most evil child wins the favor of his father.
Roxana is amazing, she has a gray moral character, her end goal is supposed to be good, but there are so many things that could go wrong. The environment she grew up in has obviously changed her for the worse, but I really want to know what... more>> decisions she will make and which path she will choose. <<less

These Heels Step Heavenward – A...

The Heavens System Subsidiary (I Was...
Advertisements