Novel Updates
RegisterLogin
Theme
Search
Your changes has been saved.
Advertisements
The Tale of the Ghost Eyes

Home >
Novel >
The Tale of the Ghost Eyes 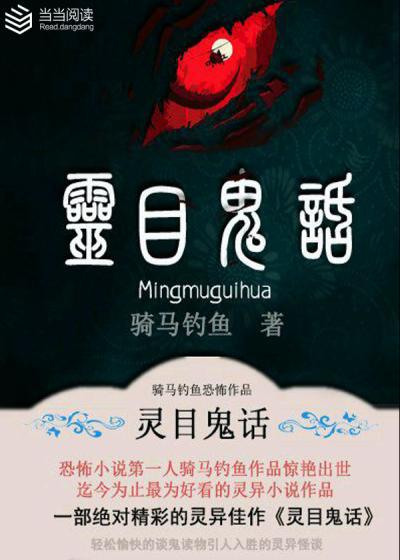 One entry per line
骑马钓鱼

Status in Country of Origin. One entry per line
560 Chapters (Ongoing)

A Taoist master must visit a village to fight off the hauntings and killings that have taken hold of the village. The powerful master learns of a young boy that has gained the ability to see ghosts and takes his role in the young boy’s destiny. Join the adventure of the Taoist master and the boy with the ghost eyes.

One entry per line
灵目鬼话

These are recommendation lists which contains The Tale of the Ghost Eyes. You should give them a visit if you're looking for similar novels to read. Alternatively, you can also create your own list.
More Lists >>>

NICE STORY I LOVE THIS STORY no OP, MC is a 6 yo child (at the first chapter). and (hopefully) become adult and can cope with his gift. ... more>> a refreshing story in the middle of game related horror novel. I really hope this novel is translated UPDATE, translator mejee sama, I cannot open the web. everytime I click the chapter, I will go to the intended chapter then promptly go to home site. after that I canot open the chapter.... HELP UPDATE... thx for the mass release... realy enjoy this novel <<less
9 Likes · Like Permalink | Report

I'm all caught up and craving more! I was recommended this story on a thread I started, asking for a novel with Chinese culture and ghosts, boy am I grateful. The story follows a 6 year old boy who was granted the ability to see ghosts, spirits, and other supernatural phenomenon. A Taoist master (who is a super kind hearted and wise man, love that dude) takes this boy under his wing to fight ghosts and set them to rest. I go from getting chills, to getting heartwarming feelings at the... more>> innocence of the kids and the character development of the people in the story. I'm really excited to see where this is going, thanks @Meejeenovels for this gem! =) <<less
6 Likes · Like Permalink | Report

This is first horror story I've read that actually repeatedly gave me goosebumps. So far, the story has been set in the 90's. It follows a young boy with "supernatural eyes" which allows him to see things that others can't. This doesn't just mean he can see ghosts, there are many other supernatural creatures in this world. If you want a good read, I 100% recommend this book.
6 Likes · Like Permalink | Report

An interesting novel with good story outline and nice integration of Chinese culture, especially Taoism. But as it can be seen that my praise for it doesn't match with the rating that I have given. The reasons are: 1) MC is a super annoying character. His childhood personalities are so annoying and undisciplined that it makes me question his way of upbringing considering in Chinese society where cultures are very strict. Most of the readers would think of it otherwise with the excuse of him being a child but I can... more>> hardly do that as I have read the whole novel. This annoying personality of his doesn't go away even when he steps into adulthood. It actually curbs after 400ish chapter but the whole novel ends at 560th chapter. So basically I had to endure whilst not smashing my phone. 2) Although this novel has good outline but its absolutely inconsistent with the gradual flow of the writing. One example, The novel's name is "A tale of ghost eyes" which gives idea to one that MC might have some supernatural power in his eyes. It's true as in the description it's written that he opens the "ability to see ghost" but later this ability seems to be very common for those who can harness nature's power like Taoist, witches, Buddhists etc. Then where's the problem one might ask? Well for first 150 chapters author gave the kid MC an irreplaceable position of spotting ghosts to the "experts" around him. This feeling also got stationed in me as a reader but after that it seems that every person who dabble in supernatural can acquire this power. No, more like it comes to them automatically. So here I can't help but feel annoyed as the author broke his own "rule". All those important position the MC held in the hearts of those experts are nothing but joke. Even in the end his eyes aren't that special as author wanted it to be. 3) Oh! Here comes the most common hypocritic line in Chinese novel which I can't help but point it out.
Spoiler

MC'S godfather tells MC to solve a ghost which is hiding in his body whereas MC wants to keep it inside him. Godfather further warns him that his practice speed might fall where MC replies to him that he doesn't want fast speed but wants to do it slowly so that his "path" stays firm. You know it's one of those proud chinese lines in wuxia novels. The funniest thing is around 300ish chapter or so MC gets involved in a dangerous case and has gotten his ass whooped by ghosts. He then laments of his bad luck and slow progress and then breaks into bawling like a twerp in front of his girlfriend. I wouldn't have remembered this if I hadn't read the whole stuff in one day. This made me laugh at the author's inability to write stable characters and plots.

[collapse]
4) This is the point where I am very unhappy with this novel as well as with most "modern day" tagged chinese novels. The mc's attitude towards strangers is very disappointing. It's true that first impression is important while talking to unfamiliar people but here mc's take on socializing has made me question his ability on the most common social norm. It is apparent that MC wants people to be subservient of him while speaking. If a person is humble to him then MC would talk to him but if a person is arrogant then MC would also act alike. This makes me question the commonsense of Chinese author (s). These strangers don't owe him anything yet he wants the same personality template for everyone. The author has unknowingly incorporated his unsociable behaviour in his creation. Yes, it's "unsociable" because that's not how humans interact with one another. Everyone is different. The idea of being humble to the MC and flattering him is bringing out the hidden narcissistic side of MC which can be found in the author as well. Another one is the lack of respect for other people. MC was teamed with a Buddhist monk who was kinda fat and like every Chinese novels MC, our MC started to take jabs at him for his appearance. It would have been fine for one or two fat related jokes yet I couldn't help but notice the lack of respect for others in mc's tone in multiple occasion although the author tried to pass it as small jokes. I kinda got angry at this point, heck, even Harry showed a little respect for Dobbie and didn't treat him like everyone. It's visible that author tried to draw amusement by treating others like crap. 5) MC is super s*upid as well as super lucky. I feel like without "special attention from author" the whole novel would've been finished by 250 chapter. MC is supposed to grow up by dealing with supernaturals in both power and as a human being but he keeps getting s*upid and his actions bring inconvenience to others. This shows the author's inability to write character development. Also sometimes author messes things up while writing mc's ghost enemies. Enemies taking time to kill off the MC, low powered enemy using "miraculous" skills yet still gets beaten etc etc. It's a mess! 6) As always the TERRIBLE ENDING! Author literally got tired of writing and gave up the book. Things were actually getting well but he stopped writing. There are many many more plot holes in the novel that I feel like if I try to mention, I will go crazy. All in all, it's a good one for those who wants to stay occupied but beware of getting a drop in IQ! <<less
5 Likes · Like Permalink | Report

Amazing horror novel. The first case was the scariest, it give a goosebump to the end of it case. Well early ghost cases began when his godfather around it almost make me disappointed toward the novel, fortunately it began to change when he grown up, where the MC handling the ghost without the help of his godfather, but surprisingly the next ghost/zombie (or chinese vampir) cases not really scary but the excitement for this not faded instead it keep up. The MC itself matured by the time his grown up but... more>> sometime I couldn't help but to hate him when he was a kid, luckily his personality change too (well he's a good kid if tou ignoring his thought to bully the ghost child in first chap which he didn't do bc their move the child up to better environments and better poeple) N about the ghosts almost all of the ghost the MC encountered not the bad ones. N surprisingly the number dead people who dies by the ghosts less than 20 (this is the the ghosts who've been MC encountered so far) <<less
3 Likes · Like Permalink | Report

The story is splendid, at first reading without concentrating, you wouldn't feel anything as the texts appear simple as if you're reading some book or a newspaper, but!!! Once you concentrate and imagine the story unfolds before you, you get goosebumps and hold you breath like you're the one experiencing this event along with the characters. I like how Xiao Yong describes his past, sometimes you forget that he's telling the story of his life, but living this moment. Experiencing these events, how he discovered he can see ghosts, and that... more>> moment when a ghost knows he can sees him. Praying to god nothing happens to him, everything but not to die. I also like how he describe his feelings, thoughts, analysis of the moment when an event occur, how other characters interact with him or others. How he uses some phrases when he's child to describe things, like
Spoiler

"Mom punished me for being so foolish with the wood ash. Fortunately, the skin on my butt was thick. I could still walk and play after that beating."

[collapse]
Those little things add charm to the story. It's totally acceptable there will be some lines you know a child won't think of that to say, because Shi Yong is describing his past, so he would use some mature phrasing. (I'm not sure if the author thinks of this or it's accidental) I get heartbroken when he says that he regrets doing something in that moment (of his past), or something he didn't understand back then, some even when he's older. Or when they says his life isn't long due to his eyes. I don't know but sometimes this novel got me think how human life is so fickle, by using butterfly effect, your life totally change until the moment you die, and after. There's something charsmatic or charming to this novel that got me hooked to it, from the very first chapter till now, always. Sometimes it reminds me of Ghost Hunt, sometimes of Natsume Yuujinchou. <<less
1 Likes · Like Permalink | Report
Leave a Review (Guidelines)
You must be logged in to rate and post a review. Register an account to get started.

I am an Eggplant [BL]
Advertisements