Novel Updates
RegisterLogin
Theme
Search
Your changes has been saved.
Advertisements
The Summoner is Going

Home >
Novel >
The Summoner is Going 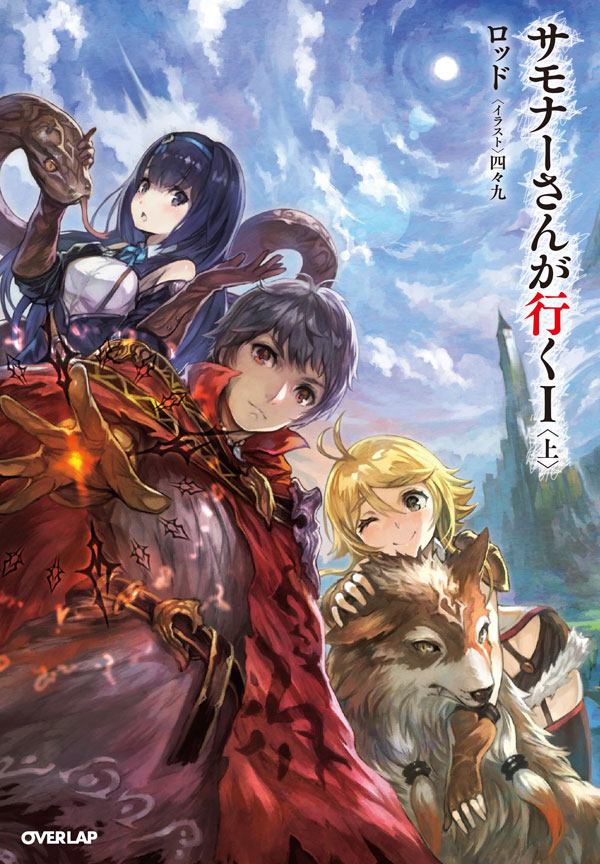 One entry per line
ロッド

I went into rehabilitation.

Would you skip the tutorial when playing a new game?

I had a strong inclination to do so.

After the Beta test phase ended, the main character joined the MMORPG during its Public Release.

He likes to go with the flow and enjoy playing the game. This is a story of his adventures.

These are recommendation lists which contains The Summoner is Going. You should give them a visit if you're looking for similar novels to read. Alternatively, you can also create your own list.
More Lists >>>

(at chapter 5) The protagonist is offensively s*upid.
... more>>
Spoiler

He picked the first class he saw. Then he decided to focus on melee when he was playing a spell caster and strength was his worst stat. He found a teacher for his class, but decides to pick his skills before getting any input whatsoever, even though up to that point he wanted to wait for suggestions before picking skills. It isn't on the level of being a bad player anymore... There's got to be some mental damage somewhere. And he's gotten worse every chapter.

The reason it's so annoying to me is, this is the kind of novel where you know the protagonist's dumb decisions will turn out to be amazing because the author gives him the right equipment at the right time and has sprinkled hidden skills and quests throughout the story that just happen to make the dumb decisions turn out all right. And then everyone will praise him because of how good he is.

Rant aside, the translation's good enough. It's slice of life, so there's no story to judge. The characters aside from the protagonist so far aren't bad, but aren't great either. The setting (game only) is okay, though there's nothing that sets it apart from other VRMMO games. If it weren't for the protagonist being hell-bent on making the worst choices possible, I'd probably rate it a 3 and call it a forgettable novel that's good for wasting time if you like slice of life VRMMOs. As it is, I'd only recommend it for people desperate for the genre somehow, or bored out of their minds.

Edit as of chapter 109: I got bored out of my mind and saw an update here, so I got to reading. And I must say, my mind hasn't changed. There's still no storyline, that's expected. The setting's still OK though the more I learn about the skill system the less I like it in general, not just how the protagonist uses it. The protagonist getting a high level NPC to baby sit him for a long time makes things more boring than usual slice of life VRMMO game novels, and he continues to be offensively s*upid. My rating and recommendation to avoid it stands, and I won't be coming back even if I get bored.

First of all, this is one of those novels that either you will like it or you won't like it, so if you don't end up like the novel it's ok, just be aware that it doesn't mean that the novel itself is bad. Now to my review, reading this reminds me a lot to my times playing MMORPGs. There is no end goal (so far) for the game, and there is a lot of freedom to do what players can do in the game so the story is mostly about... more>> what the MC does during his gameplay (there are no scenes that happen in the real life, just the game), what makes the story interesting is that it will leave you wondering what will happen next like what will he summon next, what kind of map will he explore next, what kind of bosses will appear, how will the summoned monster change, etc. The bulletin board chapters are also quite funny and it really feels like a game forum with everyone saying whatever is on their mind. Regarding the MC, he is the player that will just what interest him at his own pace (which is the equivalent of a hardcore gamer lol) so all his actions are dictated with what he would like to do next, also he is not "OP" in the unfair meaning, since it's technically possible for everyone to be as strong as him, it is just that it almost impossible to be able to match him considering that his average playtime is of 18h daily (no, it's no a joke), so as the story progres the gap between him and the rest of the players will become bigger, but even for him there will be battles and events that will be impossible for him to solo so he will still pair up with players from time to time. He also doesn't have plot armor that makes him win every battle since even him will die sometimes due to some mistakes like any other player. Something to note is the MC has no experience playing MMO in the past, so he doesn't know about a lot of MMO terms and will also from time to time take actions that will leave you thinking "Why would you do that!?" or "No!, don't do that!" for example but when you stop for a moment to think about it, these are the kind of mistakes a first-timer of MMO would make. And finally for those wondering, there is no romance so far from what I have read, which makes sence since it would be weird to have romance in a online game even if it is a VRMMO, but if anything happen I will edit my review (I doubt it though). <<less
20 Likes · Like Permalink | Report

Can already tell it’s gonna be one of those, weak willed MC forced to do whatever the female character says routine. Was pretty interesting too until they randomly and suddenly introduce 5 attractive female character at once.
20 Likes · Like Permalink | Report

It is a VRMMO that really makes you want to throw your keyboard. :D There is no real life explanation or connection ever mentioned again, when at one times it mentioned about his childhood friend (girl). The MC is immortal in means that other people logout to lunch or dinner and he never mentioned logout for lunch, dinner, go to bathroom and so on.... more>> It is only login (wake up and after breakfast?) -> midnight -> logout (sleep). Did our MC a rich guy or what? He didn't work, didn't go to school, or a NEET? I even suspect that he is a critical patient that can't move his body anymore, that's why he login all day.
Spoiler

All the story in this novel is about :

5. Get more title in the progress

11 - 100. Just keeps levelling all the skills, monster and level by fighting, fighting, and fighting more monster.

100-1000 still levelling non-stop except to get new equipment

By the way, in ch.500 MC already 20 level higher than other player, not to mention already got 2 dragon while the other don't have any, have unlimited supply of HP and MP potion where he stole from his master.

And already fighting more than 10.000 enemies or is it even already reach 100.000, I never count but if in 1 chapter you can fight from morning to midnight with each batch contain either 5 or 10 or even 20 for boss and only with minutes. It's no doubt his kill count already reach that far.

Do you like novels about playing a MMORPG? And ones where there isn't much else but playing the MMORPG? Yes? Then this novel is right up your alley, 10/10 No? Then this novel will bore you 1/10... more>> Partly? Then this novel will interest you but you will probably do a fast forward (this is where I am). The good thing is that the game system is pretty consistent and the MC isn't OP to the max. He's OP but not invincible (yet). The reason he is OP is due to his insane amounts of play time, his class allowing him to solo and his capabilities in combat. Overall this is great for a pure VR MMORPG story but its hard to get out of its niche <<less
5 Likes · Like Permalink | Report

Pretty obvious this is the sort of story you like, or you don't. Read up to chapter 15 ish and see if you like it. I used to enjoy this sort of thing alot but I stopped reading novels for a while and I guess my taste changed when I started reading this again. So I guess 3 stars?
2 Likes · Like Permalink | Report

I don't know if the MC's name (Keith) was decided by the author or westernized by the translator but either way it bugs the hell out of me so I guess I might never make it past c5 in this particular novel. Other than that there's a lot of stream of consciousness narration and grinding, which I am usually ok with but I just can't get into this story. I like gaming novels and am a little disappointed that this one misses the mark for me.
1 Likes · Like Permalink | Report

Enjoyable enough for me to binge read the story in one go. Not great, but somehow pretty fun. MC is clearly not a reliable narrator, but his stream-of-conciousness and his logic is quite interesting to read. To those commenters dissing the MC for his s*upidity, I'll just say that the MC is playing the game he likes to play it. For a hobby, that's what's most important, after all.... more>> The MC is fully cognizant that he's not playing his class the way it should be played. But he's having fun. It's definitely better than the MCs of some vrmmo stories who do s*upid things while insisting that they've found some kind of loophole and getting praised for it by everyone around them. Everyone around our MC admits and admires his strength, but fully recognise that he's nuts to do what he does. There's no irrational praise here. Translation up to chapter 120 and after chapter 170 is pretty good. In between that is either chinglish or mtl crap. It's been edited to conform to proper grammar, but it reads like the machine-generated text created by some of those experimental AI. <<less
1 Likes · Like Permalink | Report

Story lacks depth, it's just run of the mill daily grind with nothing going on, with zero character or plot development.
1 Likes · Like Permalink | Report

My impression after chap 6.. Please just create a story about isekai... This story is complete weird for worlbuilding.. The problem of story with this game background is the attachment of real world and the feedback of NPC AI... About NPC AI usually you create a comment about the unusuality AI and their real human feedback and about real world attachment is important because its a game about story not an isekai. So for anyone who think like me better find another story..
1 Likes · Like Permalink | Report
Advertisements
Leave a Review (Guidelines)
You must be logged in to rate and post a review. Register an account to get started.