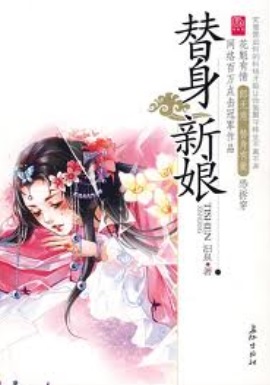 Status in Country of Origin. One entry per line
208 Chapters (Completed)

One entry per line
长征出版社

Everything begins with love.

In order to help her sister escape a marriage without love, Long Mo Er willingly puts on her wedding dress and gets married on her behalf. After serving her purpose, she thought she’d be able to pull herself out of that mess. Never would she expect herself to fall in love with the groom and the bride groom with her, the substitute bride.

One entry per line
替身新娘

These are recommendation lists which contains The Substitute Bride. You should give them a visit if you're looking for similar novels to read. Alternatively, you can also create your own list.
More Lists >>>

It was quite an enjoyable read until a certain incident happened and I honestly can’t continue reading it. ... more>>
Spoiler

She is a kind girl so she helped that masked guy. Okay fine. But how could she didn’t let ye family or even anybody else knows where she went? Even worse, Ye Che’s sister was injured while looking for her. And she pawned the hairpin given by her mother in law to pay medication fee for the masked guy. (Even tho she promised to come back later to get it back.)

Idk but for me but it’s just unrealistic how she went so far to help someone she just met twice. Maybe the author really pushing the idea of her being a kindhearted and gentle lady :/

And all these happened right after the shock she got after meeting Fei Yan (Ye Che’s fave courtesan). Making everyone suspecting Fei Yan for her disappearance.

[collapse]
Probably will read again but for now I will leave it. <<less
21 Likes · Like Permalink | Report

I feel a bit bad for the translators by writing this review. After all, it's after reading their translation that I was convinced to finish reading the raw.
... more>>
Spoiler

The romance and feeling between the couple develops quickly and doesn't really change throughout the story. Much of everything that happens is due to the MC not truly understanding the male leads feeling and the fact that the male lead didn't expose his feeling for her until afterwards.

In terms of the incident that the other reviewers wrote about: it wasn't the greatest thing ever, but it wasn't completely horrible. She was trying to put her relationship with the male lead to the test, while happened to rescue someone she looked up to. She has a simple and innocent personality, so everything is not that well thought out. At least you should expect her to, given how she's written.

The novel isn't exactly going to impress you with how descriptive and vivid it was written, but it wasn't bad for say. The story is written with very short chapters, and is not very long in total. Therefore, the pace is very quick and the writing is very simple.

Well, lets just say if I want to describe this story, I would say that is the unfinished. Major events like the sister goes missing happens and at some point the story just completely ignores it and the ending doesn't follow up on any of that. It's pretty random really.

The author obvious started out with a pretty good idea, but didn't have everything planned out. Therefore, at some point, she just didn't know how to follow up on what she's written and just decided to end it.

Introduction I have an analytical mind that loves picking apart stories into their parts before reading it as a whole. Although I have genres and styles I lean towards, I am fairly capable of unbiased reviewing (at least, up to a certain point - there will always be some bias, but I try to keep most of it out). Since I am reading a translation, I am only reviewing up to c150 and only the translations, not the original text). Summary As an avid reader that will never put down even... more>> questionable stories, I am very impressed by this story's lack of reality. The characters are flat as an ironing board in both personality and description. The story settings is almost nonexistent with the exception of certain points. The plot is as deep as the Mariana's Trench, replacing the seawater with hydrochloric acid (you cannot even get to it). There is simply no coherence to it at all and it's not "It's China". There are many Chinese Novels that are excellent (though there also those the make me feel as though females like myself would live a life worse than death in those stories. That's not the point.). I feel as though this story is being murdered from the inside out. It could have been very well made but it has been butchered. The Protagonist Not only does the lacklustre female protagonist come out clueless and inhuman to the point of disaster, she is also a melting pot of confusion that even a child cannot replicate. I would say she is extremely sheltered and naive, but that just doesn't describe the feeling I get from her. What I feel from this character is "Inept". The literary background that the character comes from seems to have lost its meaning. Even though the family only showed the protagonist the beautiful side of life, the character herself is pretty much dying of surrealism. Although this is a fictional character based in a historical fantasy, at least give the characters some sort of reality IN that world. There was a moment in which the main character showed a serious, intelligent side of her, it amounted to almost nothing when the plot takes a concusssive grenade to the face thrown by Fei Yan. Settings and World Building There's almost no memorable settings at all. Other than the "pivotal" moments that describe the area, trying to be vivid in the imagery but missing the point, the story seems to rely on your own imagination to create the world. There is pretty much nothing to say here because I cannot find myself any setting whatsoever to critique. Plot and Storyline Someone, please tell me there is a plot involved. I cannot find it. The plot slips around an office building, jumps into a disco party, charges into an orchestral symphony, hops into a street fight, then walks back home, looking like someone else. After 150 chapters of jumping rope, the story still does not find herself a rising action boyfriend. Almost 30 chapters of the story was wasted after Fei Yan showed up. It was like this character was meant to signal the end to all logical thought processes and dive into the Land of Oz while bad tripping on drugs. --- --- --- Well, this is all I have so far. I will see if the story gets better later on. <<less
9 Likes · Like Permalink | Report

I agree with Mintzu about this novel. It was going ok up til that point and I felt there was plenty of things she could've done instead of that =_=;.... pretty much dropped it from this point on. Kindhearted ok... but being so 'kind' to the point of your brain being shorted and doing the most probable worse course of action is another thing altogether.
Spoiler

She could've shouted for more people to help instead of doggedly dragging him herself to who knows where to get treated.

Just 10 chapters are enough for me decided to stop reading. The characters: like other novels, almost all of them are handsome, beautiful, and etc bla bla... And it made me think that the author had forced their developments as if she wanted to finish this story as soon as possible. The plot : as I said before, the development is too fast. Conflict araised too fast and solved too fast. Everything is too fast...... more>> The world setting : that's actually okay. But still too shallow. Don't have a good foundation. Overall : Dont like it. Read only if you have too much leisure times. <<less
1 Likes · Like Permalink | Report

It really looks like a promising romance novel where she substitutes for her sister. The best part is that the male lead doesn't abuse her and there's none of the forced misunderstandings like in some other novels. Unfortunately, the translation sucks. From the get-go it's very noticeably either totally machine-translated or just poorly edited afterwards. I tried to get through it, but by chapter 4 it loses its enjoyment because I have to re-read sentences over and over to understand them. It's a headache. Unless you're cool with broken English, bad... more>> grammar and confusing (or plain wrong) words and adding your own context to it, skip this one until it's edited better. <<less
1 Likes · Like Permalink | Report

The plot was quite interesting. As I read the summary and the first chapters I was thinking of a FL who is strong, mischievious, independant and funny. And because she took her sister identity, that she's on her guards against the Ye's familly and her husband. However from up to now, she already transformed into a girl in love (two/three days after her wedding) : How and why? Because he's handsome? Because he's her husband? Because he likes to spend his nights far from her and mostly with prostit**es? Because he... more>> insulted her (/her family) in their first conversation? Oh maybe because the other family members are nice to her? I can't get into the story because of the gap between what I thought before I started this novel and the actual novel. It's not bad in itself... (¬_¬) I was waiting for the ML to slowly fall in love with her strong and unusual temperament, and the FL with recurrent interactions they would have together but they just fell in love too quickly and the wife became shy, inarticulate, doing a bit (/lot) of s*upid actions, lunatic... So I need the deception to pass before trying again. <<less
0 Likes · Like Permalink | Report
Advertisements
Leave a Review (Guidelines)
You must be logged in to rate and post a review. Register an account to get started.

Help! Our healer is a Necromancer!