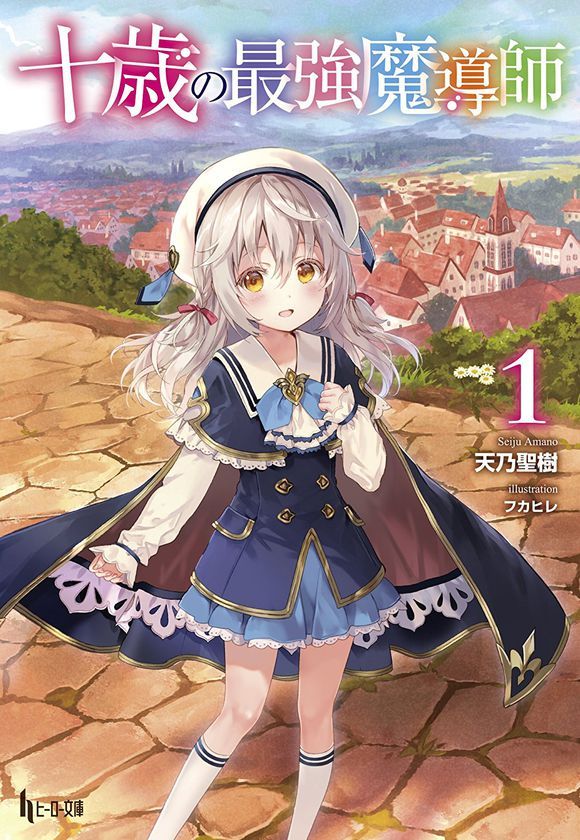 A ten year old girl named Ferris was working at a magic stone mine as a s*ave.

However, she was found to have an astonishing amount of magical power which almost seemed unlimited, and will enroll into a magic academy.

She is watched over by different kinds of people and her talent increases with tremendous speed.

Every political power was moving in order to obtain her power.

Ferris was the only person who did not know she was an amazing magician.

Ferris was satisfied as long as she could eat plenty of rice everyday.

One entry per line
Juu Sai no Saikyou Madoushi
十歳の最強魔導師

These are recommendation lists which contains The Strongest Ten Year Old Magician. You should give them a visit if you're looking for similar novels to read. Alternatively, you can also create your own list.
More Lists >>>

Hmm... as far as I read, it trully doesn't deserves that 1 star. Makes me wonder what's the criteria of their judgement (personal feeling against the translator, maybe?) From the currently translated chapter, it mainly about a s*ave (from birth) who ran away from his master who treated her badly. She, who didn't know she had been mistreated, decided to flee to sought a better life. She stumbled upon an aristocrat young lady and save her from predicament. The young lady, touched by the miserable life of her savior, swore... more>> to return the favor by supporting her in her new life. I won't say this novel is magnificent, superb, or whatsoever. It's just a normal story; I won't be surprised if someone gives it a 3 star. But 1 star star is a bit..... too much, don't you think?
So I'll just give it a 5 star to balance it, though truthfully the score I want to give is, at most, 4 star... <<less

This series have similar vibe with Kenshi o Mezashite in which it's a story focused on over-powered young female protagonist with her female companions doing adventures and slice of life fluffy things. Even though initially it seems dark, most of time it's fluffy story. Sometimes the author dropped hints of greater plot behind it in between of the fluffy chapters, so maybe the plot will proceed a little bit slow. The MC is a rather gullible and adorable child with poor background that's becoming the centre of attention with her cuteness.... more>> Unfortunately the author haven't use her background for anything important yet other than to make her looks pitiful and incites protective feelings to her. The supporting characters are using the usual Japanese moe archetypes, they're fine but maybe lacking distinctive features. PS. This only applied for the WN version since the author changed the story dramatically for the LN version, perhaps with more polished plot and story. <<less
10 Likes · Like Permalink | Report

While not high quality stuff, this novel really is enjoyable. Looking at the amount of unexplained 1 star ratings this story got (12/44 at the time of writing this) I think what turns people off is the way this story starts off.
Spoiler

The story begins with MC still working in the mine as a s*ave, she never knew anything else but the life she lived and as a result she sees the obviously bad treatment she receives as a matter of course. This is something her masters probably cultivated further, resulting in the mentality we see at the start (although that last part is mostly a guess).

Her perception of reality changes however, when she overhears a conversation that makes her realise that she is only a tool to them, no one there cares for what matters to her, they see her as a working animal. Although it feels a bit forced to have her suddenly realise it and immediately plan her escape.

She then proceeds to attempt escape and succeeds based on her latent magical powers, here she encounters a noble being kidnapped and almost accidentally succeeds in saving her.

[collapse]
The things inside the spoiler tag are a somewhat summary of what happens up until the end of chapter 3. I since at the time I am writing this only up until chapter 4 part 2 is translated, I don't know how this story will continue. My guess is that it will for the most part become a somewhat fluffy story. I personally find it entertaining enough to read, but it is far from a masterpiece or high quality as far I can tell.
4 Likes · Like Permalink | Report

The mere fact that it's now translated by 'fans translations' means I'm not gonna read it. I hate that site, what with them cutting the chapters into tiny parts in order to increase ad impressions, ruining the immersion of the novel
2 Likes · Like Permalink | Report

Those 12 that vote 1 star must only be able to see 1 potential of how the story goes. I think this story may be going according to the direction the 1 star are saying, the MC got swallowed by her power and doing what she likes or being used by the people around her seeing that the first 2 chapters indicates that. But now, after reading 4 full chapter and seeing the cover for the novel, this might become a heart warming story of a little girl trying to grow... more>> up to be a normal girl, despite being a s*ave since birth and possessing power that might destroy an entire country and how her surroundings are trying to teach her to live normally while protecting her from those who are trying to use her for their own greed. I do believe this will proceeds towards the heartwarming type like Uchi no Musume, with trouble to be solve here and there. But then, these are my only my impression of the story after only seeing 4 full chapters... <<less
2 Likes · Like Permalink | Report

So far, this novel is magnificent. The MC was a mine s*ave with abusive masters who somehow managed to escape after she learned that her master only saw her as something to use then throw away once she becomes useless. During her escape, she helped a noble daughter and the story basically started for real from there. The appeal is that except for her massive magic power, the MC herself was actually just an adorable, pure and kind-hearted girl who is satisfied if she can eat her fill. Hell, the scene... more>> where she tasted "real food" for the first time was enough to make the reader (me) wanted to hug her. All in all, this novel certainly doesn't warrant those 1 stars <<less
2 Likes · Like Permalink | Report

Starts out interesting but then it became a generic shoujo-ai isekai pretty fast, the MC back story is pointless as it didn't have any effect on the rest of the story. Personally, it only interesting until she got adopted.
0 Likes · Like Permalink | Report

This review will contain some spoilers, so read at your own discretion. The story starts out with a sad premise. The MC is a s*ave girl who works in a magic stone mine, and it generally treated poorly. However she flees from the mine and saves a noble later. The noble then rewards the MC and they later join the Royal Magic Academy. Up to here the noble and her father discovered her super talent at magic, hence the reason to join the Academy. And apparently she's some sort of super... more>> genius, despite she's never studied before in her life, and has lived her whole life as a s*ave working in a magic stone mine, yet no one questions this further than called her a genius... Well so far it was good and fluffy, but around chapter 15 the author presents the readers with a really interesting plot twist. He then proceeds to thoroughly burn the plot twist, bury it and dance on its grave. The MC had a chance to regain some sealed memories of her previous life. She would know who she really was, and gain a ton of power. But she's too scared to know the truth and refused to get her memories back, just because she saw some scary images and her familiars encouraged her to kill/subjugate humanity. I get this is a pretty solid argument, but she's by no means obligated to do so. The familiars even told her they can't go against her will, so she doesn't really have anything to be afraid of for the future. She could just get her memories back and decide not to become a dictator/monster, but nevertheless, she refused to get her memories back. And she even forgot she even had this conversation after she had the conversation, so she doesn't even have any way to reflect on whether or not it was the right choice. In my opinion the author missed a solid and really interesting plot twist here, just to potentially build up some future plot twist which could have worked perfectly at this time anyway. It just feels like a cheap way to lengthen the story to me, but maybe that's just my opinion. If the author really wanted to lengthen the story, then he shouldn't have mentioned this plot twist to begin with until much later when the MC was more mature. Heck the story even said the MC was by no means dumb, and always analyses her surroundings, but apparently she forgot to analyse her surroundings at that time...
Anyway, so far that's my opinion on the story. If the future brings something interesting I'll give my opinion again at that time. TLDR; The story starts out tragic, but quickly becomes fluffy and cute. The MC was a s*ave, but fled from s*avery, and later saved a noble due to coincidence. This fateful encounter leads to the MC gaining a friend, and eventually joining the Royal Magic Academy. She becomes a super genius at magic, and slowly becomes friends with her class. Pretty good so far, but then the author presented an interesting plot twist which he then proceeded to burn, bury and lastly danced on its grave, just to lengthen the story. If the author wanted to lengthen the story, then he shouldn't have mentioned the plot twist to begin with until much later. So the story starts out pretty interesting, but goes downhill around chapter 15. If the future brings something interesting I'll give my opinion again at that time. So far I'll give it 3/5, as the general story is okay, and I don't think only one problem should drag my rating all the way down, but I really dislike when authors present interesting plot twists, just to throw them away right away without good reason. Sure, it might leads to future plot twists, but there's no reason we should need to wait, as the plot twist would have worked well at that time, but maybe I'm just being pissed. <<less

Tales from Another World

When I saved a stranger girl...