Novel Updates
RegisterLogin
Theme
Search
Your changes has been saved.
The Strongest Dull Prince’s Secret Battle for the Throne 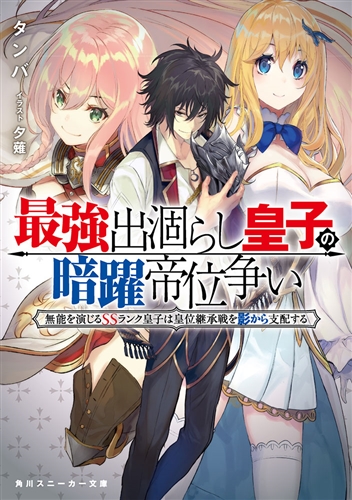 One entry per line
Tamba
タンバ

Status in Country of Origin. One entry per line
267 chapters (Ongoing)

The Adrasia empire on the Vogel continent. There is a battle over the throne of such an empire that possesses powerful military and vast territory.

With the successor undecided, the children of the emperor are vying to expand their power. However, there was one prince that everyone says will definitely not become the emperor.

The seventh prince, Arnold Lakes Adler. The young man who was inferior to his younger twin brother in every way, the dull prince.

Incompetent and lethargic, Arnold wastes everyday just playing around. However, behind the scenes, he is one of the only five SS-Class adventurers called ‘Silver’.

This is the tale of absurd secret manoeuvres of the prince who is uninterested in the title of the emperor.

One entry per line
Saikyou Degarashi Ouji no An’yaku Teii Arasoi Munou wo Enjiru SS Rank Ouji wa Koui Keishou-sen wo Kage kara Shihai Suru
The Strongest Dull Prince Secret Battle For The Throne. ～I Con’t Care About The Throne But Since I Don’t Want to Die, I Think I Will Make My Little Brother The Emperor～
最強出涸らし皇子の暗躍帝位争い ～帝位に興味ないですが、死ぬのは嫌なので弟を皇帝にしようと思います～

He Didn’t Want to Be the Center of Attention, Hence, after Defeating the Demon Lord, He Became Guild Master (WN) (1)
Sevens (1)
The Novel’s Extra (1)
My Death Flags Show No Sign of Ending (1)
The World of Otome Games is Tough For Mobs (1)
Sevens (LN) (1)

These are recommendation lists which contains The Strongest Dull Prince’s Secret Battle for the Throne. You should give them a visit if you're looking for similar novels to read. Alternatively, you can also create your own list.
More Lists >>>

I love it. Please give the story a chance. I can understand why some people gave low ratings but I can tell you right now that the MC will change because of the circumstances forced on him. He has a twin brother ffs. You know where is this going right?
Spoiler

He will pretend to be his righteous brother in case you didn't get it. But because of his kindess as well he will do more than that... Just read it yourself seriously.

I enjoyed it so far, kinda reminds me of Sevens or The World of Otome Games is Tough For Mobs. MC is the lazy carefree incompetent prince out of the dozen siblings. Doesn't care about the succession, but his family gets dragged in by the older greedyass f*cked up half-siblings. He knows his bad rep and honestly who cares, certainly not him, but uses it to his advantage. Secretly OP only in magic, but not physically. What's predictable are only the chicks/harem but not really a romance story imo, at least not... more>> so far. This is a story where not everything goes as planned and MC does get screwed over, so the plot, action, and MC himself makes this interesting to read. -1 star only because there's no direct links to the chapters, not even in the ToC. <<less
1 Likes · Like Permalink | Report

Extremely poorly planned, with incredibly unrealistic scenarios and scenes. This story is badly written and it's very clear, even early on, that the author has plotted very little of the story ahead of time and is simply writing each bit in the spur of the moment. I would not recommend this novel. The translation isn't amazing, but while there are noticeable mistakes and errors in the early chapters, the story is still readable and that is what matters most to me. Now, for the main part. Examples of the truly awful writing. ... more>>
Spoiler

MC's hidden identity is an SS-Class adventurer (like the description says). That means he's an astonishingly powerful being that should inspire a mix of fear and respect into those ranked below him.

And that doesn't happen. He gets belligerently confronted by an Adventurer well aware that he is confronting an SS-rank Adventurer in public, and in return, this is what the MC says to that:

"What you want to say is reasonable. I also understand your dissatisfaction. So if you want to shout at me or beat me up, I will not complain."

Let's look at something else.

There is a powerful Duke that the MC has gone off to meet up with, in an attempt to win him over to his little brother's side.

The MC goes in his SS-Adventurer disguise to the front gate of the Duke's mansion. Here, he tries to get in proclaiming his identity and showing his Adventurer Card.

The gate guard (there's only 1) assumes there's no way this could be the real Silver. He turns the MC away without even looking at his Adventurer card to confirm, an example of extreme incompetence for a guard trusted to maintain the front gate of an extremely important Duke's mansion, trusted to do this all by himself.

The gate guard is actually the Duke's son.

An extremely powerful Duke, who is very wealthy and famous, has only a SINGLE person guarding his mansion's gate, and he sticks his SON there?! ?! ?! ?! ?!

He has no actual gate guards or anything of that nature?

Yet you expect me to believe he is a wealthy, powerful, and influential Duke, one of the most important figures in the Kingdom...

"Because you couldn't do much I left you to guard the mansion gate while I was out subjugating monsters!"

But it's just such a poorly thought out, terrible excuse to try to force in the Duke feeling indebted to the MC, it's just... bad.

This is terrible writing.

There are many other examples that I did not mention, and I only read 3 chapters in. What a disappointment.

This could have been good if it weren't for the unnecessary "Political Drama" I love Politics as much as the next guy but this is heavily flawed as it always gives downside to the MC. "OP" is only for convenience's sake and the Author always has to give a downside for everything = for more drama. I can't help but think at times he's one selfish bastard forcing his brother into a position like that.
I get where the Author coming from, we see stories like this every day, I think it's... more>> really badass idea but the execution was awful and not very well thought. [But then the author tries to portray them as two badass brothers working together for the Throne, when it isn't really like that when MC doing all the important work.. Then for some strange reason, the Author tries to make us warm up to the Emperor whose no different from his Children who only care about their Empire and they don't really care about their Citizens. The Romance makes no sense at all. Honestly, I hate the romance as I find them annoying. In conclusion. The MC is f*cking useless. (Forgive my censored language) <<less
2 Likes · Like Permalink | Report

Okay, Super OP MC can't stand his ground and again is super mature for his age. The plot is okayish up till now. As for why I've rated 3, I don't like the mc's character. He's positive about everything, doesn't know how to protest and always finds a way to blame himself for the mess of the plan no matter caused by who. Wth? Is he not a prince? He doesn't wanna compete for the position of the emperor but helping is brother to save his family, why? Aren't you super strong? You... more>> can save your family with your strength alone. He also judges others if they're worthy of the position of the emperor whilst the one he's helping is also not worthy and can only become an emperor with his help. What kind of hypocrisy is it? <<less
2 Likes · Like Permalink | Report

This novel is good that is based purely on siblings' rivalry (will be developed further later). They use every means to try to get close the distance between the throne and themselves (of course). They don't see the brotherly bond among their own siblings. Their hatred is not to be underestimated. The situation developed is so intense that the king himself starts to take some measures to ascertain the ability of the princes and princesses to make one of them inherit the throne. But this further develops feud between them... more>> as they are fighting for the same spot. Its kill or to be killed! Here comes our protagonist, who is not even close to being interested in the fight for the throne but is still caring for people close to him. And he has a twin younger brother who is kind and wise. Therefore he thinks that his little brother should inherit it. But how should he accomplish it? This question is raised in his mind about how should he help his younger brother. Worry not, he still has some influence over the continent being an S-Class hero. But on the other hand, his identity is hidden (or should I say he doesn't want others to know about him). <<less
1 Likes · Like Permalink | Report
Leave a Review (Guidelines)
You must be logged in to rate and post a review. Register an account to get started.

I Didn't Even Want to Live,...
Advertisement