Novel Updates
RegisterLogin
Theme
Search
Your changes has been saved.
Advertisements
The Simple-Looking Sword Saint is Nevertheless the Strongest

Home >
Novel >
The Simple-Looking Sword Saint is Nevertheless the Strongest 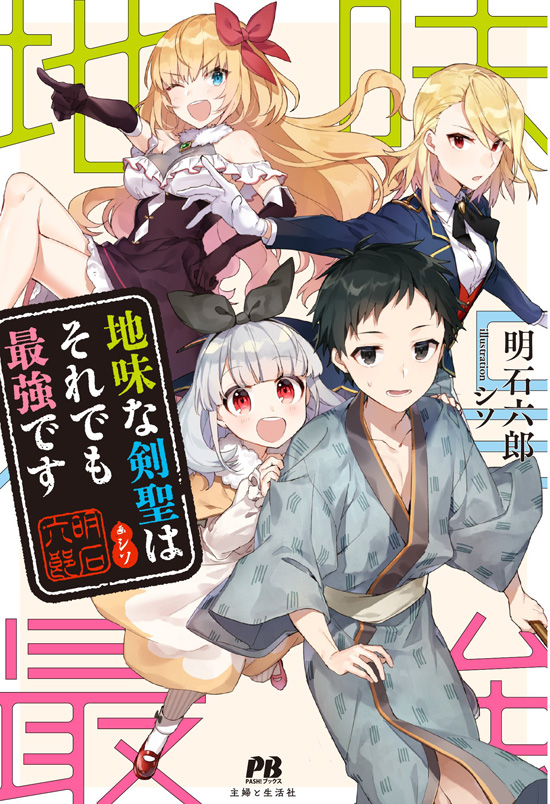 One entry per line
Siso
シソ

One entry per line
Shufutoseikatsusha
Syosetu

A Japanese student named Shirokuro Sansui died because of God’s mistake and was teleported to a different world.

He claimed that he wishes to become ‘the Strongest’, so he received a referral letter for a Sage from God and received 500 years of training.

When he reached a stage where he could be called as ‘the Strongest’ in the common people’s standard, he picked up a baby near his training grounds, and there, he finally starts his isekai adventure.

His training is simple, his techniques are simple, he’s ‘the Strongest’ but he looks simple.

With an ordinary wooden sword in hand, the fight of the simple-looking Sword Saint has just begun.

These are recommendation lists which contains The Simple-Looking Sword Saint is Nevertheless the Strongest. You should give them a visit if you're looking for similar novels to read. Alternatively, you can also create your own list.
More Lists >>>

As this is only at chapter 2 I will not be putting any spoiler tag. He gets called a barbarian and a monkey, is told that he is only alive/left with both arms is because of the child he is carrying, then say they will test him and hire him to work for them. The MC proceeds to be extremely grateful and think they are really nice people. This coming from 'the strongest' person in the world who admits that he may not be faster than a royal guard. Without going any... more>> further we know that the MC is 100% dense/ an idiot who HAS TO RAISE A CHILD. Sure he says he may not fit in to Japanese society after the 500 years of training... but really author? Did he forget language and what an insult is? What humiliation is? <<less
21 Likes · Like Permalink | Report

All I can really say 3 chapters in is, "Poor". The series starts off awkwardly and bizarrely, tho its interesting to see the author trying to be original and subverting tropes. Unlike many series, the god quite literally doesnt feel a shred of remorse for killing MC by mistake and is quite lackadaisical. "Meh, I messed up, you get 1 wish kid". Also, no blessing. MC had to work hard, for 500 years, for his strength. However, this very quickly goes downhill with how the series continues to progress from chapter 2... more>> onwards. This isn't someone that was hardened through training for 500 years. He acts humbly and submissively as a normal japanese teenager would. Even if hes not going through 500 years of direct combat experience or anything, you'd think 500 years of sage training would at least let him develop his mental maturity a bit but nope. No such thing. He just accepts the sh*t they say to his face and takes all this haughty nonsense from these nobles face on. Like... come on. They decided to give you a chance for employment sure but... you're not gonna react at all to some overprotective dad and brother literally, explicitly trying to kill you? When you're the strongest? And this brother's attack would have been enough to kill you? What happened to "strongest"? Not sure if that'll be retconned later with him tanking a lot and finding out hes more durable than he thought or what, but... to be quite frank, the series is a let down. I only read it cause Paichun is translating it and I'm desperately searching for one of these sort of simple series to read atm. But this is much much worse than paichun's other major project, kuchibiku. Meh. I'll give it until chapter 10 I'd think but the start has been quite appallingly poor. <<less
6 Likes · Like Permalink | Report

Don't waste your time with this series. It's completely generic, unoriginal, and a downright snooze fest after the first dozen or so chapters. The worst aspect of this story is undoubtedly how utterly passive the MC is despite being a 500 year old "Sage". He acts and thinks like some beta japanese kid, per every isekai story, and spends the entire series being bossed around by pretty much everyone in the series. He has no real ambitions or dreams of his own, even something simple as exploring the new world he's... more>> been summoned to never crosses this idiot's mind as he spends the whole series serving under some s*upid noble house because he has to raise some kid he found on the ground, who of course is someone related to royalty like that wasn't the most obvious thing in the world. Don't even get me started on his marriage to the female butler as that entire "romance" was just pure cringe and he goes along with it for pretty much no reason other than "sure why not?" despite clearly having no romantic feelings for the girl. I don't understand how this story became popular enough to get a manga adaption or whatever but it's just sad how stories like these are getting attention when there are hundreds of better ones that will never get the same amount of attention. <<less
5 Likes · Like Permalink | Report

As far as chapter 3, I like what I read. MC didn't instantly became OP by receiving unique skill from God without any effort, but he has to work hard to be strong instead (fortunately author skip the whole 500 years of MC's training so we don't have to wait for the story to progress only to read a lot of chapter of him training to be strong) and so far no level, status, appraisal & inventory skill to make it look like MC is in a game world.
4 Likes · Like Permalink | Report

I'm really trying to be open with my choices on what to read, but some are just so idiotic, you couldn't imagine what the writer was thinking of. I've read the manga variant and the novel to see any comparison and boy, do they suck. The MC is a...... social justice warrior. I've no qualms on how to describe him. He's tough but his mental fortitude is weak, even after 500 years of tempering. Characters around him boss him around, snobby and arrogant and he goes through with it. This makes no... more>> sense whatsoever. I hate this novel due to the progression of the MC in his mindset. He became dumb just after becoming a step-parent. <<less
3 Likes · Like Permalink | Report

I've been enjoying the manga translation and wanted to read the light novel, since manga adaptations usually truncate stuff or sometimes skip things and you just get a more expanded story in prose most of the time. The first three chapters are great! ... unfortunately that's all that's been translated. And it's been almost a year since the last update.
3 Likes · Like Permalink | Report

This Story is bit fast-paced, a typical Isekai theme with a magical buff in its world setting but if you put the plot aside, the interaction between the characters is dry and sloppy, Our MC that got a chance to train in becoming the strongest by God for 500 years is a huge joke cause our s*upid MC is severely lacking in ambition, motivation and drive. Just why did our MC undergone 500 hundreds of sword play training, he is brainless and unclear,..? Next, our MC becomes a underdog then... more>> gets toyed around by a noble's daughter who is a selfish bi*ch, it's shows how ignorant and pushover MC is, with mild beta personality ! When it comes to romance this will definitely dash your hopes, the author is absolutely unreliable when it comes to romance, seriously it could have been great, if there is no element of romance in the novel.
The Novel's true setback is MC personality who needs to change slowly with plot.. As red said it's truly saddening that some good novels are not getting much attention what they deserve. Adios guys, ~~ <<less

İf you ask me story really interesting you know MC plain but strong so when I start novel I think okay ... more>>
Spoiler

he gonna do something cool god really care about humans so asking MC what he want and MC chooses what he want thats good there no s*upid start here but then boom 500 pass like nothing MC found baby and his master go raise this baby and MC like okay bruh he goes meet most annoying character in the novel aka know as ojousama MC accept for raising baby then boom again time skip like nothing and believe me thats makes no sense I know this is fiction not real but come on you cant do that and after that MC goes away with child or without nope he stay becomes s*ave of moronic ojousama who thinks she's so smarth but s*upid enough to not choose MC as husband you see that lol MC op and mc's genes too op but nope she want other guys yeah we know japans love ntr but come on then other girl loves MC servant knight girl then MC somewhat accepts that lol there no story or something make you say wow s*upid character and story makes no sense I know I am hars here but come on why MC after 500 stay s*upid ? He become sage okay but why he still act like child ? I know he babyfaced sage but thats makes no sense other hero have a harem and he's weak MC owns so hard many times that hero but nope MC need stick with one girl and ojousama need choose someone diffirent I dont know but this novel feels shoujou manga style weird s*upid believe me story makes no sense even you read manga but still not below 3 star and I didnt read all so I dont know thats why for now 3 stars maybe later something good happens then I give more.

Vector Control in the Multiverse