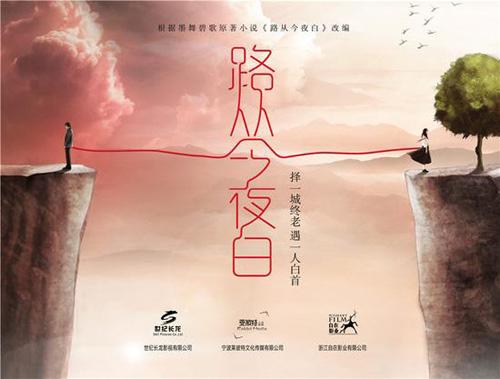 Status in Country of Origin. One entry per line
171 Chapters + Extras (Complete)

Time flew by. Even though their graduation was a long time ago, after countless nights and passing through fleeting time, their story is still circulated around the quiet campus of University G. This story has many different versions, but there is one thing that everyone knows to be true. Back then, that ordinary girl betrayed the genius of the fine arts faculty and yet, his love for her still remained. For her, he nearly died in a fire. For her, he gave up his chance to study abroad. Years later when they meet again, he is successful with a new girlfriend in his arms and she is indifferent with a light and clear smile. However, unknown to anyone, her longing had begun long ago and even now flooded her thoughts…

One entry per line
路从今夜白

These are recommendation lists which contains The Road Turns White Tonight. You should give them a visit if you're looking for similar novels to read. Alternatively, you can also create your own list.
More Lists >>>

I think the poor rating for this novel is from the first several chapters. The story starts off vague but it's on purpose as each chapter slowly reveals the history between the ML and MC. Once you get to chapter 22 you will need to read the updates as soon as they're released! The chapters are short so you'll get there pretty quickly. This novel is very similar to Silent Separation.
9 Likes · Like Permalink | Report

Why do I feel like this is MWBG’s Love in Another Life but in modern time? That novel actually brought me here XD Also I’m here for the angst since I know it’s gonna be a HE anyway. Can’t blame others for rating so low since those dramas is the result of chains of misunderstandings. I’ve MTL-ed this few weeks ago since I think it has been dropped (?), I liked the story just like the other novel of the author LIAL:MGT. I’ve actually read few spoilers just to encouraged me more... more>> to read it so I hope others would read it too. It’s what I’ve understand in reading from MTL so it’s not gonna be 100% correct. Also, I've skipped few paragraphs since I really can’t comprehend it xD So why did MC left ML? There are a lots of reasons hope you understand my poor english xD
Spoiler

MC’s mother is a genius famous painter who died with the same disease so it’s a genetic disease. Her parents had a misunderstanding that I think resulted into her mother’s death, and she died alone in a hotel with her series of gloomy paintings waiting for her husband to realized his wrongs and also to take her away.

Yet it didn’t happen. So the father married his first sweetheart after his wife’s death, I dunno exactly when tho, which made MC dislike/angered towards his father.

MC also has an adopted brother (former cousin) who have the same disease. She actually watched how her brother fell in love and die from his disease. This brother actually left his former sweetheart to not burden her. So in the end, this sweetheart married someone else and is happy with her husband. So MC watched how his brother being heartbroken and happy for his love, also how he fight for his life during his series of operations, but died anyway.

But before that, ML doesn’t know MC’s family so he misunderstood that MC is having an affair with MC’s brother. So.. MC used this reason to broke up with him. Also, she doesn’t want him to know that she has a disease as to not have him suffer with her.

Also... because MC’s brother actually requested MC to accompany him for four years in this battle for life.

Sooo it’s a mess, everyone has their own selfish and selfless reason. But in the end, she decided to live her remaining life loving the ML.

But! It’s a happy ending ‘coz she had a successful operation and able to live once again with ML.

But! There’s a book 2, which I only read a few parts and it’s also angsty but happy ending. It tells the detailed story of their school days and married days (MC wants a child but because of her poor health the ML doesn’t want her to)

For me this story is too melodramatic. All the drama could have been avoided had the FL been upfront about her situation. There is heart wrenching story that makes you want to root for the couple then there is story that just piles up s*upid decisions on top of each other. This is the latter type of story, don’t read this if want to avoid unnecessary headache. And this story was apparently turned into a movie, I tell you the story is perfect for movie, because the s*upidity of the... more>> situation only happens in movies! <<less
0 Likes · Like Permalink | Report

It was frustrating reading this novel at first, because of all the flashbacks SUDDENLY each chapter! But I'm giving it 5 stars for the emotions author describes gets me everytime. Looking forward for the ending tho!
0 Likes · Like Permalink | Report
Advertisements
Leave a Review (Guidelines)
You must be logged in to rate and post a review. Register an account to get started.