Novel Updates
RegisterLogin
Theme
Search
Your changes has been saved.
The Reason for Marriage

Home >
Novel >
The Reason for Marriage 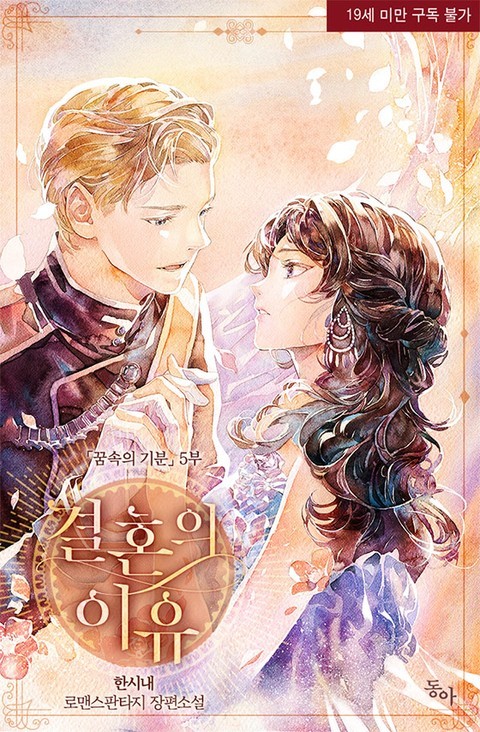 One entry per line
PYRITE
파이라이트

“I heard you have a fiancé? Do you love him?”

One day, Daniel comes to Iveka, who has lost her memories of working for the Bureau of Judicial Affairs, and arrives with an unexpected offer: marriage.

“You must be busy, but it’s a simple matter of business. How about marrying me?”
“Excuse me? Of all women, why me…?”
“Of course, you can refuse if you don’t want to do it. You might not even like the queen’s position.”

However, it won’t be like a fairy tale. He had not fallen in love with her at first sight. It was a proposal unlike any other, and a sudden fate as a queen. Will she be nothing more than just a queen to be taken advantage of?

The reason for this wedding is yet to unfold.

One entry per line
Reason for Marriage
결혼의 이유

Feelings in a Dream (Shared Universe)

These are recommendation lists which contains The Reason for Marriage. You should give them a visit if you're looking for similar novels to read. Alternatively, you can also create your own list.
More Lists >>>

Normally I greatly dislike the smut genre due to it being absolutely rife with toxic tropes that the authors try and pass off as being 'sexy' or 'romantic'. But this one? Pure as all hell and we love to see it. The basic premise (under spoiler cut cause kinda long) ... more>>
Spoiler

is that Iveka (FL) is the illegitimate daughter of the Countess, born from an affair she had. Because of this, she faced a lot of discrimination from her family and peers for not inheriting the their beautiful blonde hair. As the Count didn't wish to have Iveka around, he sent her off to attend college where she went on to join the Bureau of Investigation at the age of 18. 4 years went by and eventually Iveka wished to leave her work for unknown reasons. Before she can, however, they give her the choice of being monitored for the rest of her life (to avoid leaks) or to have her memories of the past 4 years erased. For whatever reason, Iveka chooses to have her memories taken. After that, she is approached by Daniel (ML) with a proposal of marriage. Daniel himself is the King of their nation (of which there are several nations ruled by Kings who serve a central Emperor). He was originally a third prince with no desire for power, but the struggles of his siblings eventually resulted in the crown being put in his hands though happenstance. Not wanting that same struggle to continue on in the future, Daniel wishes to take a wife and have a child as soon as possible so that if something were to ever happen to him, succession would fall to his own child rather than another relative.

[collapse]
As for their relationship, it's so cute! Iveka has fairly low self-esteem and she can never understand why Daniel would want her. She constantly feels like she needs to do something to prove her worth in order to be a valuable and worthwhile partner. She feels this way due to the fact that the last 4 years of meaningful work she had done with the Bureau is basically nonexistent in her mind. Daniel is greatly saddened by the fact that she feels that way, but is always ready to reassure her-- saying that he doesn't need to her be 'useful' to him, and that merely having her be happy at his side is enough for him. He also tells Iveka that they are family now, and that even if the Count scorns her and her sisters hate her, the new family they're creating will always be there with her. He even goes as far as to show her the secret passages in the castle (originally known only to him) so that she may have time to be alone if she ever needs it. But even as Iveka is uncertain about her value, she's still an extremely intelligent and amazing woman. She wasn't welcomed as a member of the Bureau for nothing! There are plenty of moments where she shines incredibly bright. And during the snu-snu time? Daniel is so attentive and kind. Iveka is left to wonder why Daniel cares so much for her pleasure during all of it, especially since their only aim is to have a child. Her happiness during the ordeal shouldn't matter, right? But Daniel is constantly asking her if she feels good, if what he's doing is okay, and it's clearly important to him that she feels pleasure during every moment of it. The author even goes as far as describe Daniel's constant asking for consent as an 'obsession'. Even when he himself is teetering on the edge of desire, Iveka always comes first. We love consent!! The only real uncertainty that comes from their relationship is Daniel's supposed love for another woman. It's well known that Daniel once had a woman he was fiercely in love with but that she disappeared at some point. The only remnant he has of her is a pen she had gifted him on his birthday with the initials "E.J".
Spoiler

Though, it's implied (at least in my opinion) that Iveka is E.J, but that she may not remember due to the memory erasure and Daniel can't tell her because that would be a breech of contract. Though I could be wrong. But I feel it in my bones lol.

[collapse]
I'm really liking this one, which is rare since I really dislike the smut genre as many are based on awful tropes that function more as kink fulfillment rather than an example of a good, well balanced relationship. I hope the author continues on this path and doesn't try any toxic or problematic stuff like so many others in the genre do. <<less
30 Likes · Like Permalink | Report

I'm still early but there are already glimpses of the character's past, their motivations and their connections to each other. All of these are implied subtly and not In-your-Face type kind of description other novels tend to do, which is fortunate! It's interesting. Will edit once I read further. As for the amnesia, MC was neglected by her family because she had a different hair color and suspected to be illegitimate. She did well in school and got to work in an independent government department but was transferred. Prior to transferring... more>> jobs, it was required for her to wipe away her memories (4 years worth of it) so that the department's secrets are safe. She has a pessimistic but realistic mindset, but she's not wallowing in self-pity either, which I appreciate. <<less
5 Likes · Like Permalink | Report

Cute story so far, backstory and events that lead to the present are being revealed at a good pace.
1 Likes · Like Permalink | Report
Leave a Review (Guidelines)
You must be logged in to rate and post a review. Register an account to get started.