Novel Updates
RegisterLogin
Theme
Search
Your changes has been saved.
The Old Man Who Got a Second Round in Another World 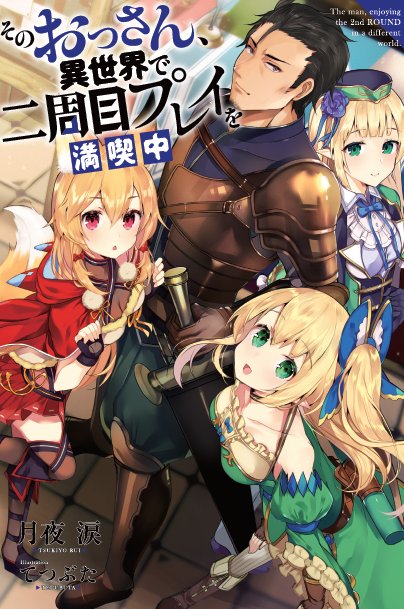 One entry per line
Tsukiyo Rui

A veteran adventurer was preparing for his retirement when his former disciple returned to the village, intending to recruit the old man to his party. Filled with regret due to an incident that happened in his first party, the old man rejected his offer. Being affected by his disciple’s adventurous spirit, the old man leaves in hopes of reigniting his long lost dream, to become the strongest adventurer that ever lived.

These are recommendation lists which contains The Old Man Who Got a Second Round in Another World. You should give them a visit if you're looking for similar novels to read. Alternatively, you can also create your own list.
More Lists >>>

If you like reading the same two to three paragraphs each chapter, sometimes multiple times, then this is the series for you. Holy crap does the author love to repeat himself like an elementary schooler trying to pad his word count. I'm serious, he re-treads ground like an obsessive treadmill enthusiast, and it really adds to the monotony. The story is generic, just add 20 years to the standard protag's age and expect him to act roughly the same as every other MC. He hides his secret to incredible power from... more>> his old friend, lies constantly if it would remotely lead back to anyone else getting a chance at a new start, and then sighs at all "these youngin's that can't mind their manners" when dealing with someone who's walking 1. With a level that makes him look like a rookie/idiot, and 2. With the garbage, throwaway class that can only really leech from parties (but it's super OP for him, because secret hidden knowledge he refuses to share). He's literally the only person on the planet who has put any effort into learning how to properly swordfight, since nobody else has mastered his incredible skill of "deflecting blows with a sword, instead of taking them to the face." It's literally a world full of idiots and mooks, no exceptions. Still, not the worst, and it can be funny. 3 stars, I'm just nitpicking <<less
19 Likes · Like Permalink | Report

Story is not bad at all but unfortunately the world is too simple. It seems to be based on a overly simple game that prevents a sense of reality from developing for me. Otherwise it's entertaining enough.
17 Likes · Like Permalink | Report

The novel is ok but the author is constantly going on about how much male adventurers rape. Like a get that you need to make the MC stand out, but for the amount the author pushes it you’d think that literally everyone but MC rapes compulsively. It’s weird.
6 Likes · Like Permalink | Report

Okay quick synopsis. A reincarnated JP of course it is a JP, who is an old geezer (facade) from the world of sword and magic, together with his elf waifu and loli fox girl. MC - Has a lot of problem, on the surface, the writer keeps emphasize how mature and how smart the MC is, but In reality, he wasn’t, He was a coward, douche, hypocrite, super beta, It was an evolution of Beta MC, he is a super one. Harem - Turn into a monotone gal, that you can find In... more>> any Shitte JP 3rd rate reincarnated LN. Romance - Has a decent development. That’s the only reason I give It a single star. Plot - Has a lot of contradiction which is frustrating, so If you can tolerate the contradiction and Hypocrisy of the MC, you might enjoy the novel. Action - It was fine, not good, but fine. Enemies - Every Adventurer except from the MC are all bandit with a facade being an adventurer. They should add slice of life. I mean It was my first time reading an adventure novel with junk info for a whole chapter how great a Beef Meat Is. <<less
5 Likes · Like Permalink | Report

This is a light read, not too long not too short it is enough to get your intention. As of where I am reading there are no lengthy explanation about food or monster hunting. The story is about a lv50 36year old man with the lowest stats possible and for that he can't level up any further. By chance he got the opportunity to reset his level and stats to level 1 and got a better stats for every level up thus his second chance. There is nothing wrong with the MC... more>> yet, he act reasonable for his age. <<less
3 Likes · Like Permalink | Report

This novel has two prequels both Elf Tensei and Cheat Majutsu, you do not need to read either prequel but doing so will directly inform the reader of who the fox girl met very early on in this novel is.
Spoiler

Elf Tensei's MC's Granddaughter and Cheat Majutsu's MC's Daughter. (Golden fox with black tips on her ears, white tip on her tail and rose/red eyes, it really can't be anyone else as she even repeats lines spoken by both her mother and grandmother in relation to her tail being touched.)

Ironically both fox girls in those two novels pined for the mc's affection and the latter one outright says at the start that she's not interested in a guy like her father who looks at several women as he had three wives to then marry a guy who takes three wives, this novel will most likely take the same route (possibly even more as this novel has not finished yet.)

Would be an enjoyable story if the MC was more ruthless. I like kind MCs, but I'm not a fan of MCs that are determined to redeem every enemy they make (which seems to be the trend here). Redemption is something I'm always happy to see IRL, but it makes for an unsatisfying action story. I want to read about a badass MC and enemies who get what's coming to them. I can't really get pumped up otherwise.
1 Likes · Like Permalink | Report

The Joker's Troubled Time In Another...