Novel Updates
RegisterLogin
Theme
Search
Your changes has been saved.
Advertisements
The Magical Revolution of the Reincarnated Princess and the Genius Young Lady 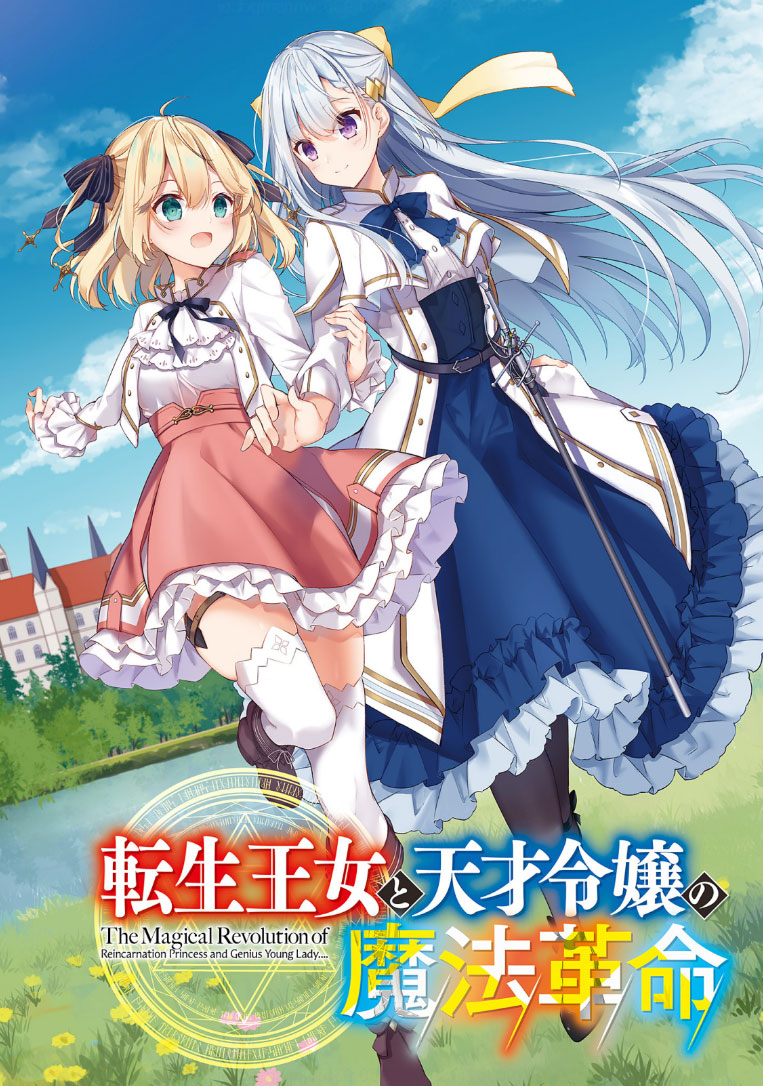 One entry per line
Kurasu Piero

One entry per line
Kisaragi Yuri

Anne-Sophia, the Princess who remembered her previous life at a young age, as well as her old self’s intense love of magic, set off to live out her fantasies in this fantasy world.

One day, during a magical mishap, she stumbled upon a scene where her brother Algard was breaking off his engagement to his fiancee, Euphilia.

What nobody could have foreseen is that this strange meeting would end up changing the course of history.

Even If I’m Reborn as a Cute Dragon Girl, I Will Still Make a Harem (1)
Slow Prison Life (1)
I Favor the Villainess (1)

These are recommendation lists which contains The Magical Revolution of the Reincarnated Princess and the Genius Young Lady. You should give them a visit if you're looking for similar novels to read. Alternatively, you can also create your own list.
More Lists >>>

This is one of the series that is able to make me hooked with only 2 chapters. Yes, I cannot resist the urge to read the raw. This series has a comedy structure which is similar to the Slow Prison Life which is enjoyable, but it has more serious side compared to the Slow Prison Life. The series starts by defining the plot at the first chapter, after that there will be a time-skip. The series will reveal the logical reason along the progression of story.... more>> -Story- -It has interesting plot where the MC remembers her memories when she was alive in modern world without magic. Of course, she is interested in magic and wants to use it. This is the main plot. Further explanation will be spoiler.. =w= -Do not worry, the author is not the author who makes the series where everything (problems) only makes you only say "Ah the MC comes, everything will be resolved according to the MC's will" - For you who read for the shoujo-ai, you must read further.. because there is no like "Ah, I just met her and I love her" things. The shoujo-ai is a process, not an accident. -Characters- -The MC has an aura which will make you want to support her. She is a MC type that can make the atmosphere becomes her color. -She is not the generic isekai MC because of (spoiler) xD...... yeah, you need to read further to know. -The characters are "alive". You cannot say "That character is bad because he is bad". Yes, this series has good characters building. -Translation- -You can expect a good translation from Mistakes were Made -Conclusion- For these reasons, I rate this 5/5. Phew, this is the longest review I have written for now. <<less
24 Likes · Like Permalink | Report

Hey there, This one a rare type of isekai + fantasy one. Usually it goes yo straight type of harem but, nope. This one heading to shoujo-ai type or yuri route ;) I read it and it had the typical opening of otome game and, ya know the trope ;) The translation was nice and the translator put good consideration what goes in it or what not since it seems this one had a LN and WN version and both had different plot ya know ' cause the translator also... more>> put some picture thats from LN too! So far, it's worth to put it in reading list for those that crave the yuri-ness or shoujo-ai + isekai + magic (makes me think the possibility of having magic babies XD). P/s : maybe the one that gave 3 stars is the one that doesn't like yuri or shoujo-ai and tryin to discourage people from getting this one on. Well, they sucks! (^~^) <<less
14 Likes · Like Permalink | Report

Came from the manga translation by the same translator. The comedy is top tier even amongst novels of 4.5+ Rating, the characters are well written, the way in which the isekai setting shapes the plot feels natural and non-cliche (at least compared to the many other isekais that I have read), and I could continue complementing this but if you're reading this review, just see it for yourself instead. Really hope this gets picked up soon. (Officially dropped by 'Mistakes were Made', site is misleading, see their discord announcements)
9 Likes · Like Permalink | Report

Only two chapters are translated at this time, so take my recommendation with a grain of salt, but so far it's a lot of fun. The main character reincarnated from Earth and is obsessed with magic. She is actually unable to use magic, despite the swords and magic fantasy world, but uses (presumably) the scientific method to revolutionize magic technology anyway. All of this happens off screen, mind you. She gets reincarnated and then the story skips ahead several years after she has succeeded in creating 'Magicology' and becoming a... more>> powerful but uncontrollable force in the kingdom. The thing that happens in the first chapter that really got my attention was that she crashes into the 'Villainess bad end' scenario and within seconds recognizes it for what it is. I like the meta awareness. I have no idea what direction the story is actually going to go, but it looks like fun thus far. Give it a try once it has more chapters. <<less
5 Likes · Like Permalink | Report

It is surprisingly good. Normally, when I see a long-ass title with terms 'reincarnation', 'genius' and 'magic', I don't even feel like trying it, as I have seen too many boring isekai stories made out of the same model that you can tell just from reading their first chapters. But this one is different: our MC is not normal.... more>> She is not elegant and respectful as a reincarnated noble lady should be; her sidekick is. She is not the one whose engagement got cancelled by some dumbass prince; her sidekick is. She is not born with overpowering magical talents; her sidekick does. And, she is not sane; her sidekick is. However, she is still op, just in a different way. She is so unique that you will definitely like her. <<less
4 Likes · Like Permalink | Report

Here's my (Otome) Isekai setting evaluation: Technical: A The quality of the writing + translation is good. You can tell when certain stories are unedited and written by amateurs, based on the amount of details, etc. This is well done both at the lower level (quality of prose) and higher level (integration of exposition, separation of plot arcs) up until now. Note: YMMV, since e.g. My personal tastes let me tolerate wordy fiction.... more>> Premise: A High rating for novelty. MC being a outsider to the Otome setting without foreknowledge mixed with her being completely OCP to the situation is great. Also, yuri is not a demerit here. (Political) Intrigue: B+ Volume 1 sets up the basic situation, but it's only with the start of volume 2 here that we seriously dive into politics. There's already the bare minimum here with how it's aware that a denouncement is absolutely not the right way to handle the situation politically, and the finagling needed for the preliminary steps needed to resolve the situation, but the rest of volume 1 mostly focuses on establishing the setting and characterization of the protagonists. This is absolutely the right choice - it takes time for politics to move at this level, and so pushing it further back in the timeline while fleshing out the setting first works better than rushing it. Up to chapter 15, it's done a good job of analyzing the situation but hasn't gone so far in terms of using intrigue in the form of moving the plot, so this gets a B with hopes that it'll move into A. To clarify that last statement, we haven't seen much political action besides the major decision taken at the start of volume 2, so it's hard to say whether resolution later in the series will be done with the deft dagger of intrigue or the blunt hammer of the MC's magic, though she seems competent enough to be using the former. Fluff: B It's cute. I'd like to see romance start up between the MC and the FL, and as with the politics it's really too early for anything to show up here so far other than the initial friendship. Character Depth: B- FL is an archetype. The maid is an archetype. MC is a slightly more complex archetype. The king shows up more as a gag character. As with all the other points above, it's really too early for any character development to show up, but the setup so far at least makes it a possibility. Overall rating: S- Volume 1, by itself, is a solid A. It mostly sells itself based on the quality of the writing and the premise, combined with the lack of any egregious flaws. The start of volume 2 that we have so far bumps it up because it promises that we're not (just) getting a random fluffy SoL where MC and FL go around playing with magic while the King resolves all the problems in the background, but that instead we're also set in a serious setting with intrigue and politics that the MC needs to take a hand in. If there are no missteps with the rest of volume 2, I'll bump this up to a solid S, so the S- score here reflects my expectations of quality based on what I've seen up until now. <<less
4 Likes · Like Permalink | Report

Let me first say that I still don't like Shoujo Ai and/or Yuri. (Especially to Sora-chi since he made that made the P.S statement) Now that we have my declaration. Here is 5 stars. For starters, I love the family dynamics. It reminds me a little of Slow Prison Life where people try to be serious only to end up in Tsukkomi heaven. I'd probably be able to write more than that as a proper review if there were more than two chapters currently. And as usual, as far as personal preferences... more>> go, Mistakes Were Made never make mistakes. <<less
4 Likes · Like Permalink | Report

Honestly I was super skeptical about this novel, as I hate watching broken engagements that don't imediately f*ck over the royal douchebags that think it's okay to do that. Holy sh*t guys, like people said before, there's no immediate first love, the protagonist is weird but not really op. ... more>>
Spoiler

On regaining her memories, we as the audience knows what's up, but we still don't understand how it's completely affected her. She acts like an idiot, but has shown a mature, serious side that is willing to be the queen she was meant to be. She's still hasn't really opened up to her parents, and she is viewed to be inferior by the ministry of magic. She has enemies within herself and from those around her as modern views make her seem like a heretic to the public eye.

She still can't use magic (it's the spirit system guys), and still lacks in being able to create what she wants. Having to even use magic stones (from monsters), to create permanent tattoos just to be able their abilities

[collapse]
Guys I'm f*cking in love with this MC, because she's not forceful towards the love interest, she isn't focusing on love anyway, the magic system is somewhat unique and super logical in how its explained. This is so f*cking good. <<less
3 Likes · Like Permalink | Report
Advertisements
Leave a Review (Guidelines)
You must be logged in to rate and post a review. Register an account to get started.

One Piece: Reborn as a Skypiean