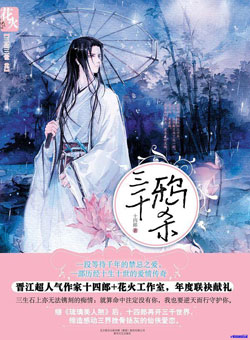 Status in Country of Origin. One entry per line
54 Book (Complete)

On the mountain balcony, Princess Di Ji stunned the world with the song《Peach Blossoms of the Eastern Wind》.

After the stained glass fire, the Great Nation of Yan was no more, the matters of it’s past as if a dream. Concealing her identity, Di Ji hides herself at a place where immortality is cultivated, Qiang Qu Mountain, and becomes the servant Qin Chuan.

But unexpectedly, old friends begin to turn up one after the other. An old lover, Zuo Zi Chen is now entangled with Xuan Zhu after losing his memories, and an elegant and distinguished Fu Jiu Yun suddenly appears, purposely teasing her in every way possible. It’s hard to separate his truth from lies, and difficult to accept his favour.

Taking advantage of the White River Dragon King’s arrival in Qiang Qu Mountain, Qin Chuan steals the Master’s treasures and flees. Knowing that he had been deceived, Fu Jiu Yun is extremely angry, and chases after her however far she goes. After knowing her mission, and being unable to stop her, he can only use his own life to help her succeed.

But she doesn’t know, in order to meet her, he has kept watch for a millennium.
She kept strong despite feeling otherwise, vehemently refusing him: You can have me, but never think for once you can have my heart!

That man completely didn’t care. He faintly smiled: I only want you, who said anything about your heart?

She held onto his leg, crying: Your lordship! Please! I’m willing to offer myself!

The man kept his attention on the book in his hand and replied her absent-mindedly: You want to offer, but I don’t want you.

Takasugi Shinsaku penned: “I’d kill all the crows in the world, to sleep with you till morning tolls (1).” The novel is drawn from here.

One entry per line
Ballad of Jiu Yun
三千鸦殺
九云辞

A Match Made in Heaven (Shared Universe)

These are recommendation lists which contains The Killing of Three Thousand Crows. You should give them a visit if you're looking for similar novels to read. Alternatively, you can also create your own list.
More Lists >>>

A Traveler's Legend: Leisurely Living My...

A Process of Cultivation in Large...
Advertisements