Novel Updates
RegisterLogin
Theme
Search
Your changes has been saved.
Advertisements
The Hero King, Reincarnate to Master the Art of War ~And Thus, I Became The Strongest Knight Disciple (♀) in The World~

Home >
Novel >
The Hero King, Reincarnate to Master the Art of War ~And Thus, I Became The Strongest Knight Disciple (♀) in The World~ 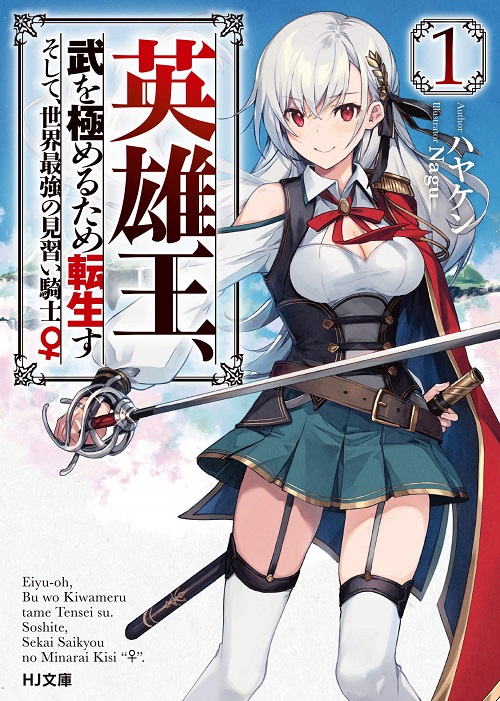 With the Goddess’ blessing, he became a 『Divine Knight』 and founded an Empire.
As time passed, he grows older, and by the time the heavens called for him to come, the Goddess showed before him, asking for his last wish.

He wished to be reincarnated in the future.
He dedicated all his life for his people, he had no time to master his own arts.
This time, he wishes to live for himself, forging his body to the utmost limit.

The Goddess complied with his wish.
In the far future, the King shall reincarnate as the 『daughter』 of a renowned Knight family.
And, under some circumstances, she is labeled as a failure of a Knight, however——

「How convenient. I can stand on the foremost line without needing any rank. No better training than actual combat!」

Thus, the legend of the world’s strongest, most beautiful Knight Disciple (♀) has begun—

One entry per line
Eiyuu-ou, Bu wo Kiwameru tame Tensei su ~Soshite, Sekai Saikyou no Minarai Kishi♀ ~
Reborn to Master the Blade: From Hero-King to Extraordinary Squire ♀ (LN)
The King of Heroes reincarnates to polish his skill to the limit and becomes the strongest knight in training in the world ♀
英雄王、武を極めるため転生す ～そして、世界最強の見習い騎士♀～
英雄王，為了窮盡武道而轉生～而後成為世界最強見習騎士♀～

Hero’s Redo ~ A Hero That Once Saved the World Reborn as a Girl ~ (3)
Reborn as the Hero’s Daughter! Time to Become the Hero Once More! (WN) (3)
She Professed Herself The Pupil Of The Wiseman (WN) (2)
Dragon’s Bloodline (1)
Sword Saint’s Disciple (1)
Demon Sword Maiden (1)

These are recommendation lists which contains The Hero King, Reincarnate to Master the Art of War ~And Thus, I Became The Strongest Knight Disciple (♀) in The World~. You should give them a visit if you're looking for similar novels to read. Alternatively, you can also create your own list.
More Lists >>>

I don't understeand why the people under in the reviews think that way "not recommended for boys" like what the hell, that is totally BS, as a guy I trully enjoy this novel. Altough I have to say that the gender bender aspect is a guilty pleasure for me at least. I generally like a novel were the MC is op and interesting, in terms of bland characters I would disagree. I also like the whole magic systeem and how ether works. In Conclusion you could say that I disagree with all... more>> the negative points that were said by the (earliest) first two comments <<less
9 Likes · Like Permalink | Report

I really like the setting for this novel. Former king returning to the land that once was his kingdom after being reincarnated in unspecified future in order to perhaps pursue a different path and maybe witness the legacy of his previous life. I think it has great potential. The world building isnt great but it is there. You have Nobles, the Knight's Order, the enigmatic Highlanders, Magical Stone Beasts there are runes and artifacts that knights use to battle said stone beasts. At least there is no "game skills", levels and... more>> adventurers guild as of yet (c33). Characters are really bad. Main characters are cliche one dimensional bundles of tropes. MC is overpowered goofball with no accountability for anything doing whatever comes to mind. Calling secondary characters shallow would be unearned praise since they have only flat surfaces. Story is predictable and linear filled with repetitive and meaningless happenings. Overall it is a cliche feel good story about overpowered main character that is perfect in everything except few minor things that in the end wont matter. I wouldnt recommend this novel to anyone that has developed critical thinking and cannot simply follow the story without questioning it. As sahs228 said in the other review I do not recommend it for boys. I dont know sahs228 reasons for it but for me it is the misandry coming not only from the author but also the translator team. <<less
9 Likes · Like Permalink | Report

Hero King is the story of a past king reincarnated, tired of the stifling life of authoritarianism, she seeks naught but the thrill of honing her martial prowess and fighting powerful opponents. A once wise king, now reduced to a battle-hungry maniac who lives solely by her own rule. Inglis was reincarnated far into the future, where the kingdom she once ruled was gone from the annals of history, the people around her had all but forgotten about the magic techniques she once fervently spread around, and most of all,... more>> the ground nation now lives in fear of mutated beasts known as Magic Stone Beasts and had to rely on the technology of the Highlanders, those who live on a floating island, to fight back against these monsters. What happened to her kingdom? Why did people forget about magic? How or where did the Highlanders or Magic Stone Beasts come about? While all these questions are of interest, but does Inglis care about them? Nay, all she cares about is to fight against the strongest Magic Stone Beasts and hone her skills! <<less
6 Likes · Like Permalink | Report

Somehow, there is no explanation of being OP, and wanting a fight, without cause. the hero in the title is just a joke. first 10 or so chapters are so girly and feel good stuff and contrasts with the later chapters. Not recommended for boys.
6 Likes · Like Permalink | Report

TLDR: It's s*upid 2 STARS There's works that deliberately play with being bad, think of the airplane movies, Leslie Nielsen movies with OJ Simpson etc, Then there's works so bad they are good, Plan 9 from outer space, Chinese Mary Sue novels etc. Then there are works that are just bad. This is just bad. The only reason it gets 2 stars is the translation. How is this bad? Well let's start with the premise. You have a hero king whose one goal is to get better at swordplay. He reincarnates as a... more>> young girl and decides to hide his ability because if he doesn't THEY won't let him? Improve.🤷‍♂️🤦‍♂️🤦‍♂️🤦‍♂️ I get it nobody in Japan can say no and must do what they are told, choice is not an option. Anyway this is bad but bad can be redeemed. The author can transform it and transcend it. Look at Zorro or the Scarlett Pimpernel. The problem is that this author can't and reading this is all about watching things get progressively worse. It's a waste of really lucid translation <<less
4 Likes · Like Permalink | Report

Honestly, I know this one isn't a masterpiece but it's not as bad as what people reviewed here. MC's personality is one of the ‘weird’ one that people will rarely like. I've seen similar personality in Desumachi or Shinka no Mi; MC who are strong but not be bounded by their power. There's no heroic tendency, nor there are any notion of showing off their power for fame. Simply strong MC who have barely adequate moral values and like to do their business without minding other people's demands. That kind of MC... more>> usually incites two different response; either you loathe them or you're okay with them. In this case, seems like some people had just wasted their time reading something that doesn't suit their preference LOL <<less
2 Likes · Like Permalink | Report

I have no real issue with the premise of the story or the characterization of the MC. The main problem is the shitty writing. Examples: It gets two stars only because the premise was interesting.
2 Likes · Like Permalink | Report

The hero king reincarnate to master the art of war is soo misleading it should be the hero king reincarnate to became a meathead battle frenzy..... Why? Cause MC just keep going brawl than using her head, she doenst give a F whos the villain she only cares to fight whos the strong.. The plot too is s*upid Same old cliche, they just change Male mc=male spirit but female appearance Demong race=high lander
2 Likes · Like Permalink | Report

it is story about super duper op protaganist fighting in serious world with comedy keep things together. eminient of shadow and one punch man are good examples of this done right firstly, the protaganist in this troupe must have something he stick and emphasize with. pure mary sue is boring after all. heroism for saitama and childhood's fantasy for lord shadow. but this hero king girl only has urge to fight everyone.... that only work if she's underdog you know. like son goku from dragonball always got beaten up by new enermies.... more>> but she's op.... second, the comedy. all I can tell is it's really dry. art of crafting words to get specific emotion response is above me. but I notice it try to pull off 'this is too absurd!' comedy and fall flat. TL;DR go read dragonball <<less
1 Likes · Like Permalink | Report

Eh. I would've loved this if there was a male deuteragonist that isn't the MC's cousin. Plus the "x monster/ x beasts" plot is so overdone by now. I already had my fill with that during the battle harem era. I sticked around to see more of the traitor character who is the only interesting character so far plus how the living weapons work. Well guess what, the author never shown how they work nor there's any art or design for their real weapon forms. A shame really. MC is cute... more>> but the author can't flesh out her feminization more. And it's Yuri so fml. <<less
1 Likes · Like Permalink | Report

Ok from the other review I sort of understand what they don't like, I will put 4 stars because it is good but be prepared. Even if not the real title, the title of this novel would be: "Ex-Hero king, the greatest battle junky can finally fight"... more>> Basically it sorts of meets your expectation in terms of knowledge of a king sometimes, the thing is that know from the story, the king is just a knight originally. And in the story, she just is the biggest battle junky in the world. I personally like it, but I admit, because she just want to fight, there seem to be a lot less of a king, which could make another story of it's own. Edit: to simplify my comment, its good, but it doesn't give you what you came for <<less
1 Likes · Like Permalink | Report
Advertisements
Leave a Review (Guidelines)
You must be logged in to rate and post a review. Register an account to get started.