Novel Updates
RegisterLogin
Theme
Search
Your changes has been saved.
Advertisements
The Frog Prince and the Witch

Home >
Novel >
The Frog Prince and the Witch 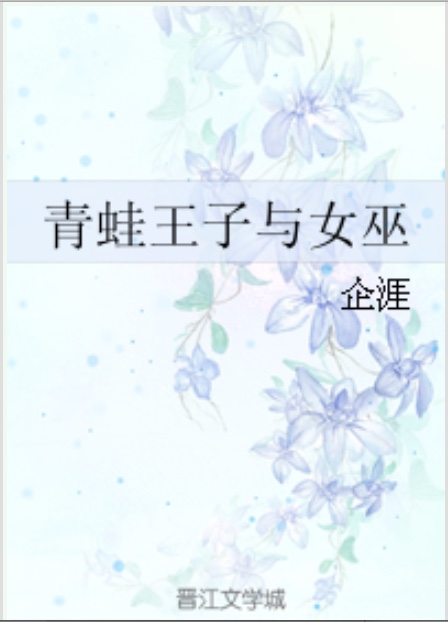 One entry per line
Qi Ya
企涯

Status in Country of Origin. One entry per line
29 Chapters (Completed)

No name, no body, no voice.

Finally he received his redemption.

But he was still unsatisfied, because of his greed… he still wanted more!

It doesn’t matter if he’s treated as a madman.

He’s got nothing to lose anyways.

She is the only one he has.

One entry per line
青蛙王子与女巫

Rebirth of the Tyrant’s Pet: Regent Prince is too Fierce (2)
Guide to Raising a Supporting Male Lead (1)

These are recommendation lists which contains The Frog Prince and the Witch. You should give them a visit if you're looking for similar novels to read. Alternatively, you can also create your own list.
More Lists >>>

A fluffy story and nice twist on the classic fairy tale of the princess and the frog. Although... ... more>>
Spoiler

Even though the story tried to reason out the prince's obsession with the witch it still feels like those romantic feelings sprung up from nowhere. I understand being grateful towards your savior and the change trauma can have on a person but it can feel a little bit much.

Also is it just me or has the prince become similar to the evil witch in terms of their obsessive feelings even if they have been expressed differently.

However for a short story that you can finish quickly the story is pretty decent. <<less

The chapters are short, easy to read and the story is similar to that of Princess and the Frog with a heavier tone... ... more>>
Spoiler

It's a story of a Prince who got turned to a frog because of a madwoman. The woman was in love with the Prince, kidnapped him, tortured and locked him up so she can have him all to herself. Though nothing too detailed, but there are hints of (as mentioned) torture and rape. This woman disgusts me to no end.

Anyway, there was a chance came and the Prince escaped. Unfortunately, he was caught by the madwoman and she cursed him into a frog... a frog that no one wants. Of course, except for MC... who happens to also be a witch, but the good kind of witch who has a soft spot for animals and helps them.

The conflict with the evil witch gets resolved early on, around Ch. 18. And the remaining chapters involved developing the romance as well as the other conflict with how to report the situation to the King. Ofc, the Imperial Palace had been worried sick with the Prince's conditions, even put up posters in search of frogs (suffice to say, the Imperial Palace already knew what happened). However, after the Prince became human again... he doesn't want to go back to the Palace and just want to stay with the MC.

There were some inconsistencies with the time, but ofc it might just be me and my faulty reading so I didn't put much thought to it.

[collapse]
Besides the dark undertones and the shitty evil witch that makes my blood boil, the progress was good. It was better than expected and, given the situation, appropriate, believable and not at all rushed. And I really appreciate it that the Prince didn't go mental from all that torture. My heart ached for him.
Spoiler

For some reason, Prince Ian calling the MC 'owner' afterwards didn't sit well with me. Idk if it's just me but I really don't like it with the master-servant addressing, even if it's just a way of addressing. Here we have a man who was broken, a Prince tortured and changed. I can't bear imagine the trauma. But ofc, it gets better.

[collapse]
If I could, I'd go in the story and kill that evil witch myself. I really appreciate the MC. The 'healing' somehow reminded me of Second Master, for some reason. It was good and beautiful. Anyway, despite the dark tone at the start, I still consider this a relatively light read in a sense that there are no heavy dramas, doesn't dabble with unnecessary theatrics, with the added typical fairytale fantasy flare. lol I appreciated some changes from the original tale here and there. I was surprised this was originally CNN, given that the ambience feels more like a JPN to me. It's also an HE, not too grand, just right but I still find beautiful. And the translation was good too! Hence, to this, a full 5.0 rate! :D <<less
14 Likes · Like Permalink | Report

Interesting novel based lightly on the frog prince classic. I say lightly bc it's an entirely different story so you don't need to worry about reading a plot that has been done. Male lead's point of view, and good character development, realistic reactions and feelings of the characters. its a chinese novel too so it feels infinitely different to Japanese takes on "princes and dukes daughters" etc.
9 Likes · Like Permalink | Report

I actually cried when the prince is pining over the witch. He really obsessed with her but he do not hurt her like what the duchess did to him since that is what true love really is.
4 Likes · Like Permalink | Report

Found this by accident, was looking at this translation site for other works. I'm glad I read it out of boredom, it is very short and has a nice story line. The translations are good too, not machined translated. I wish the rest of the series was translated, it only has 9 chapters left. This is also missing a tag, the villian is an extreme yanderes which is the main mechanism behind the story.
4 Likes · Like Permalink | Report

This is a nice novel that draws people to it and the translater is really good at this. I really like it because it is not the same plot as what you think it is and thats what makes it more and more interesting
3 Likes · Like Permalink | Report

A darker twisted version of Princess and the frog, with a light hearted fluff during the time that the prince heals
2 Likes · Like Permalink | Report

It really simple and short read romance novel. It point of view of prince frog with witch and he thankful to meet gentle lady after madwoman. It nice to see view on man who might had bad experience situation to savior person and how he keep hold small light hope. Just one regret that I would like to see one more chapter for after end.
Spoiler

It's a very good short story. The relationship between the witch and the prince is so adorbs. Read it!
1 Likes · Like Permalink | Report

A very brief yet interesting take on the Princess & Frog story. Ian was obsessively in love (in worship?) but didn't do anything untoward or forcefully. He sure suffered a lot though, poor guy. Would like to see their life after the ending, seems like it would be fluffy. ^ ^
0 Likes · Like Permalink | Report

Very good. Fluffy and cute story but not in the beginning. The original author even read the English translation. She/he commented on chapter 20.
0 Likes · Like Permalink | Report
Leave a Review (Guidelines)
You must be logged in to rate and post a review. Register an account to get started.

The Hunter That Returned From Hell
Advertisements