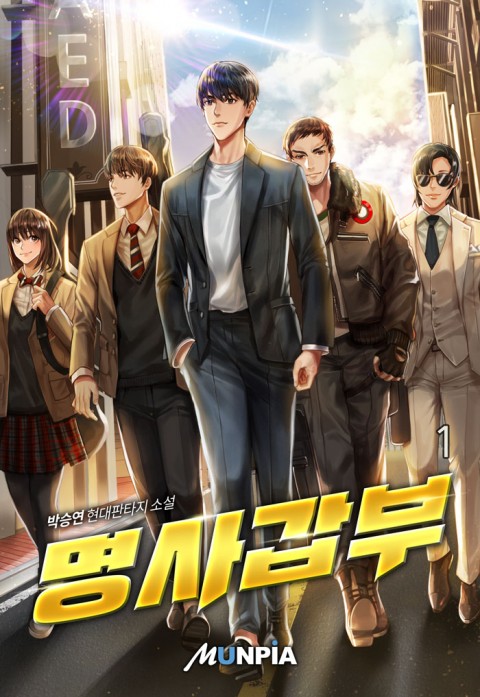 One entry per line
박승연

Status in Country of Origin. One entry per line
13 Volumes / 316 Chapters (Completed)

Miracles don’t come walking your way by themselves.

It is your decisions and will that determine these.

A story of a man who created miracles.

One entry per line
명사갑부

These are recommendation lists which contains The Famous Millionaire. You should give them a visit if you're looking for similar novels to read. Alternatively, you can also create your own list.
More Lists >>>

I am very disappointed. The protagonist's character is very weak and hard to like. He is the typical Mary Sue but without common sense. He has barely any confidence in himself and let's people mock him about his lack of education and identity. Also he is in his 30s yet has naive viewpoint in regards to everything. A major error in the business world but somehow thanks to his BS luck keeps making miracles. It's not really motivating to read. Dont get me started with the forced romance. The MC acts... more>> like a teenager in heat against female characters. It is garbage version of God of Money, I dont see how people compares it. What an insult to be honest. <<less
4 Likes · Like Permalink | Report

The MC was really a good guy, his family was rich before and unfortunately, it didn't last long because someone stole his father's technology and almost his whole family committed suicide but he was against the idea and said if he's gonna die then he's gonna die working, when he was 15 years old he had to work early with different jobs because of financial problems, one of the effects of that he became mature and good-hearted he was not keen on revenge as he realized he wouldn't really be... more>> happy even if he got his revenge, his dream is to become a saint helping people. At the start of the story, he was 30 years old and along the way has helped a few people, he has a good reputation in their community, he was recommended by his previous boss who has a friend that owns a mid-sized company after his business (former boss) a wood furniture shop was decimated by fire. He got hired and got put in a purchasing department and the job there is for the accounting of goods, export, and import, etc. Because he was only a high school graduate he does not really know the work itself as you really need to be at least a college graduate to know the work as there's a lot of terms that he does not know, but it does not mean he's dumb, he knows how to be able to learn his job, he's innovative and resourceful. @CocoButter
- This is one of the reviewers that does not really have any experience in his/her real-life and does not really know how to give a review but an opinion. The MC has a bit of low self-esteem as he is only a high school graduate but he's still strong, he knows his strengths and weaknesses because of that he was really resourceful on how he takes challenges, and I also want to disapprove this reviewer @CocoButter that the "The MC acts like a teenager in heat against female characters." As the MC only focused on his revenge at first (before the start of the story) and work he does not really have an experience in romance. The MC has a dream it's unrealistic so he does not really say it to anyone but he still believes in it. This novel is not focused on revenge, it's much focused on how the MC worked his way to become better and successful even if he has a really bad start. This novel is pretty realistic he does not have any system to help him or a second chance tag and I can feel the author's feeling and experience of writing it. This novel is really focused on his work as he tries to learn and overcome every difficulty and interactions with characters is really impeccable and real, character development is really on point. The title of "The Famous Millionaire" is kind of a clickbaity title as the story including the background story started from really rags to riches as he was only a high school graduate. You can't even compare this novel with God of Money especially 12 Hours after as both of the MC's are educated and has a cheat tag "second chance", "system" and because of that the MC's are too efficient in their life that the author didn't really focus much on character development. <<less

So apparently I read this novel already but it was under a different name, so just gonna copy my review here. This is a business, slice of life, modern day, drama story. ... more>>
Spoiler

MC is highschool graduate who ends up doing all sorts of jobs to make money after his parent's accident and his father's business failed / got his idea stolen. His current job at the woodworking shop gets accidentally burned down, and he finds a new job at like a purchasing company. MC knows nothing about his new job and learns from people/friends he helped in financially tough times.
Various newly hired employees (who have better academic achievements compared to the MC) dislike MC at the job and try to get 'ruin him'.

[collapse]
I was disappointed with this novel as tags I read them under was misleading but looks like tags are ok and updated now. However I was hoping for a revenge sort of story but it just has petty drama <<less
1 Likes · Like Permalink | Report

It started solidly, went well towards the middle, then became rather idealistic at the end. It didn't feel like the author knew how to end it. All the same, a very satisfying read.
0 Likes · Like Permalink | Report
Leave a Review (Guidelines)
You must be logged in to rate and post a review. Register an account to get started.