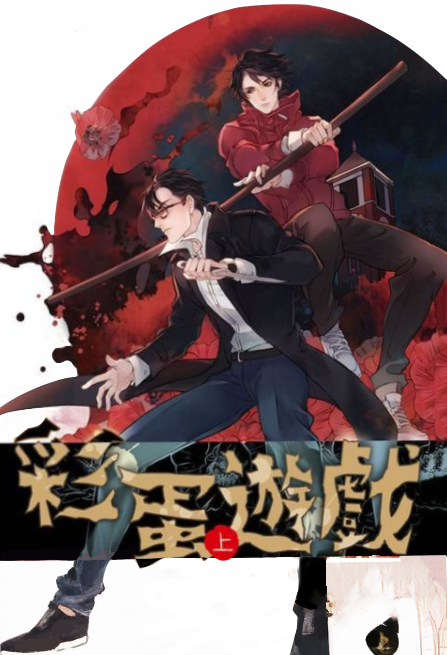 One entry per line
薄暮冰轮

Book 1
———
On the day he received the Easter Egg, Lin Jue’s entire life changed. That nightmarish night, everyone in the school became zombies apart from the thirteen who had received an easter egg. It wasn’t because of a deadly virus, but rather a cruel game. Unable to leave the school, they were able to find a bargaining chip for life in the plaza. The prowling hunters in the dark were not the most fearsome opponents, the hidden Judas in the survivors was the most deadly. As everyone died one by one, the survivors struggled, waiting for dawn.

Book 2
———
It was a nightmare- in a sealed off university campus, the thirteen who received easter eggs were trapped and forced to fight for the sake of seeing the next sunrise. The Judas hidden among the players, the enemies that surrounded them on all fronts, the companions that were ready to turn against each other…

When Lin Jue woke up on his dormitory bed, there were no wounds on his body; everything from the previous night had just seemed like a dream. But Lilith was still giving out her easter eggs, and Song Hanzhang and Lu Ren were already there. The second round was just about to start. It turned out that all of it, all of it was real.

These are recommendation lists which contains The Easter Egg Game. You should give them a visit if you're looking for similar novels to read. Alternatively, you can also create your own list.
More Lists >>>

I thought I'd put down a comment since there weren't any. I'm enjoying this a lot, it's pretty slow burn and a lot more about surviving the horror game. It's short and interesting, even this close to the end I don't know how things will end. Also the game they're playing is very mysterious, you don't really understand the mechanics of it throughout but that sorta makes things just scarier. I like it so far. I'm scared for what I'm assuming are MC and ML but it's so interesting Edit after... more>> finishing it: the ending was very satisfying!! I liked where it went in terms of finishing this arc but it leaves you waiting for more and I think there's two more volumes. <<less
3 Likes · Like Permalink | Report

I give 3 stars for an interesting storyline and appreciate the writer and translator. But, sorry to say, I really don't like the MC in this novel. I tried to like him, but it didn't work even after I finished reading. I can't explain it, but there was something in his character that made him look annoying to my eyes.
2 Likes · Like Permalink | Report

This is actually a definite read! I decided to give it a try at like 2 in the morning, gosh I scared myself (T-T) my favorite character is Lu Ren hahaha. Anyways MC and ML really had that sexual tension but since this is a short novel with 30 chapters don’t expect them to go all they way either. But all in all it was an amazing journey to read!
1 Likes · Like Permalink | Report

It's veryyy goood, really recommend it. I don't know why the rating so low (4.1) But this story really worth 4.4+ rate, but I kinda dissapointed because it's just have 30 chapter 😞. I really hope there more arc
0 Likes · Like Permalink | Report
Leave a Review (Guidelines)
You must be logged in to rate and post a review. Register an account to get started.