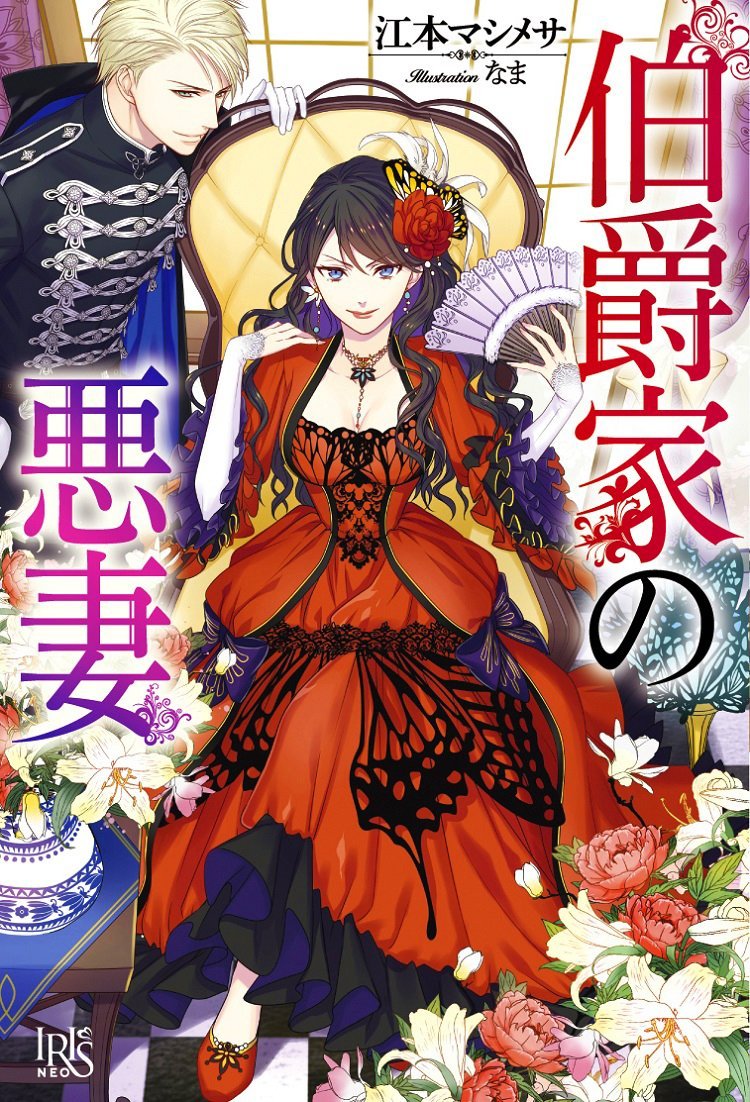 One entry per line
なま

Status in Country of Origin. One entry per line
35 chapters (Complete)

The marriage arrangement introduced to the duke’s daughter, Hermina, had been to the rumoured worst playboy in high society, the Earl’s son, Erich. Hermina, who accepted the offer, sends him a letter with conditions for their married life. The letter had nothing but unreasonable demands, but Erich says that he’s happy and that he’s looking forward to their married life…!?

「I’ll become Hermina-sama’s dog or manservant for the rest of my life」 — what is this guy saying!?

Isn’t this just fluff between a beautiful intense wife and a con-man husband? A newly-wed love comedy.

One entry per line
伯爵家の悪妻

Kenkyo, Kenjitsu o Motto ni Ikite Orimasu (3)
I Reincarnated into an Otome Game as a Villainess With Only Destruction Flags… (2)
Return of the Female Knight (2)
The Male Lead’s Villainess Fiancée (2)
An Otome Game’s Burikko Villainess Turned into a Magic Otaku (1)
Breaking Off the Engagement… Bring it on! (1)

These are recommendation lists which contains The Earl’s Bad Wife. You should give them a visit if you're looking for similar novels to read. Alternatively, you can also create your own list.
More Lists >>>

Only two chapters in but I'm quite interested. I was probably sold by the art cover since she sends like such an intense and determined woman... But I like how she is portrayed and how much she loves her family. She actually reminds me of the strong and independent wife in the series Hokuou Kizoku which I also recommend! I think this novel will be giving people some diabetes with the sugar and I haven't even seen the so called playboy fiance yet! I look forward to more chapters to see how... more>> their relationship will play out, so five stars for now to get people interested to read! <<less
20 Likes · Like Permalink | Report

Please avoid my review if you want to read it fresh eyes. There may be minor spoilers. Since this isn't fully translated yet, there is a possibility that my rating or thoughts might change. First thing's first - plus points for no reincarnation! The setting is pretty generic as it goes, but that's not the main charm of the story; that lies within the characters. Though I prefer my stories to be a mixture of character-driven and plot-driven, this falls primarily under the former. The execution is good, though, so I... more>> have no complaints. The main protagonist is likable enough; she's well aware that her demands are unreasonable and goes forward to her marriage anyways. Her relationship with her family and friends makes her more human-like, likable, but it doesn't define her. The male lead is likable enough, respectful in a way many other leads aren't. Though that might be because he's an M. Their interactions were a joy to read. There are a few grammatical errors here and there (like a comma outside quotations), but it's nothing major. This is meant to be a lighthearted read with a comedic backdrop. If you read it as it's meant to be read, you'll probably enjoy it. Some faults lies in its lack of an in-depth world and politics (they're nobles!) and the (lack of a) reason of why our protagonist is so determined to make things difficult for her fiance when she herself accepted the engagement easily. Regardless, it's an entertaining story. <<less
13 Likes · Like Permalink | Report

I am actually kinda mad and baffled at the audacity of the maid of a woman who took advantage of the rumours and pushed the burden on someone else hand. You f*ck someone else that you shouldn't and beg others innocent bystanders who are ignorant of the truth to take the responsibility of the hot potato? So it wouldn't soil your own image? You loose woman. A married woman shouldn't f*ck a boy of such a young age. Period. Take responsibility and raise your own son yourself, a little bit gossip from ppl won't make you less of a person. If she had been our world she would have been arrested for molesting and other serious crimes. humpf!

And that pushover of a husband... get your act together man 😓 and solve the issues before they become a mountain. this just makes me unnaturally pissed off. There is a line that one should never cross b*tch, bringing one responsibility and work home is just one of many, asking your married life to turn to hell.

Quote from the games of thrones "the king shits and the hand wipes". Although the male MC is not the hand of the king but of a prince, the situation fits strangely. I would rather remain a single woman then be with a guy who cannot even take care of his image and would be a sandbag for someone. But alas, the heroine is just so heroic. Bless her soul.

Not bad so far. I could say that this novel is one of the better ones you can find, and the translation is well done. The plot is cute and the story is a great, casual read. The heroine is not an antagonist by the way, but instead a well-bred lady with class that has doubts with her chosen fiance which led her to write unreasonable demands. Its more understandable if you read the story, though. She's not bratty or had any nasty personalities (so far) that particularly stood out. The... more>> ML is mysterious for me, as I can not really ascertain his personality, especially after reading chapter 9 (no spoilers). I like him though, and he also has no particular personality that I dislike. I look forward to seeing this novel's updates. Hopefully it won't turn too cliche (which, so far, isn't). <<less
5 Likes · Like Permalink | Report

oh god im so done w this 🙄 the only reason why im not giving this a one star is because of the amazing translation. Okayyy I have no where to start bc of all the complaints I have with e-v-e-r-y s-i-n-g-l-e character in this novel excluding the mc's sisters (I hope, I haven't read that far). I have no idea why no one cares about the maid and the mc's actions!! Oh god I feel so vexed and just angry and irritated and the other review w the... more>> 2 stars by Marikosebas explains it nicely! I have no idea where that god damn maid got the audacity to do what she did and just omg im not even going to try to explain but wtf bro. I recommend not reading periot. im usually not this frazzled but I am and cant even write/explain anything properly so sorry but I just cant w this novel <<less
2 Likes · Like Permalink | Report
Leave a Review (Guidelines)
You must be logged in to rate and post a review. Register an account to get started.