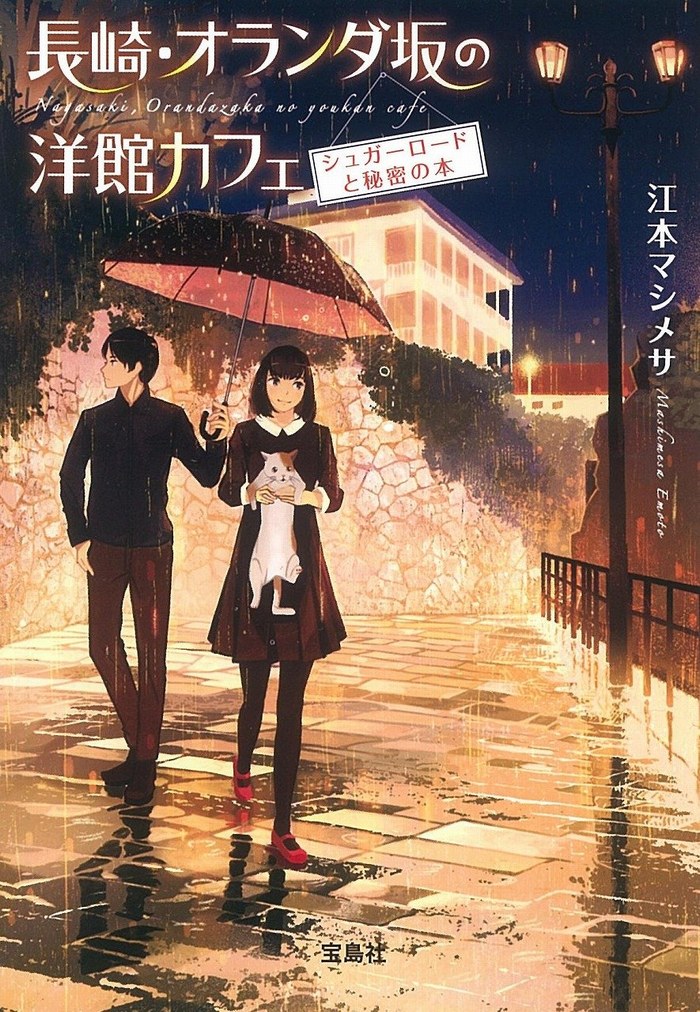 Status in Country of Origin. One entry per line
Completed (30 Chapter + 3 Extra Stories)

There was a cafe called the “Evening Rain” in a western-style building at the end of a narrow street on the Dutch Slope. On a rainy night, a university student who lost her way by chance met a strange shopkeeper.

A mysterious cafe with a strange attachment to evening rain, the “Evening Rain Cafe”……because of it, she got to learn about Nagasaki’s variety of traditional confectionery.

Eventually, she came to work at the shop, but the shopkeeper had an amazing secret.

A story of a sweet relationship connected by sweet confectionery begins here.

One entry per line
The Western Cafe on the Dutch Slope, Nagasaki – Sugar Road and Secret Book (LN)
長崎・オランダ坂の洋館カフェ〜シュガーロードと秘密の本〜

The Heartbeat at the Tip of the Tongue (1)

These are recommendation lists which contains The Dutch Slope’s Western Cafe. You should give them a visit if you're looking for similar novels to read. Alternatively, you can also create your own list.
More Lists >>>

If you are a foodie... If you love confections~ bakeries~ cakes~ sweets~ × tidbits of Japanese culinary history~ If you love slow, sweet novels that are filled with fluff the way a fluffy piece of Castella might melt in your mouth~~~... more>> this is the novel for you! o (〃＾▽＾〃) o Not gonna lie, the whole time I was drooling and googling up images of all the delicious confections mentioned, as well as how they got introduced to Japanese (Nagasaki) culinary culture. The translation is really excellent and the pastry descriptions will leave you craving to try their sumptuous textures and flavors! *goes back to staring at recipe for pomelocello*
Spoiler

There aren't any major conflicts and or any cannon-fodders. The main character is painfully shy/hesitant type, so she doesn't take initiative until forced by her friends. But even though it's not my preferred MC personality, it wasn't written in an irritating manner so I thought it was fine.

Very sweet, slow build romance. Love the setting and atmosphere of this. Japanese foodies cant miss this.
0 Likes · Like Permalink | Report
Leave a Review (Guidelines)
You must be logged in to rate and post a review. Register an account to get started.