Novel Updates
RegisterLogin
Theme
Search
Your changes has been saved.
The Court 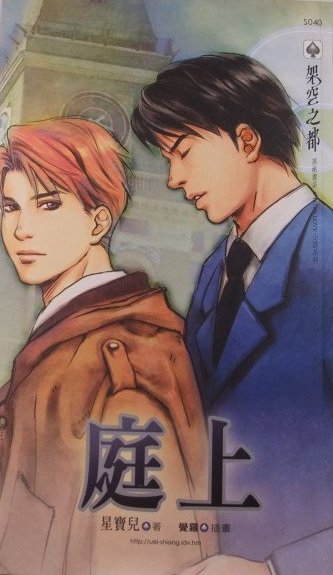 Status in Country of Origin. One entry per line
10 chapters (Completed)

One entry per line
Uei Shiang

Working in judicial field, the young prosecutor, Wei Cai in court had a majestic, imposing appearance.
However even he got good appearance, he was actually a troubled aging bachelor who had a problem finding a girlfriend.

An accidental opportunity that caused him, Wei Cai, beaming with joy who had rushed to go to the Colleagues Introduction Fellowship Society or commonly known as matchmaking ceremony.

However, he not only failed to meet a beauty, but he unexpectedly met his work opponent —— young and handsome lawyer, Li Jia De. Accidental encounters with a common interest had gradually narrowed the distance between these two.

Didn’t let others to have frivolous desire, nor let people pay all of their passions, both of their feelings slowly grow from nothing until unknowingly crossed the boundaries of friendship. On the court, they exchanged heated verbal debate, and off the court they show full of tender feelings; legal principle and emotional battle, it is so wonderful that you cannot miss it.

One entry per line
庭上

These are recommendation lists which contains The Court. You should give them a visit if you're looking for similar novels to read. Alternatively, you can also create your own list.
More Lists >>>

3 stars, it's a decent story but nothing really extraordinary. The first chapter was really good. I have to say that there is a good amount of themes going on for such a story: Wei Cai deals with 1) Being an unmarried 30 yo man trying to find a match only to be always reminded he is not wealthy or good looking or interesting enough 2) Society's expectations of him on the workplace and love life 3) His own feelings for Li Jia De that he forces himself to ignore and forget... more>> because following them would ruin his carreer which only leads to more pain. It's HE so don't worry. I also feel like the translation is not the clearest so that didn't help? In general... you can read if you really have nothing else better to read. I did only because I'm reading all Xing Bao Er's works. <<less
0 Likes · Like Permalink | Report

Wei Cai is a prosecutor with little awareness of personal rights and is rescued from an akward situation from Li Jia Die, a defence lawyer. Working alone in a big city, and lacking the capital to marry comfortably, he quickly enters into a murky friendship with LJD, but is uncomfortable with the stigma associated with a romantic one. The MC is not particularly smart... but apparently he’s good at his job, so maybe he’s only muddled over love and common sense? While his love interest LJD, is the gentle and mature... more>> type who slowly woos the dense MC, and must wear down his resistance before they can enter into a real relationship. There’s not a lot of action or drama for yaoi, but it is quite sweet – as expected of the gentle seme x stubborn uke combination. Though it was a little sad how they used other people’s misfortunes to boost their own relationship... There’s nothing particularly offensive, nor is there anything remarkable about this series but it’s a nice read. Could use more humour though, and started better. <<less
9 Likes · Like Permalink | Report
Leave a Review (Guidelines)
You must be logged in to rate and post a review. Register an account to get started.

Let me make you a Star