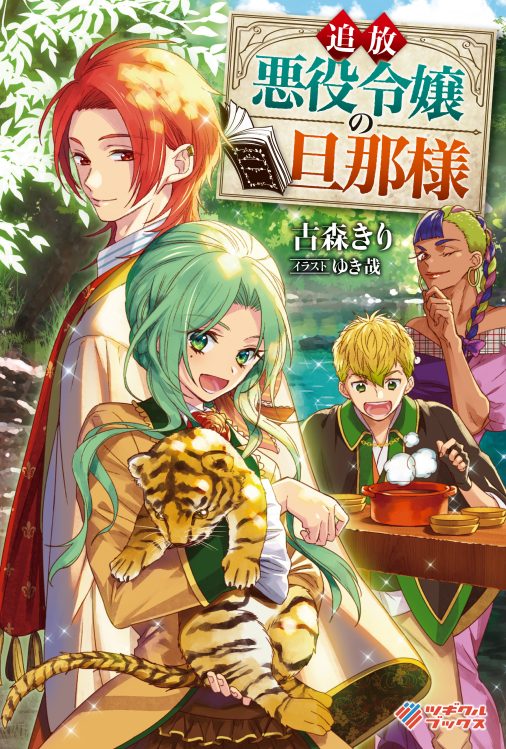 Said the crown prince Alfred while pushing his fiancée Elana at the graduation party.

She whose engagement canceled was out of luck, reaching out her hand.

The following day she was married and banished from the country for numerous reason.

Banished to the neighboring country, living a relaxing farm life!

……However, there seem to be something strange happen behind her back.

This is the story about my unlucky and happiest day became her husband.

No no, that’s not happening.

The Villainous Daughter’s Butler ~I Raised Her to be Very Cute~ (2)
Observation Record of a Self-proclaimed Villainess’ Fiance (2)
The White Cat That Swore Vengeance Was Just Lazing on the Dragon King’s Lap (1)
Expecting to Fall into Ruin, I Aim to Become a Blacksmith (1)
I Appear to have been Reincarnated as a Love Interest in an Otome Game (1)
I Became the Villainess’s Brother (1)

These are recommendation lists which contains The Banished Villainess’ Husband. You should give them a visit if you're looking for similar novels to read. Alternatively, you can also create your own list.
More Lists >>>

So the main protagonist is a mob nobleman who out of impulse decided to marry the Villianess immediately after her engagement with the prince had been annulled. As a result, both are exiled from the kingdom. With the help of the protag's distant relatives in the neighboring country obtained a farmhouse and thus began the couples commoner life. ... more>>
Spoiler

The protag was an inventor that got exploited by the Prince and his aides to make stuff to impress the Heroine. So when the news of their exile was announce he was glad that he could finally get away from the Prince and be with his long time crush the Villainess.

The Villainess is later revealed to be an transmigrator, her previous life is a business woman. The world she's in is based on an otome novel she read.

[collapse]
The story so far is okay. But the translation job in this story is bad that it hurts the experience overall. <<less
13 Likes · Like Permalink | Report

I have to say I'm very interested in this story and how it's going to go because the personalities of the two main characters Eufranc and Elana, the world building related to colors and dragons, and the leisurely slow building life of a common farm life and their romances are very appealing to me who is a big fan of the genre. Although I have to admit that translations for the story are a little bit hard to read because of the seemingly broken- English and some translation decisions like 'who... more>> is saying what' kind of derails some of the experience. The translations are okay, just not really good enough for a full good experience and I have to hold that somewhat against Foxaholic. <<less
5 Likes · Like Permalink | Report

Its a nice story relaxing story about a Noble who gave up his status for the villianess Ok I know what your thinking, but no he didn't love her or anything at first he just felt wow why is everyone assuming she did anything bad when they have no proof.. The MC isn't an idiot he understands the things from outside prospective. He worked behinds the scenes because he was that so called 'friend character' You know that character in games who is a friend and does all the work but the Main... more>> character get all the credit.
Spoiler

It's ok, I suppose. I would probably rate it 3.5, as it's readable and the translation is pretty good. It's not the highest quality writing, but the plot itself is decently understandable. Conversations with multiple characters can sometimes be difficult to follow as there are no tells for which character said what (eg., no '"blah blah, " the Prince said.'). Details are pretty lacking in general. As of chapter 3, the only character whose appearance was described is the female lead's, and even then it's limited to hair and eye color.... more>> Other characters essentially only get a name and their position, if they have one. Ditto for locations, they have very few actual details about them. If you're a person who likes to visualize the characters and surroundings as you read, this might frustrate you. If you don't tend to do that, I would recommend trying the first two or three chapters and decide if you enjoy it.
Spoiler

Elana's education also felt weird, considering she should have a lot of knowledge (as the MC notes). Honestly, between the sudden stumble and head-grabbing in the first chapter, and general lack of knowledge later, I'm guessing the FL might have undergone the 'transmigrated' trope or something. Hopefully it would eventually be better explained than just "she doesn't know a lot despite having been going through a queen's training".

The writing and the translation are fine but the characters and plot leave you asking "Where's the beef?" The novel promises comeuppance and revenge and fails to deliver. I am also really sick of the under appreciated character that doesn't get to shine trope. The MC is the equivalent, of Edison, Tesla, Babbage, DaVinci and Maxwell all rolled into one and he can't grasp the idea of getting credit for their work, Making this the one millionth novel to come from Japan with this trope.
2 Likes · Like Permalink | Report

Seems interesting so far. Both main characters seem like practical workers, which is nice. I'm looking forward to potential backlash from the initial marriage annulment.
Spoiler

The MC isn't the reincarnator, which is always fun.

Pretty decent. Good I mean. Good enough to get 5 Star. Not the most refreshing. Still isekai, buy using not much used PoV and believable story and track if event.
0 Likes · Like Permalink | Report
Advertisements
Leave a Review (Guidelines)
You must be logged in to rate and post a review. Register an account to get started.