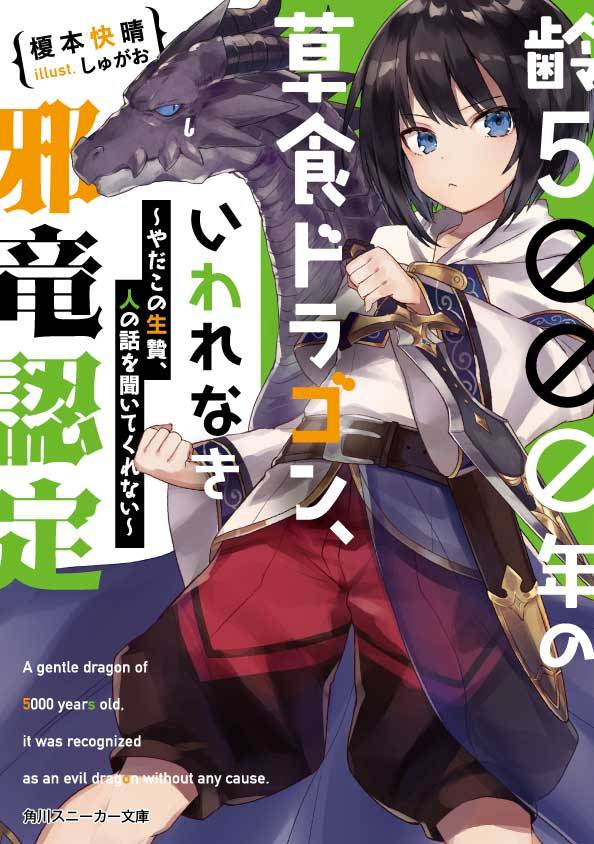 One entry per line
Syugao

Saying 5000 year-old-dragon has an impressive ring to it, yet that dragon was an extremely harmless, herbivorous being. However, because of his uselessly giant figure and scary appearance, he was mistaken for the Demon King’s executive and provided by the nearby village with a sacrificial maiden.

Fundamentally cowardly and timid dragon tried to send her away, but the extremely enthusiastic sacrifice didn’t want to give up. Inevitably, he lied: “Okay, I just ate a small portion of your soul, so you can go back already”, but the maiden with outrageous assumptions has misunderstood that she became the dragon’s kin.

Then, out of all things, she began to manifest strange power on the basis of her wrong assumptions – in turn, the helpless dragon, by some mistake started a rebellion against the Demon King.

Rebellion or whatnot, he wasn’t even his subordinate in the first place.

Reincarnated as a Dragon’s Egg ～Lets Aim to Be the Strongest～ (1)
To Be a Power in the Shadows! (1)
The Magus of Genesis (1)

These are recommendation lists which contains The 5000-year-old Herbivorous Dragon. You should give them a visit if you're looking for similar novels to read. Alternatively, you can also create your own list.
More Lists >>>

Mr. Logic is back here. And I can assure that this novel is quite worth to read if you need something to relax and laugh at its comedy. In the conclusion, this novel is worth to read to relax your mind. It is more funny when you read the manga adaption after reading this novel.
24 Likes · Like Permalink | Report

Eh... Okay, this is comedy and a web-novel... my expectations is rather low and I still end up unsatisfied. Comedy is really difficult to pull off and I rarely see it done well here. This is one of those comedy novels here that is not funny at all. Well, the situation has great potential for humor, but the author relies on low denominator jokes, often slapstick and schadenfreude, without a creative take or actual understanding of comedy. The jokes are delivered in the most unfunny way possible. The author is often... more>> desperate and keeps pointing out the jokes in the hopes that you will notice it and laugh at it. The thing is, if you have to point out your jokes, then you failed. So, the humor fails, what about the story... It was boring as well. It don't even feel like there is a story at all. The characters just talk and talk and talk. If something happens, then they'll talk some more, then op girl solve it with a wave of the hand, and they'll talk some more. Why can't everyone just shut up! And the characters, they are paper thin. The dragon is a wimp and the girl is an over powered idiot that is it. The worst thing is that the story is mainly about the interaction of the two. It is all about the dragon being a wimp and the girl being an idiot. Well, it is a JP web novel about a dragon. JP + web novel + dragon often equals to awful and this one is no different. At least it is harmless and inoffensive, therefore two stars. <<less
14 Likes · Like Permalink | Report

Everyone has seen OP dragon, weak small dragon train to be strong, reincarnated to dragon, reincarnated from dragon to human, strong dragon train to be even stronger, etc... In other Novel, Dragon is a being who only needs time to get stronger. But in this story, our MC, the dragon, despite living for 5000 years, but he is still super weak. This story is about the dragon misunderstood for being strong by a crazy little girl. Scared of dying or cause harm to the world, the MC must leave his nest... more>> to go on adventure with the aim to defeat the Demon King that he doesn't even know about after 5000 years of eating nothing but bamboo and grass and living a lazy life. I like this kind of misunderstanding. Will the MC be killed in the end or he will get strong enough to make the misunderstanding become real or he will have other ways to get out of this mess? I'm looking forward for more chapters of this. <<less
7 Likes · Like Permalink | Report

I noticed this when reading the manga a while back, but this is just horrible and actually does better in manga format because there's not much time to think about anything like you have when reading a novel. This is not even remotely believable. His weakness is just too much. He should be weak for a DRAGON not weak for a human. His entire existence is an impossibility even on a biological level. It stands to reason that he'd need the muscle power and body toughness to support his at least... more>> several ton heavy body. Even pretending that it's magic would be worthless as he would actually need powerful magic powers (something that he doesn't) then and as long as he's a creature, he would need to be able to at least live even if he runs out of mana/magic power. So, obviously he should be able to exert quite some strength brute force defeat weaker enemies or places, but this guy doesn't even have the power to cut down a tree, demolish a little house or resist arrows, even a mere pebble thrown by a child (the equivalent of a mouse throwing a piece of gravel on an adult human, however that'd work) somehow hurts really bad and this is clearly not a mere illusion born from a cowardly mind, it's actually the truth. I believe that in order for something to funny, we usually need to relate it to a normal situation and then find it to be absurd in comparison. That's one type of comedy and probably the most prevalent type. This makes sure that we actually have to accept that the thing in question is actually possible, however absurd it is. It needs to be believable to some extent. However, this guy is clearly not even a dragon in the first place, he's just a weak human dressing up in a hollow papier-mâché dragon. His scales are made of aluminium foil, his hide is made of paper and the rest of his body seems to be made jelly. He's pretty much a big piñata filled with money that everyone wants to hit. It just so happens that this piñata is accompanied by a crazy kid equipped with a machine gun that happens to think this piñata is aesthetically pleasing and thus she won't let anyone near. I also can't get to like the kid. Pretty much every single bit of "comedy" in this novel is stemming from the fact that she's going to keep on pretending that the MC is the most powerful and an evil dragon and thus forcing him to be one despite not being one in the first place. She's pretty much crazy with something resembling chuunibyou. That and how the dragon is weak and everyone reactions to them is the way the author is trying to appeal to his readers, the type of "comedy" you can expect. Because of this, we end up with a stale thing that just isn't funny at all and never changes its gags around for something fresh. It's an one-track record just replaying itself all the time. It was funny for one or two chapters before becoming less and less interesting and amusing. Even the characters aren't likable, I didn't feel attached or amused by any of the characters, the girl is overdone and so is the dragon. The author is forcing things to the point that it's just exceedingly unrealistic and feels cringeworthy and s*upid. I had to drop it after 12 chapters because it just wasn't getting any better, it was just becoming more and more monotonous. If you absolutely HAVE to read this, I recommend making do with the manga version as the pacing feels much faster, the gags work a bit better with illustrations and it just won't force you to think about things like the novel does. <<less
5 Likes · Like Permalink | Report

A ridiculously fun story about a comically weak but scary looking dragon that has many weird rumours to his name and an obsessed OP nutjob of a little girl that believes herself to be his follower and terrifies the living spirit out of him and pretty much everybody else they come across, causing the rumours about our herbivorous friend to deepen. All in all the story is lovely, heartwarming and really really fun. Also, the translator does a splendid job and release are quite frequent too
4 Likes · Like Permalink | Report

The story is about an overpowered girl, capable of incredible feats that could cause untold destruction, and her infinitely more powerful master, the evil dragon god. Yeah, no. Only half of that is true and that half is what makes this story great. I've always been a fan of misunderstandings as a cliche and this novel really pushes the border of the trope. One half of the main cast, the overpowered girl, is a delusional creature who lives to sow chaos. The other half is a rational and completely empathetic being... more>> who is capable of understanding the norms of those around him. The juxtaposition of the two brings a lot of comedy to the table and, so far, the story's using this is as the main point for the novel's focus. The pacing of the story so far is pretty good and it has introduced a minor but intriguing amount of world building. It doesn't go out of its way to narrate a scene for the readers and keeps its exposition to a minimal. The translation team doing this is detailed about their work so grammar mistakes are almost untraceable. Not much has happened so far storywise but enough has been done to keep me interested. I would definitely recommend this as a read and also suggest reading the manga adaption of this novel as well. It was the manga that got me here and I loved how the manga looked. <<less
3 Likes · Like Permalink | Report

It's a comedy novel first and foremost, and helps if you try and read it from that lens. You have an almost invisible yandere paired with a coward dragon straight-man. Although it should be a comedy, novel does lean heavy on the action to drive the plot. I think the novel is currently reaching the limits that can be achieved with the current status quo however. It is a decent read up to this point, but it isn't a particularly memorable novel.
1 Likes · Like Permalink | Report
Leave a Review (Guidelines)
You must be logged in to rate and post a review. Register an account to get started.