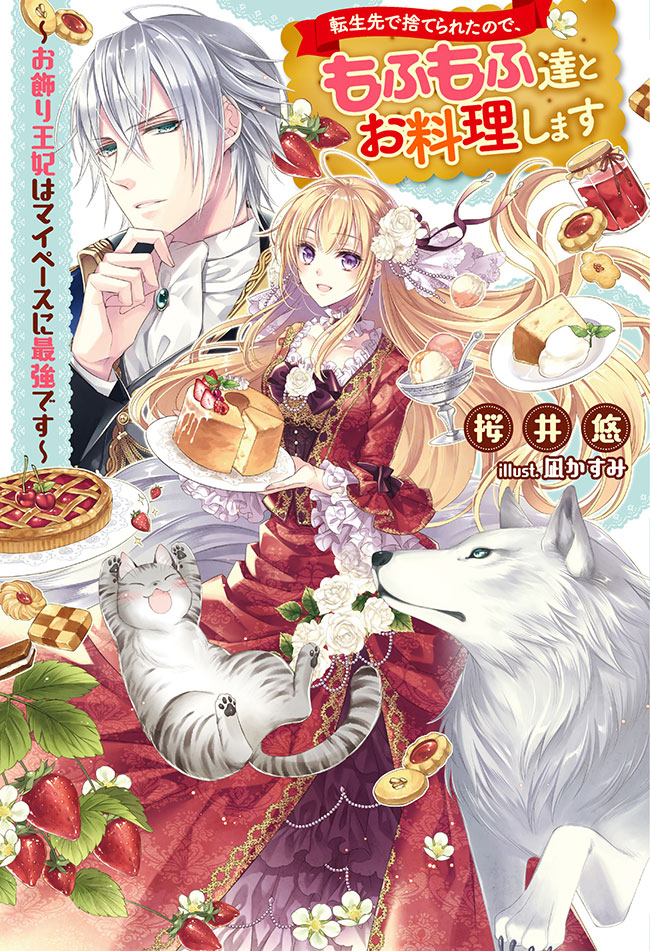 Status in Country of Origin. One entry per line
133 Chapters (Complete)

“Let’s have a vicious woman like you thrown out of the country.”

At the moment the crown prince broke off his engagement, The Duke’s daughter Leticia remembered her past life as a cooking-loving office lady.

After getting exiled from the kingdom, Leticia made her way towards the Silver Wolf King Glenreid, who was famous for hating women.

“Kept away from both the king and the politics, a queen only for show. Then, I’ll enjoy my hobbies and cook to my heart’s content.”

Leticia spends her days at her own pace, studying the magical power cheat that awakened with her memories of her previous life while also cooking delicious food in the detached palace surrounded by her fluffy friends.

However, one day, upon feeding a beautiful silver wolf, Glenreed’s attitude changed.

※ The story of a villainess who loves cooking, triumphing over her ex-fiancée using cheats while also being loved by the king who has the appearance of a wolf.

One entry per line
Since I was abandoned after reincarnating, I will cook with my fluffy friends ~ The decoration queen is strongest at her own pace ~
The Silver Wolf’s Queen, is a Cooking-Loving Villainess
転生先で捨てられたので、もふもふ達とお料理します ～お飾り王妃はマイペースに最強です～

These are recommendation lists which contains Tensei Saki de Suterareta no de, Mofumofu Tachi to Oryouri Shimasu ~Okazari Ouhi wa my Pace ni Saikyou Desu~. You should give them a visit if you're looking for similar novels to read. Alternatively, you can also create your own list.
More Lists >>>

Leticia is a really clever, formidable person, and yet she never fails to be funny sometimes. The people of her household (predominantly her butler and father) are really wonderful people, too. I hope to be able to see more of her brothers, and I hope they aren't taken by Sumia's s*upid lies - well, if they're smarter than the musleman and the simpleton prince, then I don't think they will. ... more>>
Spoiler

The part I really appreciate about it, aside from a new start in Leticia's life, is that she was able to deal with the foolish girl (heroine type) right off the bat - thanks to the heroine's impatience that made it possible, and her foresight to research further on her. Usually, it's either at the end of the story that I see her type getting her just desserts, or that for some reason, she is actually a pretty sly vixen who holds nothing but contempt and lies for the MC and wants to make her life miserable, so she plots and plots. She may not be or she might be just as extraordinary as MC, but she has enough resources to be a serious opponent. In here... she was shot down pretty quick. Leticia not only gets her greatest weakness and lie, she also is powerful enough to beat Sumia (?) 's light magic. She can't be beaten politically, and she can't be beaten in magic. In addition, she had already made it pretty clear that she cares not for Prince Fritz, but Sumia is indeed going to be crown princess but that's it.

[collapse]
Even if the new king she'll be wedded to is misogynistic, it's actually a pretty good deal since she holds no feelings for anyone in particular and can indulge in her hobbies. <<less
5 Likes · Like Permalink | Report

Very early Ik but no one have reviewed this great novel so I took it upon myself to write one. First off, her fiancé engagement breaking off is very cliche but originality been ded since forever so meh. So far the story is very wholesome and nice.
The translator’s grammar and stuff is on point. Keep up the good work!!! (I may or may not update this review if/whentheres more chapter is
3 Likes · Like Permalink | Report

So far it's really fun and mofu mofu filled! But it now has an official translation so the fan made group is dropping this...
0 Likes · Like Permalink | Report
Advertisements
Leave a Review (Guidelines)
You must be logged in to rate and post a review. Register an account to get started.